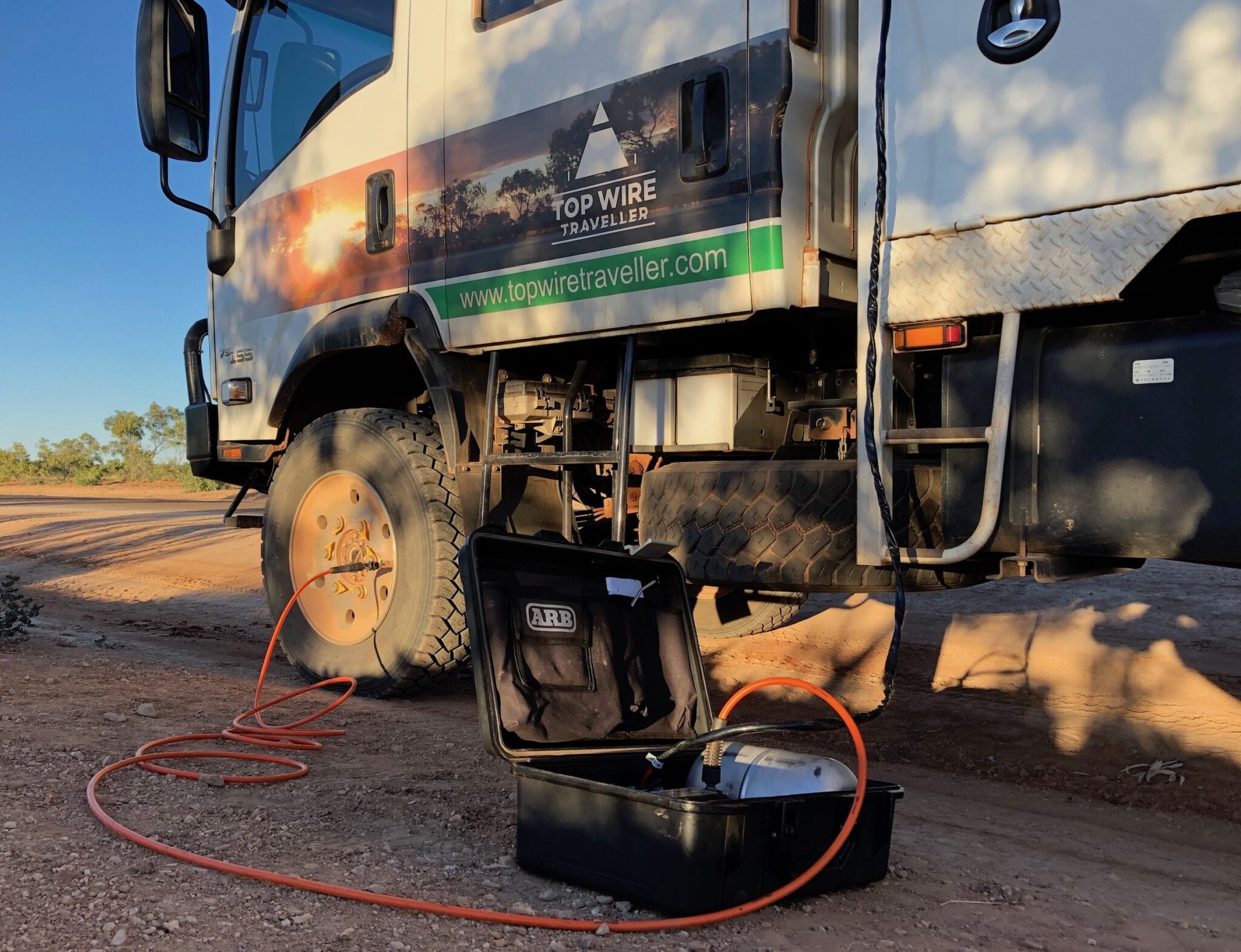 Do We Have A Lemon?

After owning and using our ARB twin compressor for 3 years, we’re really disappointed.

This unit has spent about 2 of the 3 years with one of the two motors either sounding like it’s full of marbles or with blown motor fuses.

We paid a premium price for what was supposed to be a quality unit. With much of our travel in remote places we wanted a reliable unit, something we knew would work every time. Yeah right…

And this unit has let us down on more than one occasion. So what have been the issues?

Buying Quality… Or Not

When we first bought this twin compressor, it seemed like a good deal. Yes, it was expensive. But ARB supposedly make quality air compressors.

We’d had an ARB single compressor mounted under the bonnet of our Pajero for years and it performed faultlessly. In fact it’s still going after more than 10 years of hard work.

This little unit is now installed in a mate’s cross country race car and still does the job faultlessly in a really harsh environment.

However, our twin compressor is a whole different story…

We bought the ARB twin in August, 2016. By early 2018, one of the motors was sounding pretty sick. It was making a horrible rattling noise and laboured badly.

Then the motor starting blowing fuses.

We finally had a chance to take it to ARB Wollongong for repairs in November, 2018. The proprietor Damien was exceptionally helpful. They tested the unit and determined that one of the motor/compressor units was dead. Damien kept me informed throughout the process and they replaced one of the units.

And I should mention ARB Accessories via Facebook Messenger were most helpful in getting me in contact with ARB Wollongong.

When we picked it up, Damien ran the compressor and showed me the problem. One of the bearings was buggered in the compressor, causing the motor to draw too much current and blow the fuse.

All of this was done under warranty. And there was no question of it not being done under warranty, as you would expect. After all, this expensive unit was only a couple of years old. ARB Wollongong’s customer service was exceptional.

Problem solved… or so we thought.

Our “trusty” ARB twin compressor ran faultlessly for a while. But by May, 2019 the other motor started blowing fuses.

This was getting ridiculous.

If you’ve ever tried to re-inflate four truck tyres with a small single compressor, you’ll understand what I mean. Especially when you’re in the middle of nowhere and you’re hoping the one remaining motor doesn’t pack it in too.

So there we were somewhere in the NSW Corner Country in April, 2019… pulled over to re-inflate the tyres.

I started the compressor and the other (original) motor made some horrible noises then blew its fuse. Here we go again!

This time I didn’t even bother replacing the fuse. I just ran it from one motor for a month or so, which is a painful exercise when you’re re-inflating 4 truck tyres a couple of times a week.

We were vaguely heading towards Alice Springs, so I decided to give it to them to fix. What a mistake that was.

ARB Alice Springs were absolutely useless. There’s no other way to describe them. The bloke I was in contact with (and I use the term “contact” loosely) lied to me, wouldn’t return my calls and basically didn’t care. Every time I spoke to him, he changed his story.

He obviously thought we were just another traveller who would disappear and never return. He wouldn’t know the meaning of customer service if it punched him in the face.

And that made me pretty angry.

In the end, he supposedly contacted head office in Adelaide (I thought head office was in Melbourne!) who agreed to replace the faulty motor/compressor assembly “as a goodwill gesture”!

I think the term they should have used is, “We’ll replace the faulty motor/compressor because we agree this unit is a complete piece of crap”. That would have been more accurate.

And there is such a thing in consumer law as “fit for purpose”. Our ARB twin compressor definitely hasn’t been fit for purpose for much of its short life.

Far from doing us a favour from the goodness of their heart, they were simply doing the absolute minimum required by law to get rid of us.

So far since the second repair, this unit has worked faultlessly. But it has only been a month or so since the last motor/compressor assembly was replaced.

And I’m not going to praise ARB for fixing this unit, even though it was out of warranty.

They should have swapped the entire unit out when the first motor/compressor assembly failed. I don’t blame ARB Wollongong here, they were excellent. It’s ARB head office I’m cranky with.

And as far as ARB Alice Springs are concerned, I wouldn’t trust them to change a tyre on a push bike.

Not a chance. If our ARB twin compressor is still running faultlessly 3 years from now, maybe I’ll change my mind.

ARB advertise the twin compressor as being suitable for running air tools. I don’t think so. Ours would have lasted about a week if we had used it to run air tools.

And one final gripe. I’ve been going to remove the twin compressor from its carry case and mount it permanently inside one of the storage cabinets on our truck. But until it proves to be reliable, there’s no way I’m doing that.

After all, it’s so much easier to use the portable carry case when we need to lug the entire unit into our nearest ARB store for more repairs…

Maybe ARB have fixed the defect in these compressors. Maybe we bought a lemon. Either way, it’s been a really disappointing experience.

We try to buy Australian and we try to buy quality. We want our gear to last a long time. I know the unit is most likely made in China, but I would have thought ARB’s design team might have been able to come up with something better than this.

Unfortunately our ARB twin compressor hasn’t been reliable and I simply can’t recommend it.

When it works as it should, the unit is brilliant. The question is though, will it keep working? Past experience has shown this may not be the case.

There is one positive though. The CKMTP12 Twin Portable is quite heavy and fits neatly inside the carry case. So if it fails again, it’ll make a good boat anchor…

Update: Go here for our 6 year review on the ARB Twin Compressor. Thankfully, the story gets better…

Note: We are not affiliated with ARB in any way. When we review a product, it is an honest reflection of our experiences with that product.