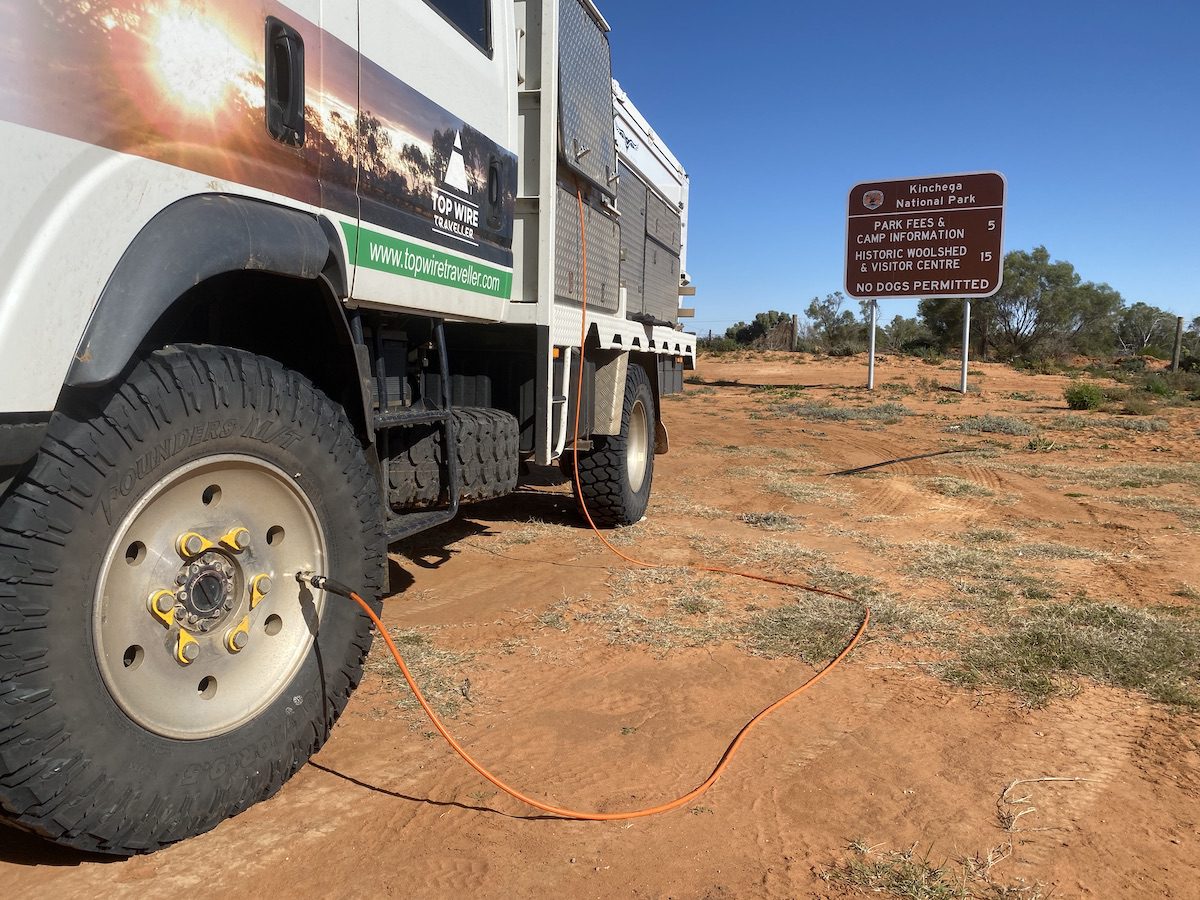 For the first 3 years of its life, our ARB twin air compressor gave us plenty of grief. First one dud motor, then a second dud motor… we were seriously considering throwing it in the bin.

However, it’s now six years since we first bought our CKMTP12 ARB Twin Compressor as a portable unit in a carry case.

And I have to say, it’s finally redeemed itself in the last three years.

Why A 12VDC Air Compressor For a 24VDC Truck?

In hindsight, we should have bought a 24VDC version – and an on-board unit. Our truck runs on 24VDC. But the logic was, at 12VDC we’d be able to run it off any vehicle… and off our 12VDC dual battery system.

And if it was portable, other people could use it if need be. But we’ve only ever used it for our own truck.

So about four years ago, I really wanted to mount it permanently in the truck. Dragging out the carry case and setting it up every time was a hassle. But since it was so unreliable, I wasn’t game to. The last thing I wanted to be doing was ripping it out when it inevitably broke down again.

Over the past three years, it hasn’t missed a beat. Credit where credit’s due…

So I finally decided to convert our ARB twin air compressor into a fixed unit. We’ll cover the conversion from portable carry case to fixed unit in detail another time. For now though, let’s see how it has performed since the last review three years ago.

From A Lemon To A Reliable Unit

Once both motors were replaced (go here for all the gory details on this saga), the ARB twin has been ultra-reliable. Finally… although you kind of expect this when you fork out a couple of grand for the “best”.

It’s taken a few years to regain my trust. But at least now I don’t hold my breath when I use it, wondering whether it will let us down yet again.

Everything has lasted, with the exception of ARB’s dodgy cabling. More on this soon.

The switchgear, quick-connect fitting and even the carry case have stood the test of time. The hoses, air chuck and air gun are top quality and are like new. We don’t use our compressor every day, however it gets regular use.

One standout deficiency with these units though, is the cabling and connectors.

For some reason, ARB have gone down the cheap and nasty path with their cables and connectors. Even the individual 40A fuses are cheap blade fuses. At least they’re a maxi-fuse (large fuses).

The problem is, the ARB twin air compressor draws around 56A (28A per motor). It takes just a couple of minutes for the cables to become too hot to touch.

When we disassembled the unit to install it permanently, we discovered several spots where the cable insulation had melted and a couple of blackened terminal connectors.

Each motor has a separate positive supply cable and individual fuse, which is sensible. However, it only has one undersized negative cable. Add in the pathetically undersized terminal connectors and it soon becomes obvious why the cables get so hot.

Three years ago, I would have said, “No way!” But after three years of reliable service, I’d maybe consider a 24VDC unit – maybe.

Why the hesitation? Because of the three years of trouble we had at the start. And because of the dodgy cabling.

I really don’t like those undersized cables and crappy terminal connectors ARB use. It’s a shame. The cabling lets down what is otherwise a well-built unit… once you get motors that don’t clap out of course.

Why ARB scrimp on one of the most important parts of the system is puzzling.

The good news? When this unit’s on song, it pumps out plenty of air and copes easily with the higher pressures needed to inflate light truck tyres.

We’re running what’s roughly the equivalent of 36” tyres on our truck. The ARB twin inflates them from 45 to 80psi (front) and 55 to 85psi (rear) in just under 2½ minutes per tyre. That’s pretty impressive.

There’s no doubt, the ARB twin air compressor and I have been through some serious strains on our relationship over the past six years.

It was brilliant for a year or so, then gave me hell for another two years. Finally, it seems to have redeemed itself over the past three years.

You might be thinking, “Six years, that’s forever. What’s the problem?” Well, yes and no.

ARB promote the twin compressor as a high-end unit – the best of the best. But it’s far from perfect, especially the cheap and nasty cabling.

And ARB promote this compressor as being suitable for running air tools. It has a 100% duty cycle and is supposedly designed to run for long periods. Using it once a week or less on average for 15 minutes at a time, shouldn’t tax it at all. It should last for many years.

Now we’ve mounted it permanently as an on-board compressor and re-wired it, maybe it will.