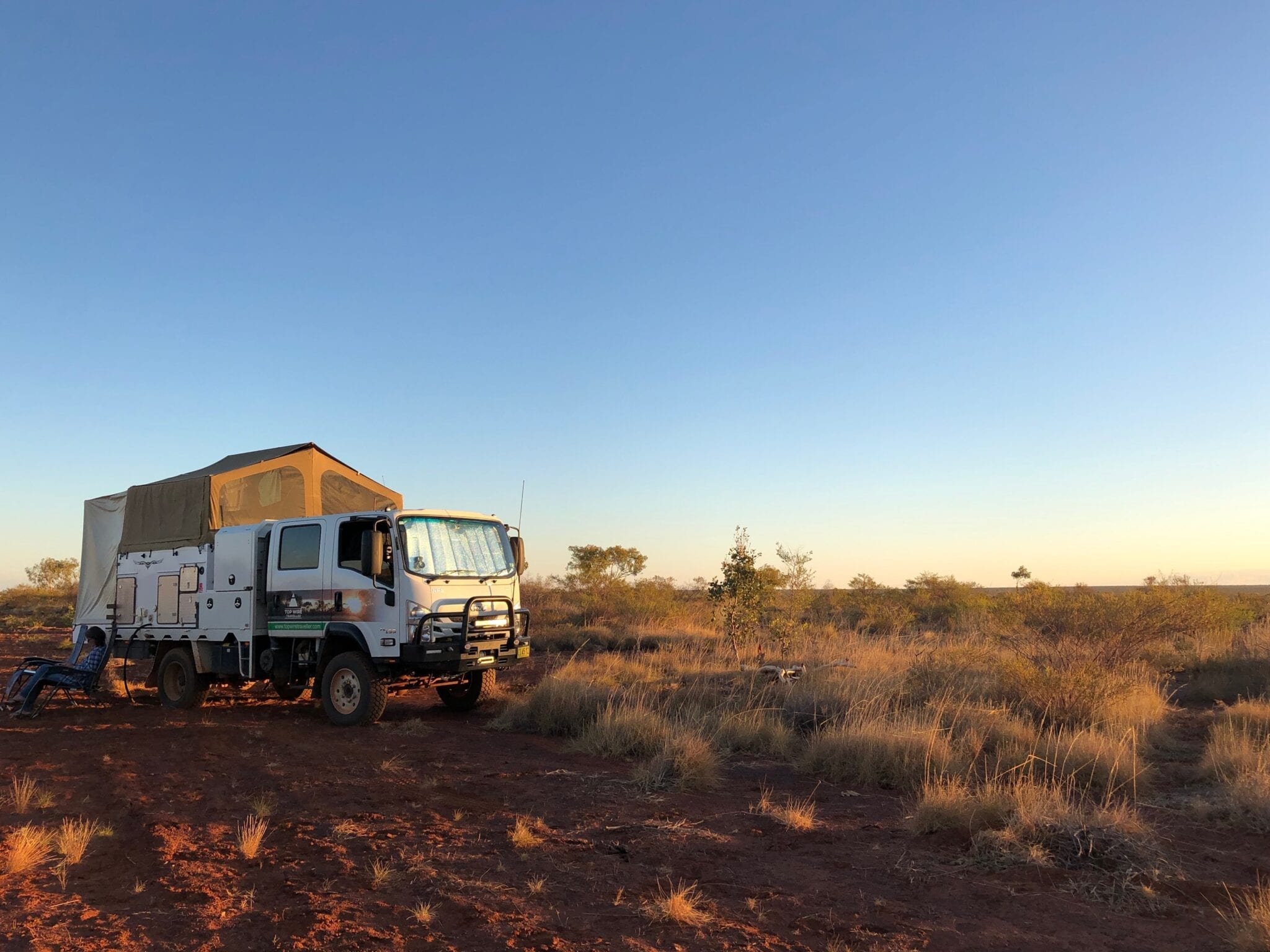 Lajamanu Road, NT – A Shortcut To The Top End

When driving north-west on the Tanami Road, you’ll see a sign for Lajamanu. It’s just past the Tanami Mine and easy to miss.

This is a must-do drive if you’re thinking of visiting Judbarra (Gregory) National Park… or if you’re simply looking for another route to Katherine or even the Kimberley.

Lajamanu is a small community about 230km pretty well directly north of the Tanami Road turnoff. The road had recently been graded, so was a welcome relief from the corrugated Tanami with its procession of high speed rock-chucking 4WDs.

Road conditions vary depending on when the grader’s been through. You’ll encounter hard-packed sand, clay and a few rocky sections. Watch out for bull dust holes, the occasional nasty dip and hard reefs of rock.

South of Lajamanu, the road is generally in better condition than the northern side. Slow down and use your commonsense.

You are permitted to camp within 50 metres off either side of the road.

You don’t need a permit to drive this road.

Both Lajamanu and Kalkarindji (further north) have fuel and basic food supplies.

After just a few kilometres, the country changes. You start passing through country covered in spinifex, low scrub and short white gums covering the dark red sand. Oh and zillions of termite mounds of course!

This is a good place to see the benefits of low intensity burning by the local Aboriginal people.

Spinifex covers the ground as far as the eye can see. In fact, we had a bit of trouble finding somewhere to camp for the night, as the undergrowth is quite thick. (You’re allowed to camp up to 50 metres off the road).

While the spinifex is manna from heaven for the termites, it also provides invaluable ground cover for all the little creatures that call the Tanami Desert home.

We found a spot to camp just off the road, a few kilometres north of Jiwaranpa Outstation. This was on a ridge, looking west across a vast wooded plain. The sunset from our perch was magnificent.

After a windy day, the sun set in an angry orange ball. But the real action started after the sun disappeared below the horizon. The western sky displayed every shade of orange imaginable for over an hour after sunset. Even the sky to the east was a dark bluey-grey colour.

And to top it off, the full moon burst over the horizon from the east. It was so bright, we could walk around without needing a headlamp!

The perfect end to a magnificent day.

Falling Off A Cliff

Next morning we packed up after being treated to an awesome sunrise. It was time to push north towards Lajamanu. We drove on through the wooded country, admiring the landscape in the early morning light.

After quite a while, the country dried out and became quite arid. The wind picked up and was blowing a gale. We were rueing our earlier decision not to stop for a mid-morning coffee in the more timbered country.

Just as we were about to pull up for a coffee on the windswept plain, one of those road signs that indicate a sharp bend appeared in front of us… the black and white ones warning you to back off quickly.

The road flicked sharp left then disappeared down an escarpment. In front of and below us were red rock ranges, dotted with white clumps of spinifex. What a sight!

We dropped down quickly into a protected spot. Perfect for a cuppa. As we took in the surroundings, we wondered at the significance of these hills and how many thousands of generations of Aboriginal people had stood there just like we were, marvelling at the ancient landscape.

Too soon we were back in the truck, driving across a wide plain as the escarpment opened out, away to our left and right.

We were back into the wooded country. The road narrowed and we were cruising along a sandy road with high banks on both sides. We love these roads, classic Red Centre touring at its best!

We swung east, heading directly for Lajamanu…. and directly into the howling easterly. The wind was whipping up sand and dust and throwing it down the road at us.

As we passed the “Welcome To Lajamanu” sign, the trees thickened considerably. We crossed a creek and rolled into Lajamanu, and noticed how protected it was. There was just a gentle breeze.

After the usual confusion of figuring out where the fuel was, we filled our tank at the busy shop. The people were friendly and the community was quite vibrant. The only downside was an arrogant whitefella from the Land Council who was throwing his weight around, demanding fuel. What an arrogant pig.

In the late 1940s and early 1950s, Yuendumu to the south-east was deemed to be overcrowded by the Native Affairs department. So they shipped two groups totalling over 550 Walpiri people to Lajamanu (then called Hooker Creek), against their will.

These people promptly walked back to Yuendumu TWICE. As the crow flies, you’re talking about a distance of about 600km across country that would kill you or me.

After being transported back to Lajamanu for the third time, people stayed and a community grew. But they were still strangers on this land… Walpiri people living on Gurindji country.

In the late 1970s, the Wave Hill mob (Gurindji people) had a solution. They gifted their dreaming and handed over the country around Lajamanu to the displaced Yuendumu mob.

The significance of this cannot be overstated.

Imagine a white mother giving her children to a childless couple, because the couple’s children had been forcibly taken from them. Then you might start to have some appreciation of what an extraordinary gesture it was.

It gave the Lajamanu (Walpiri) people a reason to live.

Leaving Lajamanu, the road deteriorated. This is obviously the main route in and out of the community.

The landscape constantly changed. The wooded vegetation reappeared then we were into drier country again. Without even realising, we had climbed onto another plateau.

As we swung around a sweeping left-hander, there was another incredible escarpment not ten metres from the inside of the bend. We pulled up here for lunch and gazed across the enormous plain below us.

This country is extraordinary. It changes so quickly and the escarpments are something to behold.

Home Of The Wave Hill Walkoff

Pretty soon we reached the Buntine Highway, a typical one lane tar road. Left is Kalkarindji and ultimately Halls Creek 410km further on. Right is Katherine via the Buntine.

This was named after Noel Buntine, a man who built a livestock transport empire on the back of the massive cattle stations in this region. Just 8km west of the turnoff, we crossed the Victoria River into Kalkarindji.

Just north of Kalkarindji is Daguragu on Wattie Creek. This became the epicentre for the famous Wave Hill Walkoff by Aboriginal stockman. At the time, Wave Hill was owned by the British corporation Vesteys.

The stockmen and their families camped at Wattie Creek (now Daguragu) for nine long years and refused to work for rations any longer. After all, this was Gurindji country.

It belonged to them, so why should they work for people who had taken their land by force and murdered many of their people?

Vincent Lingiari was their quietly spoken leader. Over time, the Wave Hill Walkoff transformed into a battle for land rights. This dispute ultimately led to land rights for Aboriginal people, symbolised by Gough Whitlam famously pouring dirt into Vincent Lingiari’s hand… he was giving back the soil.

A plaque sits at Daguragu commemorating this historic event.

Perhaps the best summary of this saga is found in Paul Kelly’s classic, “From Little Things Big Things Grow”.

This article gives an excellent explanation of why Kalkarindji grew to be the main community, rather than Daguragu. It’s a frustrating saga of political interference and politicians looking after their powerful mates.

We rolled through Kalkarindji and the dirt started just west of town. It was here we encountered the first of six triple stock roadtrains and bone-jarring corrugations.

As you leave town, the Buntine twists and turns up and over jump-up country. The corrugations only ease off once you’re up on the plateau. Until then, be prepared to lose some teeth!

75km past Kalkarindji, there’s a sign pointing off to the right. This is the south-western access into Judbarra National Park and the start of our 275km adventure on the Broadarrow, Wickham and Gibbie Tracks.

Another exciting adventure was about to begin!

Lajamanu is on Walpiri Country. Kalkarindji is on Gurindji Country.

2 thoughts on “Lajamanu Road, NT | A Shortcut To The Top End From Tanami Road”