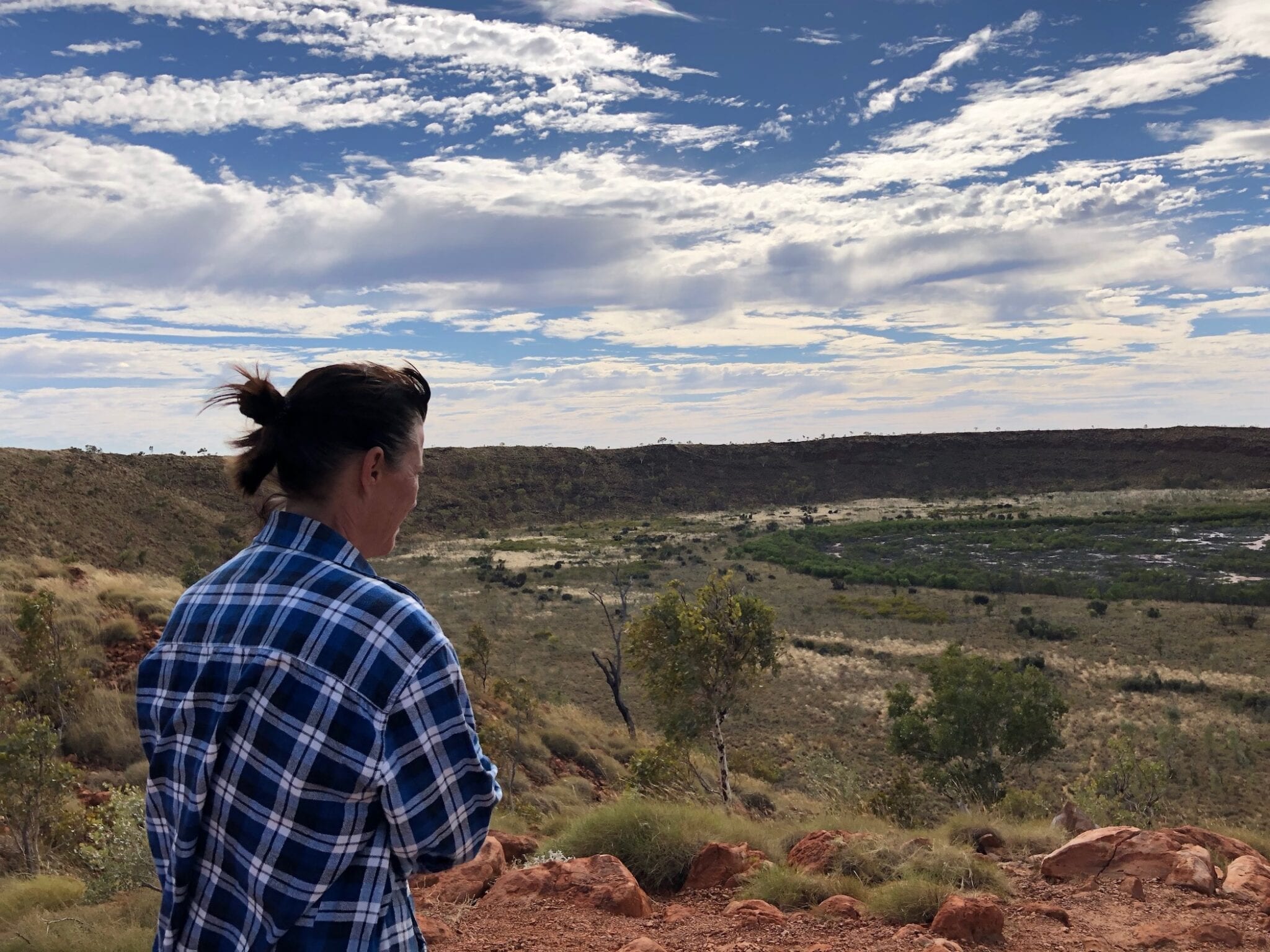 We visited Wolfe Creek Crater, near the western end of the Tanami Road. The real story is far better than the movie script!

Like many desert secrets, Wolfe Creek Meteorite Crater hid in plain view for many years. It wasn’t recognised as a meteorite crater until the late 1940s by surveyors, who were doing an aerial survey.

A couple of years later, a group of scientists ventured there and confirmed it was indeed an impact crater. Now a National Park, Wolfe Creek Crater stands out in the flat desert plains country.

Wolfe Creek Crater is remote. It sits about 150km South of Halls Creek in Western Australia and nearly 950km North-West of Alice Springs, just off the Tanami Road.

As you approach along the Tanami Road, a vague mountain range appears on the horizon. Turning off the Tanami, the road travels South-East for a while until it swings North. Wolfe Creek begins to take shape and you start to realise just how big this crater is.

Fortunately, Wolfe Creek Crater is fenced, to prevent stock from damaging the site.

And the name? It’s taken from nearby Wolfe Creek, named after Robert Wolfe who was a shopkeeper and prospector during the Halls Creek gold rush.

This is the scientific explanation.

About 300,000 years ago, an enormous meteorite weighing about 50,000 tonnes came blasting into the atmosphere at 15 kilometres per second. That’s pretty quick. It slammed into the ground at an angle and vaporised on impact.

It basically melted the rocks and dug a hole about 120 metres into the rock.

The rocks melted and folded and vaporised, and parts of the meteorite have been discovered up to four kilometres away. The crater walls show clear signs of being melted and twisted into all sorts of weird shapes.

Over time, the crater has filled with sand and the crater walls have eroded quite a bit. The crater is still about 850 metres across and the crater floor is now about 20 metres below the surrounding land.

When it rains, the water collects in the middle of the crater floor. When the water evaporates, it leaves behind the salts that have leached out of the surrounding soil. That’s why there’s a small salt pan in the crater. Salt-tolerant plants grow in the salt pan and paperbarks grow on the fringes of the salt pan, sucking up the precious sub-soil moisture.

And this is the explanation provided by the Jaru and Walmajarri people.

They knew Gandimalal (Wolfe Creek Crater) existed thousands of years before the surveyors “discovered” it in 1947.

The Walmajarri people say the rainbow snake Kariputa pushed up the ground to form the rim. Because Kariputa was from the coast South of Broome, he was covered in salt. That’s why the crater’s centre is salty. Kariputa is still there, under the crater.

The day we were there, a strong cold Southerly wind was howling across the desert. Once we’d made our way up the rocky path to the rim, we did well not to get blown back down the hill!

Tracks lead down into the crater via a narrow path. However, WA National Parks don’t permit this. Considering it’s a fragile environment, this is fair enough.

With the wind blowing a gale, Wolfe Creek Crater is just a little bit creepy. And not because we were having visions of Mick Taylor (John Jarratt) showing up and dismembering us. No, it’s just one of those places where the wind howls through the spinifex… somehow the place feels lonely.

Looking down into the crater, you’ll see a salt pan in the middle with a smattering of hardy salt-resistant plants. The rocks in the crater’s rim show obvious signs of having experienced a massive trauma. And if you look around, you’ll see rocks stones that have been melted and re-formed in another shape.

While Wolfe Creek Meteorite Crater was made famous by the movies, don’t let this be the sole reason for your visit. Take in the surroundings and imagine how this must have been at the moment of impact.

And imagine a giant rainbow serpent appearing out of the ground here and forming the crater. I love this image. Somehow, it just fits the landscape perfectly.