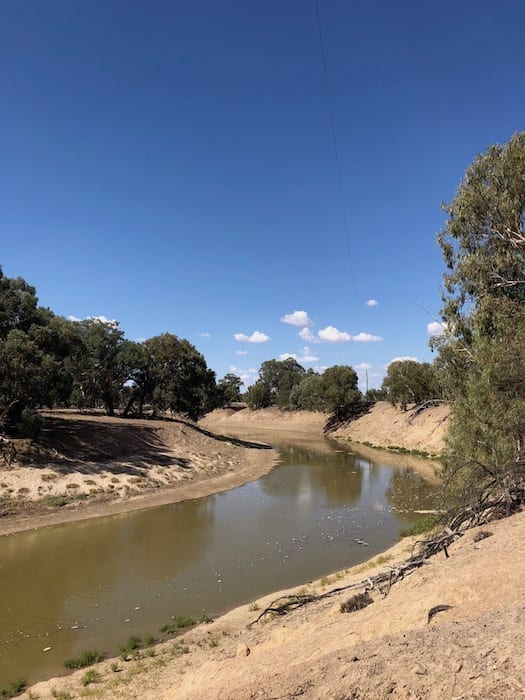 Big rains in Western Queensland during March, 2018 meant the Darling River was flowing again. Water was slowly making its way through the system.

We were on a mission. Find the flood front, and check out the river before and after the water came through.

Having seen photos of the flood front passing Louth, we made a plan to follow the Darling River upstream from just North of Wilcannia. We followed the East Tilpa Road North, checking the river wherever road and river met. This way, we hoped to see some “action”.

For those of you who have never been out to the Darling River, I really should explain what a “flood” means in these parts.

As you can see, the Murray-Darling catchment area is absolutely enormous. Heavy rain in Queensland eventually makes its way down the system. So you can have severe drought conditions in say Western New South Wales, yet the river may see a flood.

These were exactly the conditions we had. Heavy rains across Western Queensland in mid-March 2018 were making their way down the system.

And while the word flood might conjure images of raging torrents, this is not necessarily so. This particular “flood” was more a slow and consistent filling of the river. Think of it as giving the Darling River a good flush out.

In fact, around Louth the flood front was moving at roughly 10km per day. Not exactly your typical idea of a flood!

The Search Is On

Our adventure started around 75km North of Wilcannia. We ducked off the road and looked down over the bank.

The Darling “River” was nothing more than a stagnant pool of lime green slime. A billabong full of blue-green algae. While we were there, the landowner appeared on his motorbike. He was checking out the river, and checking what we were up to.

He owned a large property here and was desperate for some water. They rely on the river to water their stock and for all non-drinking water in their house. The week before they had decided to stop using the river water in the house, as it was simply too putrid. They had switched to their precious rainwater tanks instead.

This gentleman told us the water had passed Trilby Station and would take about a week to reach Tilpa. Now Tilpa has a weir upstream of the town, so he said they may not see any of the flow. If they did, it would be at least another week before they’d see anything.

So he predicted the water would take at least 2 weeks to travel about 160km.

In what has become a common theme on our travels along the Darling, the subjects of water allocations now being granted on low flows, the insane amount of water being used by irrigators upstream and the phrase “Cubby Station” were all discussed. More on this later.

More Of The Same

We left this unfortunate grazier and continued North. His personal perspective certainly gave us something to think about. The country was desperately dry. A flood event like this should give all those who rely on the Darling some hope. However, they know that most of the water will be pumped out to feed massive cotton crops before it reaches them.

These people are the meat in the sandwich between corrupt politics and corporate greed, and the basic need for water to survive.

We checked out the river in a few more places and found more of the same. We knew the Darling River has always cycled between strong flows and just chains of waterholes. However, every pool was a disgusting lime green slime, full of blue-green algae.

And that’s certainly not natural.

The blue-green algae is a result of nutrient-rich water… fertiliser, chemicals and manure.

To see the river in such a state is depressing. Natural flushes like this one simply don’t occur often enough now to keep the river healthy.

The Darling River is nothing more than a giant irrigation channel. The large corporations upstream don’t care whether the river flows downstream of them. They just want their water allocations.

And state and federal politicians don’t care either. They just want to keep their big corporation mates onside, so they can get a cushy consultancy job once the voters kick them out.

The Barkindji people of the river at Wilcannia protest and blockade the bridge over Easter to highlight the plight of the Darling River. They’ve been told not to use or even touch the water there. But who knows about it? No one cares. Out of sight, out of mind.

Wilcannia locals play a cricket match in the bed of the river to highlight their plight. Again, it’s a novelty for people to like and share on Facebook but then it’s quickly forgotten.

The system is broken. Meantime, the river dies a slow and horrible death.

Is it okay to suck the life out of the river and everyone downstream be damned? What do these people drink? What do livestock drink? And what about the river itself? The Barwon/Darling system is over 2,700km long. Do we just let the entire ecosystem die?

There has to be middle ground, some balance.

Environmental scientists with years of accumulated knowledge, give successive governments hard figures on minimum flows needed to keep the river system healthy. Politicians take these figures and twist them to suit their agenda, until the figures are meaningless. Powerful lobby groups attack the environmental scientists and discredit their findings. The outcome is an unsustainable mess.

To me, the fact that people in Wilcannia can’t even go near the water is a clear sign that something is terribly wrong.

And then we saw it. We pulled in off the road and there it was. The river was flowing!

What an incredible sight. We were at Milpra River Well, about 30km South of Louth. Clearly we were just above the flood front. A huge pool had filled and the river was flowing quite strongly.

Yes, the river was still green. But it was certainly diluted. What did stand out was the disgusting gunk being pushed down the river. Bubbly lumps of brown, green and white slime. God only knows what toxic cocktail was in that water.

This is exactly what the river needs… a good flush out. A regular flush out.

It’s hard to describe how excited and relieved we felt. We have no connection to the Darling River, other than a concern for its health and a love of the feeling it engenders when you camp on its banks.

Yet we knew we were witnessing something special, something not many people get to see.

Despite all the odds being stacked against it, the Darling River was refusing to die. We were there, watching this grand old lady picking herself up off the floor one more time. But for how much longer?

Moving on to Louth, we camped at our favourite spot on the Western side of the river. The Darling had a green tinge but was flowing quite strongly. It was hard to believe that only days before, the vista before us was a slimy green chains of ponds.

In fact, we launched our kayak and rowed upstream. Rowing up the river in the early morning is one of the most relaxing experiences you’ll ever have. You enter another world, dominated by water birds and grand old river red gums. The gums are like guardians of the river, gazing down from the high banks and ensuring all is well.

The locals at Louth told us the flood waters from the Warrego River had not reached the Darling yet. This meets the Darling North of Tilpa, at Toorale National Park. And a secondary flow was expected down the Darling as well.

So this poor old river has some chance of getting a good flush out.

We moved on to Toorale National Park and had a look at the river there. It was completely different to what we saw at Louth. We suspect the secondary flow had already gone through, as the water was that typical muddy white colour.

In other words, the river looked healthy. What a relief.

Time will tell whether this flood reaches the Murray River. Given what we saw, the Darling River system desperately needs a good flush out. We can only hope.

The Darling River is on Barkandji Country.

2 thoughts on “Chasing The Flood Front Along The Darling River, NSW”