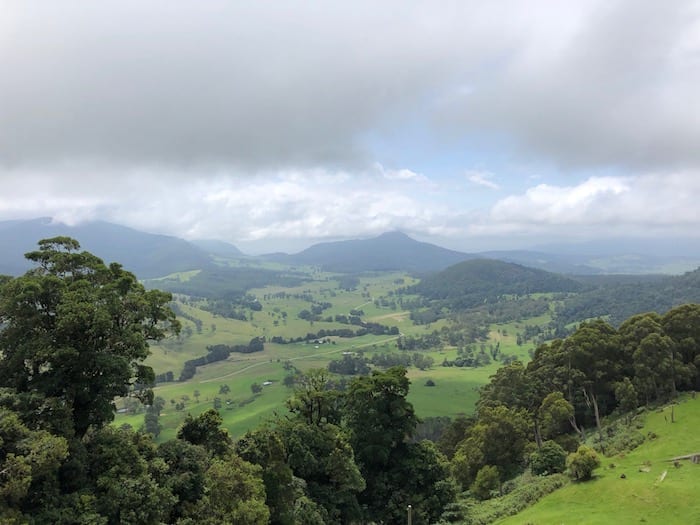 Taking A “Shortcut” Through The Border Ranges

If you’re looking for rainforest, waterfalls, twisty mountain roads and spectacular scenery, then the Border Ranges will be the perfect destination for you. Deep volcanic soil combined with high rainfall means the ranges are highly fertile and rainforest flourishes here.

These ranges were formed about 25 million years ago by a volcano. The soil is dark black basalt, metres deep. Such fertile country.

So where are the Border Ranges? They are part of the Great Dividing Range, running along the NSW/QLD border. Access is possible from all directions.

We started at Warwick in Queensland and drove East, then vaguely South then East to Bonalbo in New South Wales.

We’ll split the trip into sections. You can choose what you’d like to see and make your own plans accordingly.

Driving East from Warwick, the country quickly changes to fertile valley country, bordered by high mountain ranges. Killarney sits at the Eastern end of this valley, surrounded by lush sub-tropical rainforest in the surrounding mountains.

Take the Falls Road to the East. Just before you starting climbing, you can call into Browns Falls. And then you start to climb a mountain range. Daggs Falls is just off the road and the viewing platform affords a perfect view of the falls below you.

After climbing and twisting your way up the mountain, you’ll reach Queen Mary Falls.

This has a large grassy picnic area, with a caravan park across the road. You can take a couple of walks here, one of which takes you down to the base of the falls. This walk is fairly easy with some steps.

The view from the bottom of the falls looking up is excellent. You wander through thick rainforest and huge trees. We had a shower of rain on the walk, bringing to life the rich and varied smells of the rainforest. We highly recommend this walk.

Moving on, we followed a narrow windy back road. This road hugs the border, just metres into Queensland. Just off to your right is New South Wales.

We encountered a long steep descent down the side of a sheer escarpment. Several warning signs before the descent warned that no trucks, buses, caravans or trailers were allowed. This was a little alarmist, the road really wasn’t that bad. Although I wouldn’t tow a heavy trailer or caravan down there. The road is narrow and very steep in places.

So we basically spent the morning driving through rainforests, up and down mountains and along beautiful valleys. Mist was hanging on the mountains, indicating rain was on its way.

Eventually we turned right and followed a dirt road to the top of a ridge and into New South Wales. Once over the top, this road dropped into yet another spectacular valley. We twisted and wound our way up hill and down dale, eventually reaching Tooloom Falls near Urbenville.

Tooloom Falls is in a tiny National Park, called Bandhgan Aboriginal Area. This area was handed back to the Aboriginal people in 2007. Dooloomi is a site of special signficance to the Githabul people. Interpretive signage explains how the Clarence River was formed, with Tooloom Falls having a significant role in the Dreaming story.

The falls were flowing strongly due to recent rain. An old concrete causeway runs across the top, with a gap in the middle. This used to have a short bridge which was washed away and hasn’t been replaced.

This is probably a good thing. Across the river is a State Forest, a mecca for dirt bike riders. So the campground on the Northern side is no longer a through road, keeping the area peaceful and avoiding clouds of dust from passing traffic.

The campground has a drop toilet and plenty of shady sites. The roar of the falls is a constant companion. Dooloomi is a popular stopping point for grey nomads and camping is free.

Being a Saturday, the campground filled and there were lots of day visitors. Upstream of the falls is an ideal place for launching a kayak and exploring further up the river.

We had a swim in the large pool below the falls. While the water was quite brown from the recent rains, it was cool and extremely refreshing. We saw a large brown snake skin and were glad we didn’t encounter its former owner!

That evening, we were treated to a spectacular light show from a large storm cell to the West.

The video below will give you an idea of the road conditions and the landscape. This is a good dirt road, winding through the mountains. The descent into Paddys Flat was quite steep and windy, but nothing challenging. Just take it slowly and you’ll be fine.

The Clarence River runs through Paddys Flat. You’ll find plenty of places to camp along the river. Across the river is a sheer granite cliff face, providing a perfect backdrop.

The road crosses the Clarence over a ricketty wooden bridge. Once over the river, keep an eye out for tank traps. The river has carved a gorge here. This area was deemed a suitable defensive position in World War II, in case of invasion by the Japanese. Large concrete pyramid-shaped tank traps remain, once forming an impenetrable defensive line across the gorge.

Climbing out of Paddys Flat, more mountainous roads lead you into Pretty Gully. This really should be called Absolutely Gorgeous Gully! The road winds through a pocket of thick rainforest and is delightful.

Further on, we turned off this road to the left. We planned to follow it through to Tabulum. However, we soon encountered a really dodgy bridge with a 10 tonne load limit. After walking across the bridge and having some sections of the deck crumble under my feet, we decided to turn back.

We soon reached the Bruxner Highway. Another ancient wooden bridge over the Clarence River and we were in Tabulum. Turning left, a tarred back road takes you through to Bonalbo. This follows yet another magnificent valley, winding through fertile farming country.

Bonalbo soon appeared. This is an old timber town and sits on the edge of Peacock Creek. This looks like a sleepy town with a strong community.

The campground is on the Southern edge of town, nestled under huge trees with a carpet of green grass. You text a number and one of the locals appears to take your fees and give you a key to the toilets. The campground has a dump point, water and power.

The Border Ranges has something for everyone. We just touched on the places you can go to. You could easily spend several weeks in this area, wandering from one campsite to the next.

If rainforests and waterfalls are your thing, you’ll love the Border Ranges.