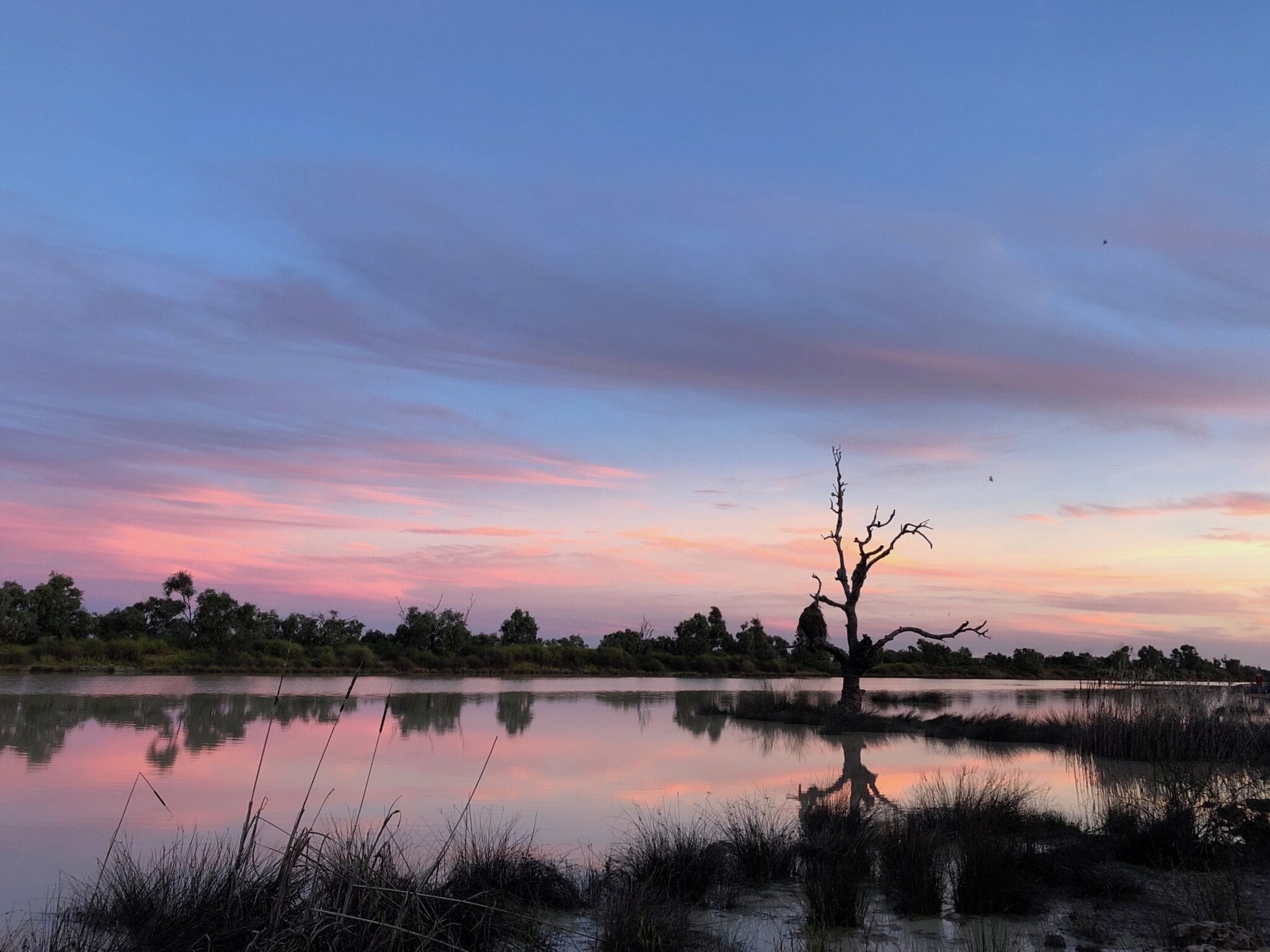 Birdsville is the “true” outback in the minds of many travellers. Tucked in the far south-west corner of Queensland, Birdsville sits on the edge of the Simpson Desert and at the northern end of the Birdsville Track.

It’s a popular destination for tourists, travellers, and adventurers. Birdsville’s famous for the annual Birdsville Cup horse races and the Big Red Bash… the world’s most remote outdoor concert.

And getting there is part of the fun.

After all, Birdsville’s the first town you’ll encounter after a Simpson Desert crossing… or at the end of your 500+km journey up the Birdsville Track.

The nearest major town is Mount Isa, 700km to the North. The closest town to the east is Windorah, 420km away on a mostly dirt road. This road is often rough and badly corrugated. And Brisbane? Well, it’s nearly 1,600km away.

As we mentioned earlier, Birdsville’s also home to the Birdsville Races and the Big Red Bash.

The Ebb and Flow of Tourism

Twice a year, the population swells from around 150 to over 10,000. In between the races and the Bash, travellers are always coming and going. But the town is set up for this massive influx of tourists. This town handles the big crowds effortlessly… it’s pretty impressive to witness the Birdsville community in action.

So it’s fair to say, Birdsville is used to the ebb and flow of tourism.

Somehow, this sleepy outback town springs to life and manages to feed, water, and accommodate all these people.

We’ve stayed at Birdsville several times over the years both during the quiet times and during the mayhem of the Big Red Bash. It’s a good place, one of those towns that quickly grows on you.

Birdsville, Busy Then Not!

The town was chaotic when we rolled in prior to volunteering at the Big Red Bash. Thousands of people were milling around the town. And multiple lines of vehicles waited for fuel, stretching back 50 metres or more.

The line up to the mechanic’s workshop grew and grew. Bonnets up, shredded tyres, broken caravans – the workshop was a popular place! Yes, tempers frayed occasionally. But all things considered, most people behaved themselves.

Then once the Bash was over, 10,000+ people made a mad dash back home again. Why they didn’t wait a day or two for the traffic to die down I’ll never know. Anyway, it suited us… we stayed on for a week and enjoyed the peace and quiet.

Birdsville seemed to settle back into a rhythm. It kind of stood up, shook itself, then settled back down again.

While they no doubt love the boost to the town’s economy, I’m sure the locals appreciate the break between the Bash and the Birdsville Races. No doubt about it, tourism keeps the town alive. Fuel, food, vehicle repairs, accommodation… they’re in great demand during busy times.

A case in point – the legendary Birdsville Bakery was busy all day, every day. Endless lines of hungry tourists were keen to sample their camel pies and get a shot of caffeine.

Birdsville Hotel was flat out every night and served reasonably priced, delicious meals. It’s good to see the owners are smart enough to avoid the temptation of price gouging during busy times.

A Special Spot On Birdsville Lagoon

We’ve stayed at Birdsville Caravan Park many times now. Our favourite spot is camping right on the edge of Birdsville Lagoon, a branch of the Diamantina River.

The amenities at the van park are excellent, with individual shower/toilet cubicles. It’s good to be spoilt a little!

Back to our special campsite. We could have been in the middle of nowhere, parked down out of the way in the south-west end of the park. As we stepped out of our camper, we were treated to an uninterrupted view of the lagoon. And the sunrises were unbelievable!

One year when we were there, the Diamantina had recently flooded after record rains in western Queensland earlier in the year. The flood rubbish in the trees was higher than the top of our truck! So Birdsville would have been a tiny island in a vast ocean.

The pelicans were enjoying the extra water. They paddled to and fro in groups, enormous beaks and necks disappearing under the surface as they filled their bellies with fresh fish. Highly entertaining for us casual observers from the shoreline.

The Heartbeat of The Town

Sometimes the best time to visit places like Birdsville is right at the beginning or end of the season. Late September is quiet, with most people deterred by the heat.

But it’s at these times when you see Birdsville in the best light… virtually no tourists and just the locals going about their business.

This time, we were camped in a powered site opposite the roadhouse. After a trip up Arrabury Road, we needed to spend a few days getting organised for our next adventure down the Birdsville Track.

Even during the off-season, the mechanic’s workshop is a popular place. Every day, locals and the odd tourist would wander in. Generally, they had a flat tyre or blowout.

Unfortunately, we did encounter two “interesting” tourists in the roadhouse. They had a flat tyre in their (high-end, luxury and completely unsuited for dirt road travels) 4WD Lexus.

The lady behind the counter said the mechanic was on a call-out and wouldn’t be back until late afternoon. She said if they paid for the repairs now, the mechanic would fix it that afternoon then leave it outside the door. That way, they could pick it up early in the morning and get on the road.

But the “lady” who was with the 4WD refused to pay until the job was done. She wasn’t happy and was quite rude. I’m sure she expected a tyre-repairer to magically appear out of thin air for her. Some people just don’t get it…

The other thing which surprised us was how many times the mechanic was called out for a breakdown. He’d jump in his Landcruiser at least once a day and disappear down one road or the other, often not returning until late afternoon.

And this was the quiet season!

In a way, the roadhouse is the heartbeat of the town. It’s a good indicator of how quiet or busy Birdsville is at any given time.

Birdville’s one of those places which conjures up images of deserts, red sand dunes, dust, and vast horizons. For others, Birdsville means horse races, endless dust, burrs, and a filthy hangover in the heat… or their first sight of Big Red as they roll into the Big Red Bash.

But we like Birdsville best when it’s quiet. Locals have time for a yarn. Everyone’s pretty chilled and laid back.

It’s times like these when you get to have a yarn to a pilot, a station hand, a local business owner, an old bloke who props up the bar of an afternoon. You get to discover how they live, and the challenges they face living in such a remote location.

These are the encounters we enjoy the most. These are when you discover the “real” Birdsville.

If you haven’t been to Birdsville (or even if you have), get out there and soak in the atmosphere. It’s well worth the effort.

If you want to find out more about Birdsville and surrounds, a good place to start is with Even McHugh’s entertaining yarn, “Birdsville, My year in the back of beyond”. Evan and his wife spent a year in Birdsville, getting to know the locals, the First Nations culture, and immersing themselves in the realities of living in a remote outback town.

SBS created an enthralling documentary called, “Birdsville Or Bust”. This captures the character of Birdsville and how it balloons out to fit a crazy influx of visitors twice a year, then contracts back to a dozy outback town.

Birdsville is on Yarluyandi Country.

Looking for more destinations and road trips in and around Birdsville? Then go here.