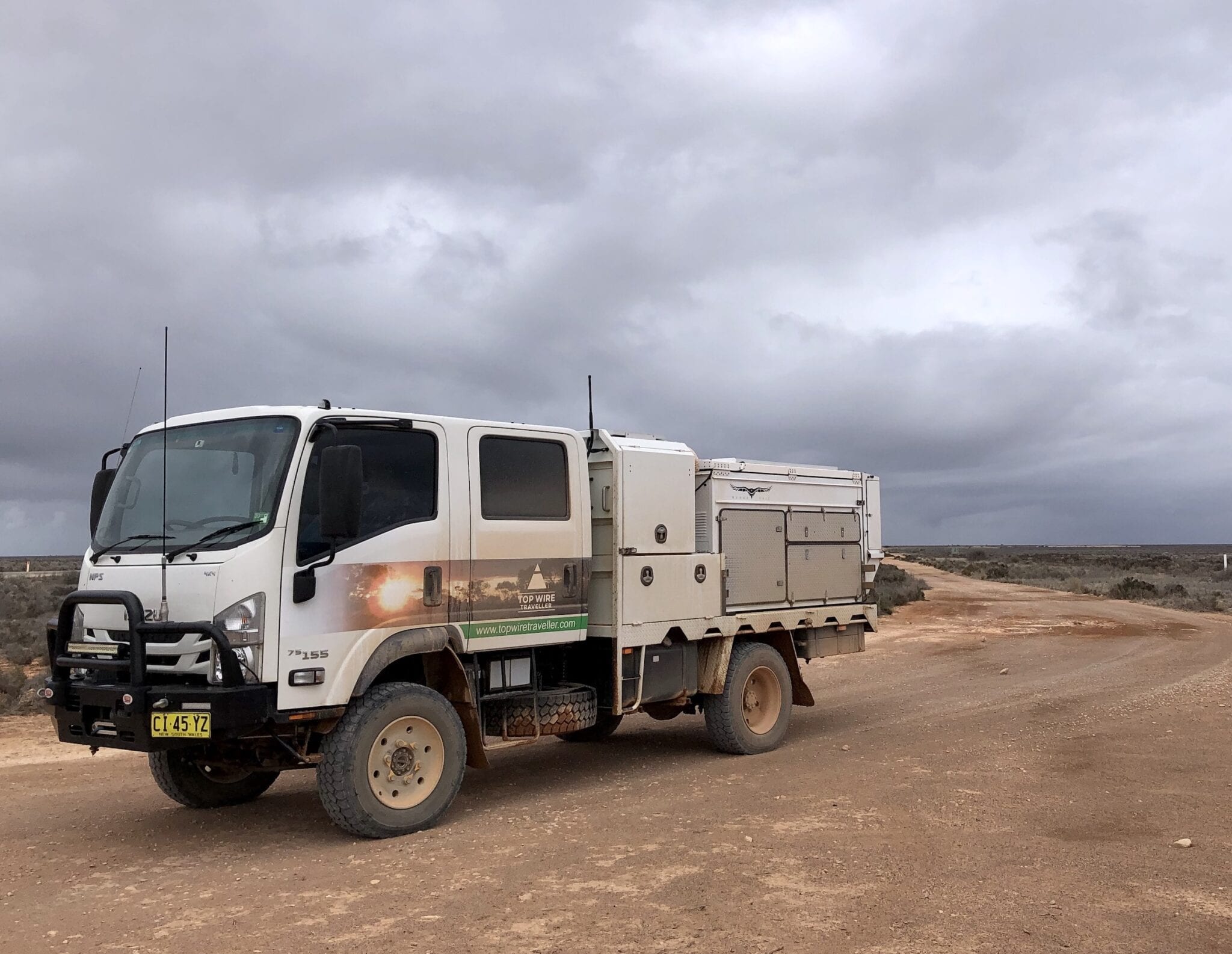 So, what’s happened in the last 12 months? Has our NPS been reliable and lived up to expectations?

The last 12 months have been pretty badly disrupted. In that time, we’ve travelled less than 20,000km. I know, not good enough…

The odometer is at 128,000km after 4 years. Hardly big kays when you average it out over 4 years!

We’ve had a few unforeseen breaks over the last year… a long 4-month break when we were selling our house and downsizing, a 5 week break when we were caretaking at Wild Deserts and then of course, lockdown due to the pandemic for over 3 months.

In effect, we haven’t travelled much at all this past year. Although, we did manage to fit in a few awesome trips…

“Where Has the Truck Been in The Last Year?”

So, we’ve still managed to get around!

And the truck’s had its fair share of corrugations and rough dirt roads.

No, nothing at all.

Just two new tyres. We replaced them early, at just on 60,000km. Why? Well, we were heading to NSW Corner Country in late December to caretake at Wild Deserts all of January.

The tyres were marginal, although we could easily have squeezed another 5,000km out of them.

I decided we were better safe than sorry, and replaced the two spares.

We didn’t need them of course! Months later when I rotated the tyres, the two new spares ended up on the front.

It turns out the tyre dealer used internal balance beads, which are worse than useless on a truck tyre. Not surprisingly, the tyres wobble and bounce until we get up enough speed and everything balances itself.

So if you’re ever wondering whether to try balance beads… don’t!

And when you get new tyres fitted, make sure to specify you want them balanced with external weights.

We’re still seeing strange wear patterns on the front right (before I rotated the tyres). After lots of investigation and a long yarn with Steve from Toyo Tyres, it seems like these small trucks are notorious for unusual wear patterns.

Another thing that might have contributed… these tyres have done more long-distance bitumen driving than we’d normally do.

The best way to keep tyre wear under control? Rotate them every 10,000km. Steve from Toyo also said to get a wheel alignment, however I haven’t got around to it yet. Find out more details about tyre pressures for light trucks here.

We recently bought a couple of Airhawk truck seat cushions. (Note: We’re not affiliated with Airhawk in any way). I keep dreaming about fitting new suspension seats in the front for driver and passenger. Realistically though, it’ll probably never happen.

One reason is the seat height. Suspension seats add height to the seat base and we’re both pretty short. So I don’t really want our legs swinging freely like two toddlers on a lounge chair!

Honestly, we’re not too worried about the seats. Yes they could be better, but I suppose we’re used to them now.

We’ll give these seat cushions a try. They have a series of air pockets which you inflate with a hand pump to suit your weight. I’ll let you know how they go.

“What Other Mods Are You Planning to Do?”

I’m having a few crazy thoughts about ripping everything out of the back seat area and starting again.

This all started from us trying to figure out a way to carry two mountain bikes. We can’t have a rear carrier, as our rear overhang would then be more than 60% of the wheelbase… the RMS would have a field-day!

And I don’t want them on the roof. The truck’s tall enough already.

This of course would mean building a whole new storage system and relocating the dual battery system. Hmmm…

Just like the suspension seats, I’ll probably never get around to it. But who knows? It’s worth considering.

I said earlier we spent January slowly cooking from the inside out, while caretaking at Wild Deserts near Cameron Corner. A “cool” day was mid-30s, a hot day was 48°C.

We left there in early February and explored Eyre Peninsula in South Australia. Temperatures were still crazy-hot. When we arrived at Ceduna, I noticed what looked like large amounts of power steering fluid splashed all over everything.

I checked the reservoir (behind and above the front wheel), which was still full. It had indeed been leaking, but the reservoir wasn’t cracked or damaged and all hose clamps were tight.

Oil leaks always look worse than they are… the smallest amount of oil has a knack for spreading out over every available surface. The volume of fluid that had actually escaped was probably minimal.

After a few phone calls and a visit to a local diesel mechanic, we decided all was well and headed across the Nullarbor.

The truck was booked in for a service at Albany Isuzu anyway, so they checked the power steering system, flushed it and filled it with new fluid.

We never found the cause. All I can think is maybe the reservoir was over-full and the extremely hot days meant the fluid expanded enough to pop the reservoir’s filler cap slightly.

Or the filler cap might not have been on properly. We’ll never know.

None of the Isuzu service people I spoke to had seen this before and it hasn’t happened again. The power steering is working perfectly and there aren’t any strange noises coming from the pump.

“Would You Buy Another One?”

Definitely! An Isuzu 4×4 truck is an ideal option for a tourer, overlander, truck camper, expedition vehicle… or whatever you want to call them!

If I was to start over? I’d seriously consider a single cab with a large walk-in box or pod behind the cab, instead of the dual cab.

The dual cab is great for extra space where you can securely store your gear. However, there’s a lot to be said for the convenience of being able to tilt the cab.

There’s a few things hiding under the floor of that dual cab (like the power steering pump and an exhaust brake switch on top of the gearbox for example) that are almost impossible to get to.

Yes, the dual cab can be tilted for major repairs. But it would be good to have that access on hand all the time.

Other than that, our Isuzu NPS has proven why they are so popular as mine and emergency service vehicles. They’re tough and reliable.

We’ll be hanging onto ours for a while yet!

15 thoughts on “Review: Isuzu 4×4 Truck from All Terrain Warriors, Year 4”