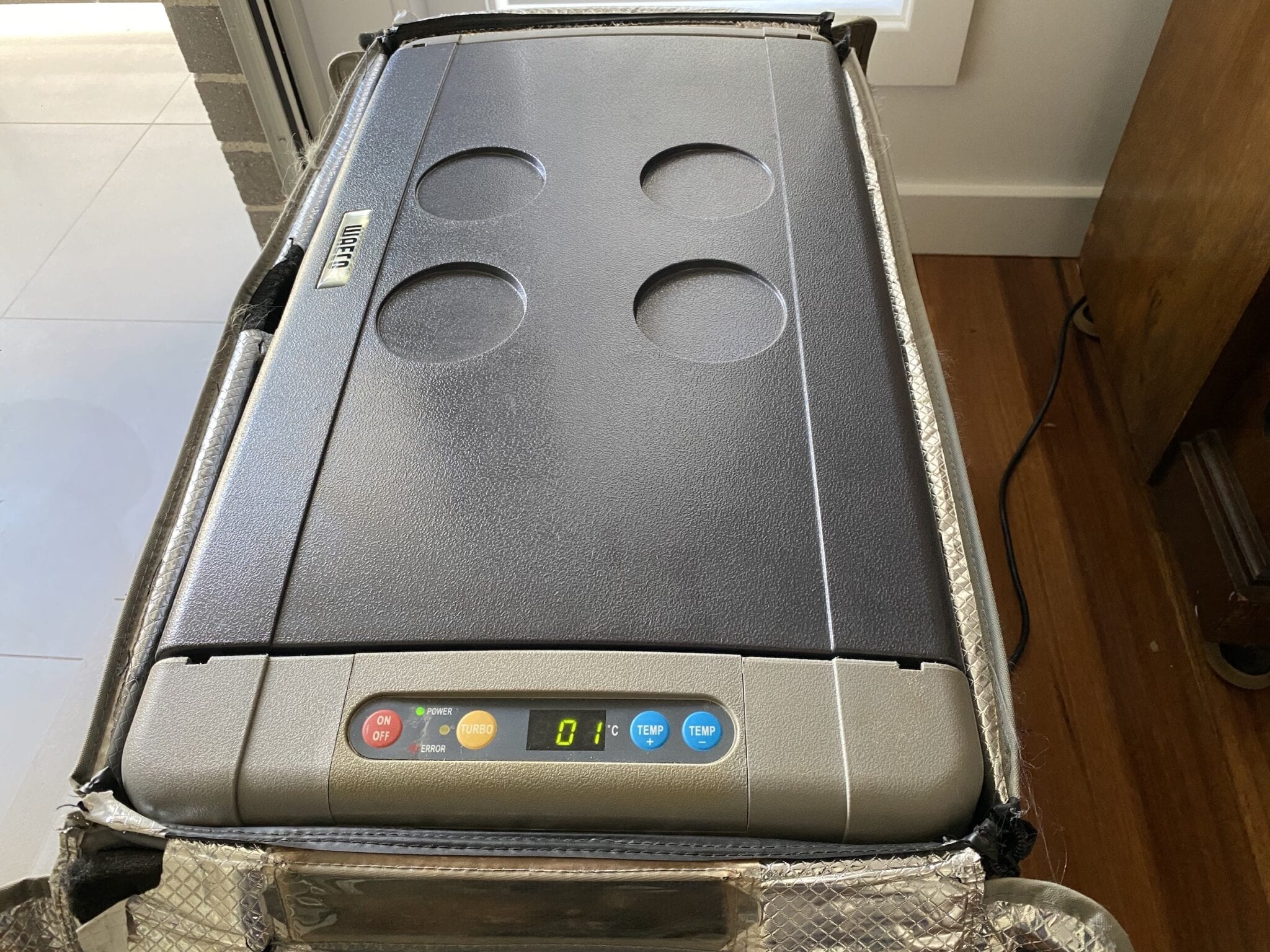 How do you change a Waeco thermistor in the CF range of fridges? And how do you know when the thermistor has failed?

We’ll lead you through the process.

First though, we’ll explain what a thermistor is and why your fridge has one.

What is a Thermistor?

A thermistor is a thermal resistor. In simple terms, its resistance changes as temperature changes. The electronics in the fridge read the resistance and convert that to a known temperature.

So what you see on the temperature readout, is simply what temperature the thermistor is detecting at the bottom of your fridge.

How To Decide If The Thermistor Is Faulty

The CF range of Waeco fridges have a known fault. The thermistor often fails after several years.

If you have a temperature problem with your Waeco fridge, then there’s a good chance the thermistor has died.

Where does the moisture come from?

It’s simply condensation between the outside of the compartment and the thick layer of foam insulation. And because the thermistor is on the bottom of the fridge, it tends to sit in damp conditions for long periods of time.

Eventually moisture makes its way into the internals of the thermistor, causing it to fail.

Now this takes a while to happen. In our case, the fridge was over 14 years old. (See a long-term review of our Waeco CF-50 fridge here).

For example, at first our CF-50 fridge consistently displayed 00 no matter what the actual temperature was.

If we then set the fridge below 0°C, it would pull the temperature down to the setpoint and operate correctly. After a while though, the temperature display was showing random numbers… 53, 28 and eventually 80.

80 is the maximum temperature the fridge will display, so is a good indication the thermistor has shorted out internally. I’ll explain this further below.

When this happens, the fridge runs constantly. It’s trying to bring the temperature down to the setpoint. The result? Everything in the fridge freezes solid!

I was confident the thermistor had failed because of how the fridge was behaving.

However if you want to know for certain, then this how you test it…

How to Test a Waeco Thermistor

Waeco CF fridges use a 10k ohm thermistor. Resistance decreases as temperature rises. So if the internals of the thermistor have shorted out, there will be zero (or nearly zero) resistance.

And if the resistance is zero, then the fridge controller will think the fridge temperature is at or above 80°C.

That’s why when you see 80 on the fridge’s temperature readout, you can pretty well guarantee the thermistor has died. Make sense?

If you want to test your thermistor, set a multimeter to 20k (20k ohms) unplug the cable from the circuit board and touch the probes onto the metal terminal tabs.

In the photo below, it shows me testing the thermistor after I removed it. This is because I forgot to take a photo while it was still installed… whoops!

You’ll notice the reading on the multimeter is zero ohms. This means it has short circuited internally, so it has basically no resistance. If you get a reading like this, then your thermistor is definitely dead.

One thing to be aware of. I tested the thermistor again about a week after I had removed it, as shown below.

It had a resistance of about 3.3k ohms, so it was working again to some degree. I expect this is because the thermistor had a chance to dry out.

If you only use your fridge occasionally and it intermittently shows a fault, this could be why. The thermistor probably has a chance to dry out between uses, so will work for a while before playing up again.

How to Change a Waeco Thermistor

I could write a long and detailed step-by-step instruction manual on how to change the thermistor. Or I could just show you a video instead…

A few things to note from this video:

The Waeco thermistor in the CF range of fridges is a well-known weak point. Given ours is over 14 years old, I’m not too worried about it though.

Changing the thermistor is a bit of a mission and probably more difficult than it should be. However, these fridges are like most things now… they’re not designed to be repaired.

But with some patience and a bit of thought, you should be able to replace the thermistor easily enough.

This fridge has given us many years of faultless service. If I had to buy a new fridge, I wouldn’t hesitate to buy another Waeco (or Dometic as they’re now called).

And with the thermistor replaced, there’s no reason why our fridge won’t continue to run for many more years.

Go here to see the Dometic range of fridge/freezers for camping and 4WDs.

2 thoughts on “How To Change A Waeco Thermistor, CF Range of Fridges”