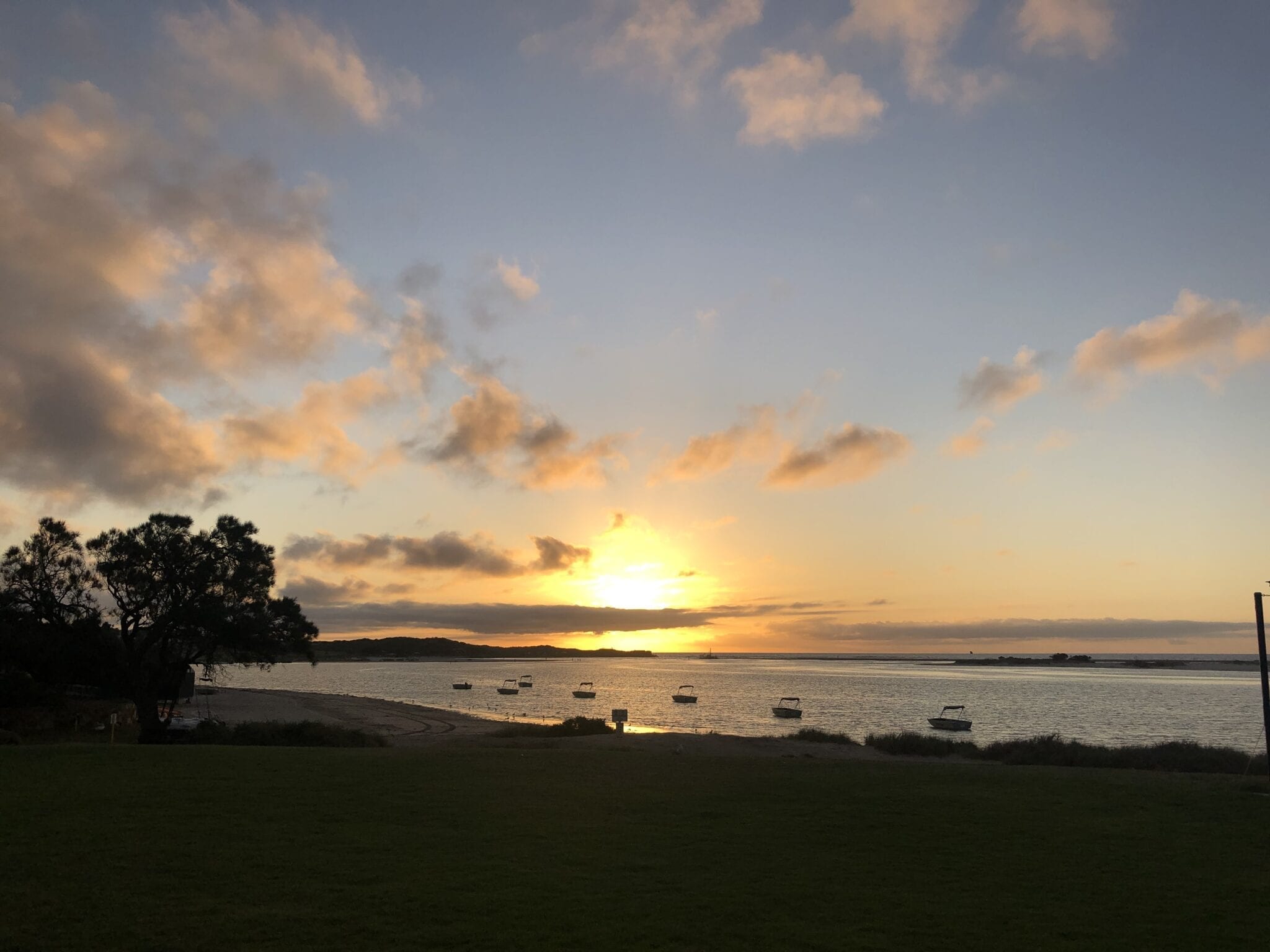 If you’re looking for a good dose of spectacular scenery, somewhere to swim and a great fishing spot, Kalbarri will tick all the boxes for you.

If you’re there in the off-season, Kalbarri is a sleepy little village and you’ll pretty much have the place to yourself. Peak season and school holidays are a different story though. This is a popular tourist destination and the town bulges at the seams.

Kalbarri sits on the coast, at the mouth of the Murchison River. It’s about 590km north of Perth, 150km north of Geraldton and about 400km south of Monkey Mia.

Coming from the south, you’ll pass Hutt Lagoon, a salt water lake with the most incredible shades of pink, purple and blue. The colours are caused by algae growing on the surface.

And coming in from the north, you’ll get a panoramic view of the town and coastline as you start to descend towards Kalbarri.

Bracing for the Wind

Pretty well everyone had warned us that Kalbarri would be extremely windy, so we braced ourselves for a really windy stay on an exposed site.

What a pleasant surprise we were in for!

Kalbarri is on the south bank of the Murchison River where it runs out to the ocean and is quite protected. Yes it was blowing a gale, however the site at the Murchison River Caravan Park was really protected and shady. Even better, we were less than 100m from the river’s edge which is more like a bay – warm water and sandy beach.

And there were palm trees!! We felt like we’d found paradise after the windy, exposed scrubby country on the Brand Highway between Perth and Geraldton.

What to See Around Kalbarri

You can use Kalbarri as a base and explore from there. Here’s just a few things you might consider checking out.

If you wanted a dose of weirdness, then Hutt River Province was the place to go. Unfortunately, the gates closed in January, 2020. Then in August, they announced the Province was to be absorbed back into the Australian Commonwealth.

They seceded from Australia in 1970, ably governed by Prince Leonard and Princess Shirley.

Both have now passed away and Prince Graeme became the fearless leader. Their (ancient) website is worth a look. It’s filled with all sorts of weird and wonderful proclamations . It seems knighthoods were all the rage at Hutt River Province!

We called in several years ago when Prince Leonard and Princess Shirley were still alive. We couldn’t quite decide whether they were serious or whether the joke’s on the visitors.

They were either deadly serious or it was the most elaborate tax-avoidance scheme ever conceived! Good luck to them I say… the world would be boring without people like these.

Unfortunately, it seems the Australian Taxation Office have finally won a long-running battle. In 2017, the Province lost a court case and were ordered to pay $3 million in back taxes.

With the death of Prince Leonard, it seems the determination to fight has disappeared from Hutt River Province and the family has decided to move on.

A quirky piece of Australian history!

The coastline is extremely rugged and notoriously dangerous. Huge swells regularly pound the jagged cliffs, trying to beat them into submission.

Just south of town are several great vantage points to see these cliffs close-up. Choose a few and gaze down at the perilous shoreline below.

On a wet, windy day it’s easy to imagine how terrifying it would have been for the poor unfortunate sailing ships, when they ventured too close to this unforgiving shoreline. Not surprisingly, WA’s coastline is littered with shipwrecks.

But then on a clear day, you feel like you’re in paradise.

We visited Red Bluff, Eagle Gorge, Castle Cove and the Natural Bridge. They’re all worth visiting and are easily accessible via tarred access roads.

During whale migration season (May to September), these lookouts are an ideal vantage point for whale-watching. Take your binoculars and follow these giants as they cruise effortlessly through the clear waters below.

Kalbarri National Park encircles the town. It has some unbelievable places to visit, from sensational lookouts to beautiful gorge walks.

The Murchison River has cut a massive gorge as it snakes through the plains east of Kalbarri. The views are spectacular, with the late afternoon sunlight really bringing out the reds and whites in the rocks.

This country was once a sea bed, then a river delta. The river has exposed layers of that ancient sandstone bed, with fossilised sand ripples hinting at what used to be here.

There’re also fossilised tracks of a giant scorpion about the size of a cat… I’d hate to find one of them under a rock!

Be careful if you do any of the walks. Temperatures in summer can be ridiculous… the gorges can be up to 10 degrees hotter than on top.

So a 40 degree day can become a 50 degree day down in the gorges. That’s potentially deadly if you’re not careful.

Avoid walking in the heat of the day. Wait until late afternoon and take three times as much water as you think you’ll need. People have died of dehydration on some of these walks.

You can easily get caught out here on a hot day. Numerous signs warn people have died of dehydration along this walk and to take lots of water.

Don’t be deceived by the temperature in Kalbarri. The gorges can be 10 or more degrees hotter than the town. The Loop Walk in particular is exposed and you would bake against the red rock in the middle of the day.

We walked it on a cool day in late February. The walk closes at 7am during the warm months. If you’re not on the track by 7am, forget it. We arrived at 6:15am and we’re glad we did.

The drive from Kalbarri takes about 45 minutes, so leave in plenty of time.

The walk takes about 3 hours and is exposed in places. Not a walk to take in the heat of the day. It’s best tackled in a counter-clockwise direction.

And what a walk it is!

The first half meanders along the top of the gorge with sensational views to the river below. It’s not a difficult walk, just long. From the top of the cliffs, you appreciate just how deeply the river has cut through the sandstone.

Take time to absorb the incredible views. The early morning sun sets fire to the reds in the sandstone walls, making this some of the best scenery we’ve seen in a long time.

Then you drop down to the river, quite a steep scramble down.

We descended into part shade of early morning, which was welcome. The river wasn’t running, however in some ways this was a bonus. We could walk along the river and gaze up at the myriad colours and shapes of the sandstone walls.

At one point we encountered a long billabong, crowded with honking black swans. They were a bit indignant about us being there!

You continue to follow the river around, back in a loop to where you started. Conveniently, the river doubles back on itself. The last stretch is a hard slog through soft river sand, however it’s well worth the effort.

And while we loved this walk, it would be even better when the Murchison River was flowing.

The last part is a short, steep climb back up to Nature’s Window. And you’re done!

There’s no doubt this is the best walk in Kalbarri National Park. You’ll need a good level of fitness and plenty of drinking water. If the river’s running, have a cooling swim. And most of all, take in the beauty of this place.

This walk branches off the Z Bend Lookout Track and leads you down to the Murchison River in the gorge below.

The track follows a cliff-lined gully. Its walls are sheer in places… layer upon layer of sediment squashed into rock over millions of years. The colours shimmer in the late afternoon light.

You clamber over rocks and down a few ladders, making it a fun walk. Once at the river, if you’re lucky there’ll be enough water for a refreshing swim. And the views up and down the gorge are truly spectacular.

You’re surrounded by towering, multi-coloured sandstone walls. Sit there awhile and soak it all in before making the climb back out of the gorge.

You’ll need a reasonable level of fitness. However, this walk is short and is fairly easy on the body!

This trail leaves the Z-Bend Lookout carpark and heads 3km (6km return) across to a part of the gorge known as Four Ways.

The trail crosses over the open heathland of the National Park, slowly descending into the gorge. The return journey is pretty much all uphill and very exposed.

This trek would be best done in the cool of the morning, during winter.

Unfortunately, Kalbarri Skywalk wasn’t open during our visit. It’s an impressive setup, with cantilevered walks out over Murchison Gorge. Not for the faint-hearted!

You couldn’t possibly visit this area without seeing Nature’s Window! It would have to be one of the most photographed natural features in Western Australia.

This sandstone feature has been eroded away over time to form a “window”, perfectly framing the gorge in the background.

Nature’s Window also marks the start and finish of the Loop Walk (see above). This walk gives you a really good close-up look at the magnificent sandstone rock formations. And you appreciate the scale of this ancient place.

This Lookout is notable for its panoramic views up and down Murchison Gorge.

The river has followed perpendicular fault lines in the uplifted sandstone, cutting a defined Z shape into the sandstone plain. Over millions of years, the water has cut deeply into the soft sandstone, forming the distinctive gorge.

These lookouts are about 40km east of Kalbarri, on the road to the North-West Coastal Highway.

Both are definitely worth a look if you’re going that way.

These are just a taste of the things to explore in Kalbarri National Park. There’s so much more to see!

Kalbarri is a magic spot. It’s such a contrast to the monotonous windswept coastal country to the south.

The magnificent gorges along Murchison River, the wild coastal cliffs and the protected river mouth in the town combine to make this a special place.

Kalbarri is on Nhanda Country.