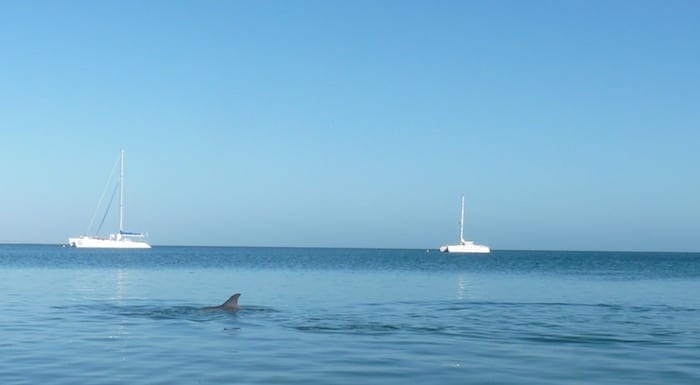 Monkey Mia, An Island Paradise… On The Mainland

Well it is paradise. But it’s not a tropical island. Monkey Mia is on the western side of Shark Bay, about 900km north of Perth. What’s striking about Monkey Mia is the contrast. You drive through mile upon mile of sandy, scrubby, windswept, featureless country. You’ll catch an occasional glimpse of Shark Bay in the distance, but you’re soon back to the same featureless landscape.

Then totally out of the blue, you crest a rise and magnificent Shark Bay appears before you. Monkey Mia is an oasis of palms trees nestled on the edge of a white sandy beach and crystal clear waters.

Monkey Mia is famous for its bottlenose dolphins. More specifically, wild dolphins that come in every day to be fed by humans. This unusual behaviour started innocuously in the 1960s.

How Did This Feeding Begin?

In the 1960s, a fisherman and his wife began to feed bottlenose dolphins. Word spread. People came to feed and swim with the dolphins.

People used to swim with the dolphins, but now there are just too many tourists. The Western Australian Department of Parks and Wildlife took control of Monkey Mia in 1990. Their number one priority is the welfare of the dolphins. As one ranger said, 20 years ago there were a handful of tourists because of the rough corrugated dirt road into Monkey Mia. Now with over a hundred thousand tourists per year (tarred roads and an airport!!), that equals two hundred thousand hands. So the dolphins would either stay away or become aggressive.

The dolphins are fed every morning – but only a small portion of their daily needs. This endures they don’t become reliant on humans for their food. It’s all strictly controlled now and has to be.

Up Close And Personal

We arrived at Monkey Mia on 28th January. At first this might seem crazy – insanely hot and pretty uncomfortable. But it was perfect. We virtually had the place to ourselves. So we all had a turn feeding the dolphins, the rangers had time to answer our questions and generally have a yarn.

In peak season, people can be lined up for a hundred or more metres along the beach and be 10 or so people deep. Not my idea of fun…

Dolphins are beautiful creatures and a delight to interact with. They lie on their sides to look at we humans. It’s a great feeling looking a dolphin in the eye; you can tell there’s a lot going on in their minds.

It’s worth mentioning: These close-up shots were only possible because of the lack of crowds. Most of the close-ups were taken when the four of us were the only ones at the feeding session. One of the rangers found us and told us the dolphins had come back in. Would we like to help feed them? They didn’t have to ask twice! The advantages of travelling with kids…

The young calves were very entertaining. One was only two days old and already about 2 feet (60cm) long. At this age, they don’t arch up out of the water smoothly. Instead, they lift their heads and keep their bodies as stiff as a board. So these tiny little dolphins bob their heads out of the water… while their back half sinks. Looks hilarious and does give everyone a rare opportunity to see their heads clearly. Very cute.

If you’re looking for cruises, tours and accommodation around the Shark Bay area, TourRadar have a wide selection for you.