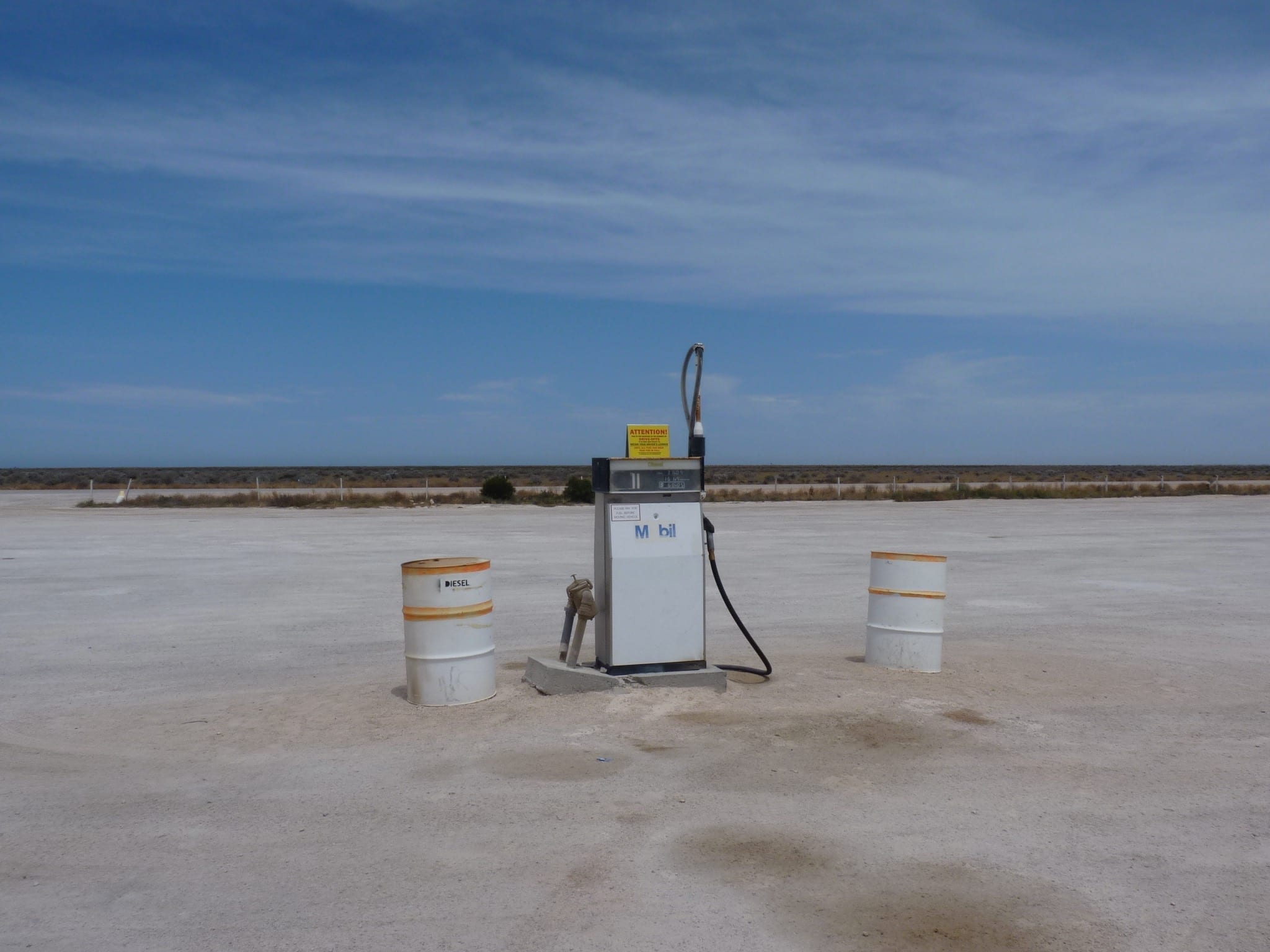 Leaving Ceduna and heading west – what a feeling! You’re about to cross the Nullarbor – 1,200km of flat, treeless plain… at least, this is the image portrayed in the travel guides.

As you’ll discover, the Nullarbor has a lot to offer. And lots of trees… a little weird, since Nullarbor is Latin for “no trees”.

Firstly, A Word Of Warning

Be prepared, stock up with food and water.

If you’re using the Nullarbor simply to get from one side of Australia to the other, then don’t worry too much. There’s enough fuel and food stops to make the trip easily… and plenty of traffic if you break down.

But if you’re planning to deviate off the highway and explore, be prepared. This is especially true when you travel with kids. The amount of food they consume is unbelievable!

And summer temperatures can be insanely hot, as we discovered later in the year. It’s difficult to make sandwiches in 46 degC heat – instant toast!

There are few provisions along the Nullarbor. Several roadhouses exist but they stock very little. What they do stock doesn’t make much sense, eg flavoured UHT milk but no plain UHT milk. Not a criticism, simply an observation.

And don’t forget – you’ll lose all fruit and veges at the WA border. We even lost our jar of honey. So you need to consider other food options for the WA border to Norseman leg.

The biggest watchout is water. We started from Ceduna with about 120 litres and were unable to refill anywhere. Not surprising, but would be a major drama if you weren’t prepared. There is not a “proper” shop between Ceduna and Norseman.

So, What’s In Store For You?

Your first surprise is wheat crops. They stretch at least 150km west of Ceduna. Wait, isn’t this supposed to be the Nullarbor?

About 1-1/2 hours west of Ceduna, turn off the Eyre Highway to Fowlers Bay. Huge white sand dunes tower over the town, threatening to engulf it. They are begging to be climbed, so of course we obliged.

Fowlers Bay, Base Camp For An Epic Journey

Edward John Eyre was an explorer. He described the Nullarbor as, “a hideous anomaly, a blot on the face of Nature, the sort of place one gets into in bad dreams”… and then he decided to walk across it! From Adelaide to Albany in the searing summer heat. I think those early explorers were slightly mad.

In 1840 Eyre, John Baxter and 3 aboriginal guides – Wylie, Cootachah and Neramberein – set off from Adelaide with a plan to walk over 2,000km to Albany.

At the time Fowlers Bay was a favoured haunt for European and American whalers. Eyre had a supply dump established at Fowlers Bay, with supplies being dropped off by ship. This was to be Eyre’s launching point for an epic journey.

Only Eyre and Wylie made it to Albany – the 2 others had killed Baxter and disappeared with the party’s provisions. His Aboriginal companion Wylie had little experience in such an arid landscape. He was a Noongar man from King George Sound at Albany – vastly different country than the arid Nullarbor landscape. Very importantly though, Wylie had the language skills to seek help from other Indigenous people along the way.

Mapped by Dutchman François Thijssen in 1627 and named by Matthew Flinders in 1802, Fowlers Bay was favoured by whalers in the 1840s. Southern right whales and humpbacks would come into the protected waters of the bay to rest. Of course the whalers followed.

Proclaimed a town in 1890, Fowlers Bay had grown to become an important transport hub for locations west of the bay. Large sheep stations like “Yatala” needed a reliable transport link back to markets in Adelaide and further afield.

With the advent of efficient and reliable road transport, Fowlers Bay faded into obscurity. Now it’s a picturesque settlement on the edge of a pristine bay. Recreational fishing, whale-watching and a laid-back atmosphere attract tourists.

Well worth a visit.

Head Of The Bight – Gentle Giants

About 200km (2-1/2 hrs) west of Fowlers Bay is Head Of The Bight. Between the two locations you’ll drive through undulating tree-lined country.

From May to October, Southern right Whales come to Head Of The Bight to mate, calve and just generally hang out together.

A fantastic viewing platform provides uninterrupted views of the whales. You feel like you could reach down and touch them. Yes you have to pay to watch the whales, but believe me it’s worth it. An excellent Visitors Centre will teach you all you ever wanted to know about whales.

We were there in October, right at the end of the season – so weren’t really expecting to see any whales. This particular season, 50 whales with calves had been living there. All the calves had grown and gained strength, ready for their epic swim south in the Southern Ocean. Pair by pair, Mum and bub had left the safety of Head Of The Bight for unknown perils and adventures. All but one pair…

One mother and calf were still there. This was highly unusual. Normally they would have all departed. What a sight. Such majestic creatures – and so big! Mum weighs in at up to 80 tonnes and around 15 metres long… while the “baby” calf is up to 1-1/2 tonnes and 6 metres long at birth.

They were right in close to the shore. Mum was quietly floating around while the calf was playing – disappearing only to pop up behind Mum, in front of Mum – and several times lie on top of Mum. We were mesmerised.

Southern Right Whales are so-called because they were the “right” ones to hunt – slow moving with huge supplies of whale oil.

20 km west of Head Of The Bight is the settlement of Nullarbor. Just a roadhouse and a dusty caravan park. One of only a handful of settlements on the Nullarbor Plain, it’s a popular spot for travellers and professional drivers to pull up and have a break. Nullarbor Roadhouse has a professionally-presented website – well worth a browse.

Next time: Continuing westwards across the Nullarbor – Nullarbor Roadhouse to Koonalda Station.