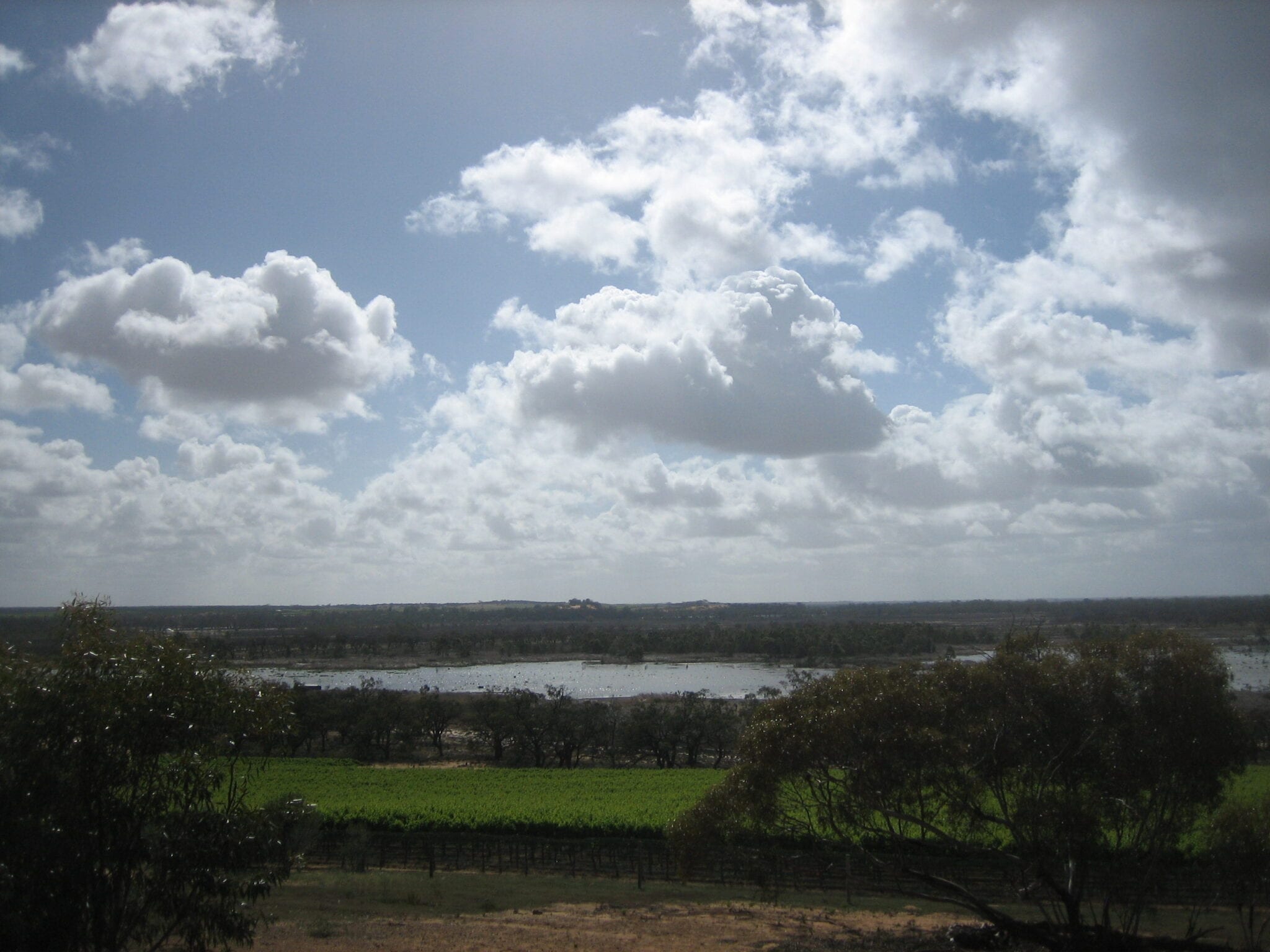 We spent a brilliant day with Ernie Murray (my cousin) at Banrock Station. Ernie is one of 2 rangers permanently employed there. Banrock grow grapes and produce high quality wine. It is exported around the world.

Banrock Station has protected wetlands on the property.  Grapes are grown on the dry hilly slopes away from the river, while wetlands cover several hundred acres on the river flats.

The wetlands used to naturally drain and fill periodically, until the Murray was turned into a series of giant dams. Consequently, the wetlands had been permanently full for many years and were suffering. They originally had a natural inlet and outlet to & from the river… but the inlet is now about 3 metres below the existing water line on the river!

Apparently the Murray’s normal cycle was to flow in good times then dry up into a series of waterholes in the dry times. This was a problem when paddlesteamers were on the river. They could be stranded for many months, so weirs and locks were constructed. Over time the paddlesteamers disappeared but the weirs remained. Local communities had come to rely on them for town water supplies, irrigation and recreation.

So a few years ago, the decision was made to control the draining and filling of the Banrock wetlands to simulate “normal” conditions. The results have been spectacular.

Ernie took us on a brilliant guided tour. The wetlands were drained at the time, so we could cover a large part of it. He showed us heaps of river red gum saplings that started growing since the fill-drain cycle commenced.

We saw black swans with cygnets, all sorts of native flowers and vegetation. It’s a beautiful spot, there is so much to see when you open your eyes. Of course we had our own private tour guide, which always helps!

These magnificent black swans were the proud parents of 3 cygnets. Their nest was a huge mound of weeds in a shallow lake. They lay eggs on top and sit on them, surrounded by the safety of water. Pretty clever.

The wetland inlet and outlet were blocked by banks of soil. It was sobering to see the river level so far above the natural level.

A stainless steel bar grid at the inlet lets the small fish in but keeps out the carp. It was originally built with horizontal bars, but it had to be changed to vertical bars. Apparently the fish refused to swim through sideways. Fussy fish!

The outlet had a clever carp trap. Carp jump, so there was a section in the trap for the carp to jump into. Other fish push through a small opening and continue on their merry way. Very simple but ingenious.

Another of nature’s great mysteries is how the birds know when Lake Eyre fills. Ernie said when it began to fill earlier this year, all of the pelicans disappeared from Banrock Station and surrounds virtually overnight.

The Murray River is renowned for big floods – none more so than the 1956 flood (in whitefella history anyway). The 1956 flood is at the top in this photo. It’s 8 metres from ground level. This flood would have spread hundreds of kilometres out from the river in such flat country. Hard to imagine so much water.

Salinity is a major problem along the Murray River. The artificially high river level has raised the water table under surrounding countryside. There were patches denuded of any vegetation and thousands of dead and dying trees just in the small area of Banrock Station.

It’s the same story up and down the Murray. River red gums hundreds of years old are dying because they are drowning or copping high salinity levels. Very sad and horrible to see – hope it’s not too late, but I’d be surprised if it hasn’t passed the point of no return.

Ernie was going to organise an excavator to break down the bank at the inlet.

All in all a fantastic day and thanks again to Ernie.

2 days after the inlet was opened, we dropped in to have a look. As the photo shows, it was transformed even after such a short time. No doubt the bird life would be back there in force.