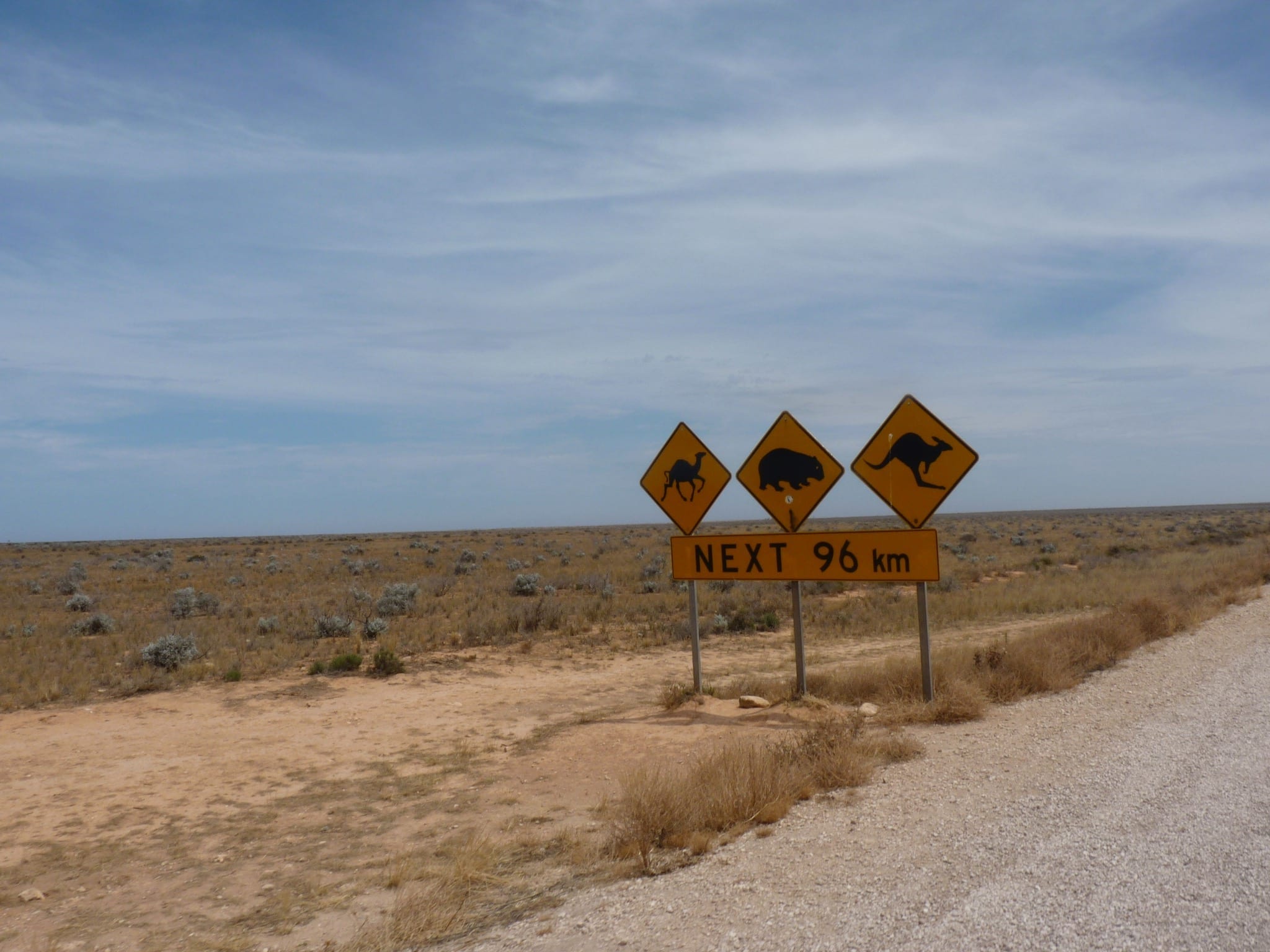 Last time we dropped into Fowlers Bay, whale-watched at Head Of The Bight and had an ice cream at Nullarbor Roadhouse.

The Great Australian Bight is famous for its rugged cliffs and wild coastline. The highway runs quite close to the edge of the cliffs in places. Numerous marked areas let you get off the Eyre Highway and check out the rugged coastline.

The cliffs are quite dangerous. They are unstable and tend to break off in enormous chunks. As a result, several rest areas are closed. You’d be well advised to heed any warning signs… and keep a good eye on your kids.

Actually getting out of your vehicle and walking around gives you a feel for the scale of this place.

Looking south, next stop is Antartica. You’re standing on the edge of the enormous Nullarbor Plain, which is being gradually eaten away by the wild Southern Ocean. Turn around and look north – all you can see is an endless flat, treeless plain. Awe-inspiring.

About 100km west of Nullarbor Roadhouse is the turn-off to Koonalda Station. This turn-off is unmarked. A couple at Ceduna had told us where to turn off – vague instructions about passing the four hundredth camel sign and turn right just after the burnt out log or something like this! However with a decent GPS (HEMA or equivalent), you’ll find it easily.

Follow the dirt road for 14km until you reach Old Eyre Highway. Cross the highway, continue for about a kilometre and you’ll be there.

When we turned off Eyre Highway, I immediately had a strong feeling of remoteness. Completely illogical – the entire Nullarbor Plain is pretty darn remote! Perhaps seeing other vehicles on the highway reassured me we’d have help in case of a breakdown. Then to turn off into a vast open expanse, knowing we were 100% alone… well it was a little unsettling.

Strange. I’d never had this feeling before and it hasn’t afflicted me since. Just saying.

Koonalda Station was to be our overnight rest stop. We’d covered over 400km since leaving Ceduna in the morning. Not bad, considering we weren’t in a hurry to get anywhere.

Situated in Nullarbor National Park, it was a working property until 1988.

The homestead is falling apart, the roof is caving in and of course there’s dust covering everything. It looks sad and forlorn. The exterior is made from railway sleepers from the Trans Australian railway and some windows and doors are from the old Telegraph Station at Eucla.

Victims Of The Old Eyre Highway

First impressions of Koonalda Station are that it’s like an old scrap metal yard. Immediate thought? “Yuk, what a mess”. Rows of old cars in various states of disrepair seem to be scattered everywhere. But once you realise why the cars are there, the place takes on an entirely different complexion.

Remember, it was a dirt road all the way across. Rough and corrugated with reefs of rock and bull dust in the dry. In the wet, an ocean of mud. Breakdowns were common. Unreliable cars travelling huge distances on such a notorious road was a bad combination.  So when a vehicle expired – a common occurrence – it would be towed in and used for spare parts.

Ghosts Of The Past At Koonalda Station

Koonalda’s a pretty spooky place at night. Wind rattling through loose corrugated iron roof sheets and doors banging on their hinges actually freaked me out a bit. While the place is fascinating and a stark reminder of hard times from our recent past, it’s also full of ghosts.

Standing at the old fuel pump, you can almost see the old Holden trundling down the highway, smothered in a cloud of dust…  an old bloke wandering out of the shed in his overalls… an oily rag in his back pocket… gazing at the billowing dust in the distance across the shimmering Nullarbor Plain… waiting to see if the car turns in or continues on its way.

Late in the afternoon, a strong southerly change came through. Now a southerly in these parts can be savage – and it was. Fierce winds straight out of the Bight and no protection between the coast and our campsite.

We thought we were clever by setting up camp behind a shed. It worked a treat, until the wind swung around from the east in the middle of the night. All of a sudden, our little oasis was exposed to the full force of an easterly gale. All night the camper creaked and groaned… and the orchestra of old doors banging and corrugated iron flapping away continued.

This was an initiation into the changeable weather and winds in this area. Be aware – strong winds can and do swing around a full 180 degrees in a matter of moments.

If travelling with an organised group is more your thing, TourRadar have some good deals on adventure tours across the Nullarbor Plain.

Next time: Checking out Koonalda Cave.