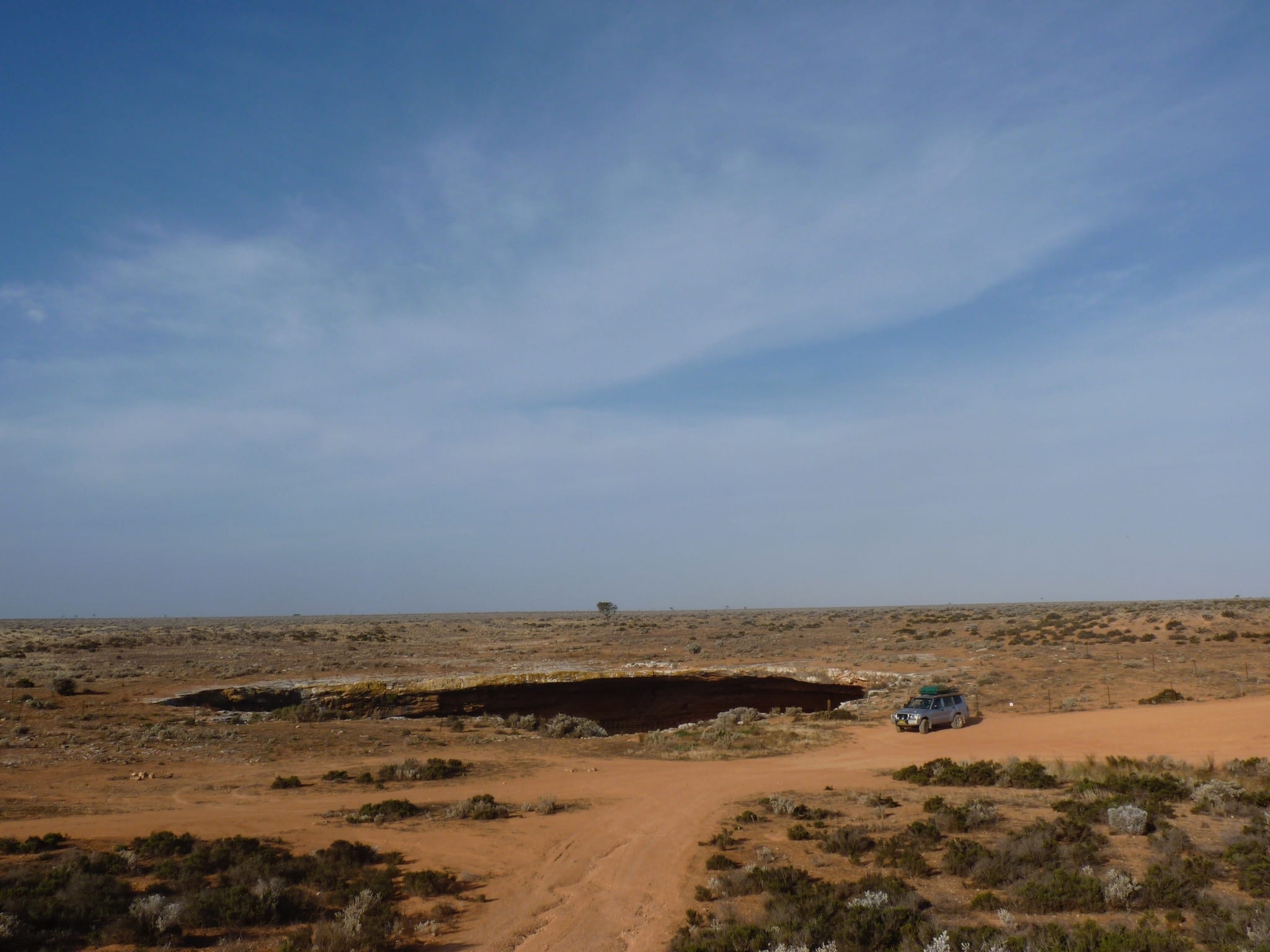 Last time we checked out the views from the cliffs of the great Australian Bight and had a good look around Koonalda Station. Go here if you missed it.

Koonalda Cave – What Lies Beneath The Surface?

The Nullarbor is basically a huge slab of limestone. In places, the limestone has dissolved to form caves. Some of these caves connect with the ocean to form blowholes, while others contain drinkable water.

Koonalda Cave lies a few kilometres north of the homestead. Measuring 85 metres in diameter, this is a seriously large hole in the ground. The only indication of the cave is a fence. You won’t see the sinkhole until you’re right on top of it.

The sides drop vertically for about 20 metres – some parts are even undercut. From here, a steep slope leads down to the floor at about 70m depth. At this point, the cave opens into a giant 60 x 90 metre cavern. A domed roof towers about 40 metres overhead.

Apparently, various caves branch off from the main chamber. Deep underground, Indigenous art dating back 22,000 years was discovered mid 20th century. Long lines of finger painting etched in the soft walls have given archeologists something to argue about… how they were created, given there’s no natural light… what they mean… maybe they’re just ancient graffiti… maybe they have cultural significance… maybe they point out where the flint mines are…

Koonalda Cave was explored by archeologists in the mid 1950s. At the time, it was thought Aboriginals had occupied Australia for “only” 8,700 years. This discovery turned accepted knowledge on its head.

The local Mirning people used the cave to mine flint and as a source of drinking water. Being hard and durable, flint was ideal for stone tools. Remember, this was happening around 22,000 years ago.

More recently, Koonalda Cave was used as an initiation site. Modern cavers use ropes and ladders to descend the cave. But the Indigenous people have a pathway down the sheer walls – they have no need of ladders.

The Plain Lives And Breathes

Modern Indigenous people were afraid of the Nullarbor. They believed the magic snake Ganba lived below the surface. He would come to the surface and thrash around, causing dust storms. He would drink all the rainwater – as soon as it rained, the water disappeared. He ate all the trees. He ate people – many people entered the Nullarbor, never to return. He was an all-round bad dude.

It’s a great explanation of what these people witnessed. Think about it – there are many sinkholes descending into caves. A change in air pressure at the surface causes the air to either rush in or out of the holes. Small holes in the plain that appear to be breathing. Even worse, the accompanying sounds can send chills down your spine. Ganba’s down there – it all makes sense.

Therefore the Indigenous people tended to live along the coast and not venture far onto the plain. Fresh water was found in soaks behind sand dunes. Given Ganba was lurking, Koonalda Cave was used as an initiation site – the ultimate test of manhood.

Next time: Reaching the WA border – The Old Eyre Highway and Border Village.