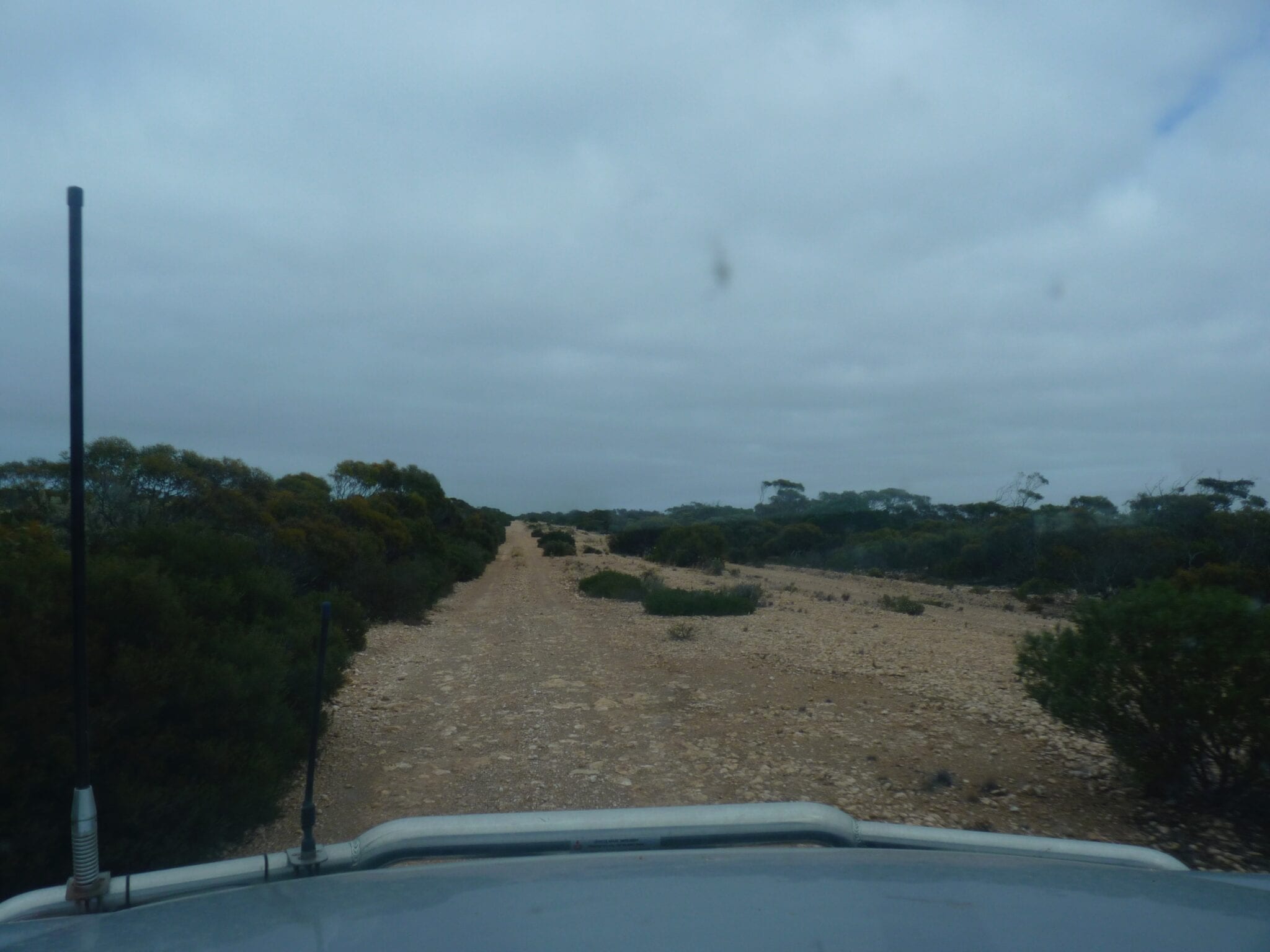 Last time, we peered into the mysterious depths of Koonalda Cave.

Clearly, the weather gods decided we needed an initiation. A ferocious Easterly gale overnight tried to blow us clean off Nullarbor Plain!

Back onto the Eyre Highway and travelling west again. At least we had the wind behind us. This part of the Great Australian Bight is feared by sailors. A couple of really good viewing areas showed us why…

The ocean was a boiling cauldron, smashing up against the giant limestone cliffs. The photos simply don’t do it justice.

Turn right off Eyre Highway about 20km east of Border Village. This takes you to a short section of the Old Eyre Highway. It gives you a small taste of what road conditions were like.

We encountered a huge camel on the track. He ran in front of us for ages, wagging his oversized camel head from side to side. There was no way he was going to get off the track! His bottom lip was flopping around all over the place as he ran – looked hilarious and the kids were in hysterics.

Old Eyre Highway takes you to the eastern edge of Border Village. Its surface is hard rock all the way. When it was the main route, it would have been a nightmare journey – hard limestone rock for hundreds of kms, huge corrugations, bottomless pits of bull dust, then mud in the wet.

Old Eyre Highway was notorious for rollovers. The car graveyard at Koonalda Station is testament to this. Bull dust holes were the main cause. Almost impossible to see but when you hit one at speed, you and your vehicle would be launched into the air or whipped sideways. Cars and trucks often ended up on their roofs.

Old tyre tubes are still strewn along the road. It wasn’t unusual to carry 6 spare tyres back in the days of cross-ply tyres and tubes. Then you’d be repairing tubes on the side of the road once they were all used up.

The old highway looks lonely now. Bushes and trees grow out of the surface and it has a slightly spooky and abandoned feel. One day we’ll re-trace the old highway. If you decide to travel this road, be aware it’s very remote and really is the “road less travelled”. Be prepared.

Ray Gilleland has written a fascinating account of his daily struggles with the Old Eyre Highway. He was a long-distance truck driver from Sydney to Perth and return in the 1950’s. Called “The Nullarbor Kid”, it’s well worth reading – a living history of times gone by.

Border Village – They Stole Our Honey And Messed Up Our Time Zones!

Back onto Eyre Highway at Border Village and through the fruit quarantine station. All fruit disappeared into the bin, along with our precious jar of honey. There’s a business opportunity for a fruit shop here!

You’ll need to turn your clocks back to Central Western Standard Time. We never even knew there was such a thing! Very confusing.

Border Village is a popular rest area for professional drivers… and a popular point for travellers attempting to eat thirty oranges before they cross over the border.

Next time: Driving into Western Australia at last.