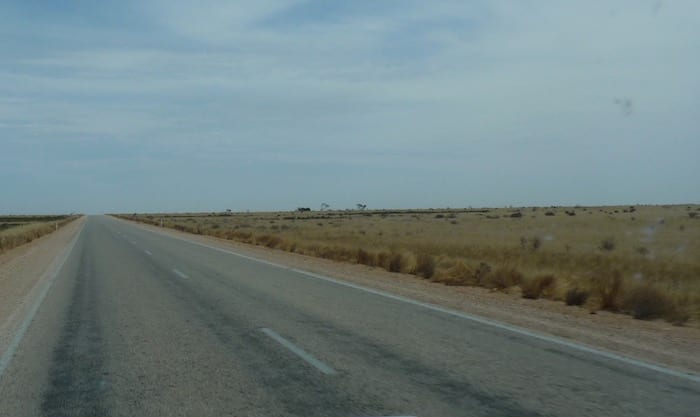 Last time, we reached the end of our Nullarbor journey. We really only scratched the surface though. With more time, you could spend weeks exploring the Nullarbor.

Let’s have a look at some other options for you.

What Else Can I See Along The Nullarbor?

You have a choice of some quite unusual travel destinations… places rarely visited. We’ll have a quick look at some of your options.

This list is by no means exhaustive. Rather it’s a starting point to give you more ideas on what to see as you explore the Nullarbor Plain. We’ve not been to many of the places listed below – yet. We’ll add them as we explore each and every one of them!

You can follow the old Eyre Highway all the way from Nullarbor Roadhouse to Border Village in the west. It’s a magic trip through the past. When the highway was re-aligned further south in the 1970s, the old highway was no longer maintained.

You’ll get a feel for what an epic journey this was. Picture in your mind the mud, dust and corrugations for hundreds of kilometres.

While you’re there, take a side-trip to Cook, “Queen City of the Nullarbor”. This once-bustling town is now a lonely outpost for a few hardy souls. it’s well worth a visit, if only for the quirky signs and murals dotted around the old town.

Caves are dotted all across the Nullarbor. A hole the size of your fist on the surface could well open into a giant underground chamber. Even caves that appear to be big on the surface can be many times larger underground. Koonalda Cave is one such example.

Many websites can give you a glimpse into the Nullarbor’s magical underground world. just a few examples are Australian Geographic, The Wilderness Society and this video from ABC Science Online. Although slightly dated (from 1993), it has some beautiful footage of the caves.

Stretching over 1,700km from Port Augusta in the east to Kalgoorlie in the west, the Trans-Australian Railway is a vital transport link. It includes the world’s longest straight stretch – an extraordinary 478km. It was completed in 1917.

Access along the service track beside the line is strictly prohibited. People still run the gauntlet and drive or ride the access track. However, remember you are travelling through private property – I’m sure you wouldn’t like random people driving through your back yard. Secondly, if you break down and the train has to stop you’ll be paying a massive fine. This covers the cost of stopping and re-starting a huge train and the delays you’ve caused at the other end. You’ve been warned…

There are over 50 settlements listed along the line. They were established to supply and maintain the steam locomotives and the line itself. Most are now ruins or on private property. The remainder are ghost towns. Once the line was privatised, the few remaining residents left for good.

However, you can access a few of the settlements along the line from the Eyre Highway to the south. Information is sketchy, but if you’re really keen, start here. And here is a personal account of the “good old days” on the line.

Kalgoorlie Tourist Information Centre and Wadlata Outback Centre in Port Augusta are great starting points. They should have up to date information on access to settlements along the line.

Nullarbor Links – Fancy A Round Of Golf?

If you’re desperate for a golf game as you cross the Nullarbor, you’re in luck! The 18 hole Nullarbor Links golf course spans the Nullarbor. But bring your golf cart – it’s nearly 1,400km from start to finish. Hole 1 is at Ceduna, hole 18 at Kalgoorlie. Enjoy!

Pedestrian.tv have a light-hearted video on Nullarbor Links.

In the 1950’s the nuclear arms race was in full swing. Britain was desperate to catch up with the US and USSR. What better place to test nuclear weapons than the Australian Outback? After all, there’s nothing out there… is there?

British colonial arrogance and Australia’s simpering submission to the “mother country” were a bad mix. The effects of nuclear fallout on the local Indigenous population were ignored. A sobering account can be found here. Be sure to watch the video at the end.

Accounts of servicemen being used as human guinea pigs and numerous birth defects have also come to light over the years.

Maralinga is a shameful chapter in our history.

Having said this, Maralinga is a popular destination for those wanting to see it for themselves.

The Connie Sue Highway runs from Rawlinna on the Trans-Australian Railway to Warburton in central east WA. Built by the famed Len Beadell, it can be accessed from Cocklebiddy on the Eyre Highway.

Be warned – it is a highway by name only. The Connie Sue is remote and unforgiving. Preparation is essential.

Nuytsland Nature Reserve is located on the coast, south of Cocklebiddy. It’s best known as the site of the Eyre Bird Observatory. The observatory was actually Eyre Telegraph Station before it was moved away from the coast.

So there you have it. The Nullarbor’s so much more than a treeless plain.

Of course there’s way more to see than what I’ve listed above. The Nullarbor’s full of surprises, and a few rather unusual travel destinations!

And always remember to have a yarn with the locals. The people are friendly and relaxed. Typical country people…

So which way are you going to go? North to Kalgoorlie and the massive Super Pit? North then east to Perth? Or South to Esperance? Let us know in the Comments below!

We’ve rolled our Nullarbor road trip into an ebook. You can find this on our Free Resources page.