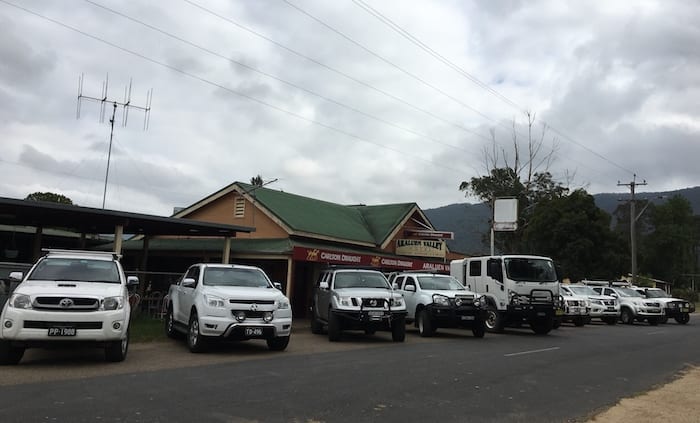 And The Winner Is…

At Last, Testing Time For The NPS!

If you bought a 4×4 off-road truck, the first thing you’d do is head for some wild country bush fire trails and see what it could do, right? Well, that was our plan too. But a zillion things got in our way and it just didn’t happen.

So when a mate rang to see if we wanted to take on the Bendethera fire trails, we jumped at it. No more excuses!

Bendethera Valley is in the Deua National Park, south-west of Araluen in the New South Wales Southern Tablelands. We accessed Bendethera from Araluen, via the Merricumbene fire trail. Confused? Check out the map below.

Night one was spent at Araluen Valley Hotel, (or Araluen Pub). Araluen Valley was once a rich gold mining town full of pubs, over 15,000 hopeful gold miners… and the notorious Clarke Gang. The Clarkes were a particularly vicious brand of bushranger, not afraid to kill if the need arose.

These days Araluen’s best known for its apple orchards, although these have dwindled over the past couple of decades.

Leaving Araluen, we took the Moruya Road south for about 22km then turned off onto Merricumbene Fire Trail. You cross the Deua River then it’s on – up, up and up!

The trail is steep and winding with its fair share of tight switchbacks. Loose shale makes for a wild ride at times. And sheer drop-offs on both sides are a great incentive to keep focussed! Of course the videos don’t do it justice.

Merricumbene Fire Trail generally follows insanely steep ridge lines for most of the way. The views are spectacular. Fantastic 4WDing! A quick lunch stop then on we go.

I had been this way several years ago in a Pajero… and vowed never to come back. Never say never! All fire trails were in much better condition this time around plus the Isuzu just did it so much easier than the Pajero. It was actually pretty scary in a mildly lifted Paj with open diffs.

Our trusty spotter Warren guided us into the deepest part of the second river crossing. He just wanted to check the Isuzu’s wading capabilities… thanks Warren! All good, no dramas. Those diff, gearbox and fuel tank extended breathers just paid for themselves. It looks pretty shallow in this video, but don’t forget these tyres are equivalent to 35″ tyres on a 4WD.

Bendethera Valley is beautiful. Huge mountains surround a delightful green valley. Kangaroos are the main inhabitants, thriving on the green grass. Once an extremely isolated cattle property, the Valley is now part of Deua National Park.

You’ll have no problem finding a secluded camping spot. The Valley is several kilometres long and has loads of private places to camp. Even our large group had the option of several spots, away from other campers. We had a swim in the nearby river – cold but really refreshing!

What better place to have a camp oven roast than here? The competition was fierce. The winners were the ones who sat around doing nothing – then ate the results (I’ll put my hand up here!).

Dampier Fire Trail – Up, Up, Up Again

We all dragged our heels the next morning. None of us wanted to leave. We drove to the end of the Valley and had a look around. You could easily spend a few days here, such magnificent country. Bendethera Caves are a popular attraction and the Valley is dotted with remnants of the old cattle property.

Reluctantly we headed out of the Bendethera Valley, taking the Dampier Fire Trail. Again, this trail is seriously steep. It had a few interesting spots – large diagonal holes near the top of shaley erosion drains. We hardly noticed them in the Isuzu.

Eventually you’ll hit Krawarree Road. Right to Braidwood, left to Cooma. Your adventure is over!

And The Winner Is…

This trip is a challenge. Okay, if you have a GU Patrol with a 20″ lift, 5 Fox Racing shocks at each corner, a 600hp 15 litre Cummins Diesel, 18 speed Roadranger gearbox with 10 speed transfer case, 87″ Mickey Thompson muddies and 25 UHF antennas on your cut down Kenworth bullbar… then maybe not.

But for those of you who spend most of your time driving to and from work in a standard 4WD, it is a challenge. And heaps of fun.

So how did the Isuzu NPS handle it? In a word – easily.

Low gearing, large tyres, lots of wheel travel, limited slip diffs front and rear and enough torque made for a sure-footed ride. Nothing really challenged it at all.

Yes it was probably a lot bouncier than a 4WD wagon or ute and we had to watch out for low branches. And it was slow compared to the utes and wagons. But it really was a walk in the park.

The view out of the cab-over was sensational – no large bonnet to obscure your view. And the exhaust brake? Brilliant!

Can we do it again next weekend…

Our Isuzu NPS runs Toyo M608Z truck tyres – 285/70R19.5. They are an off-road truck tyre. Their heavy sidewalls don’t really bag out when aired down – instead the footprint gets longer.

Tare weight as you see the truck here is around 4.5 tonnes. On tar we run 80psi at the back and 75psi at the front.

On this trip we tried airing down to 60psi, but it was too rough and bouncy. By airing down to 45psi, we found the truck was really settled over the rough stuff. It seems 45psi is the ideal pressure for off-road driving.

Can’t wait to take it out again!