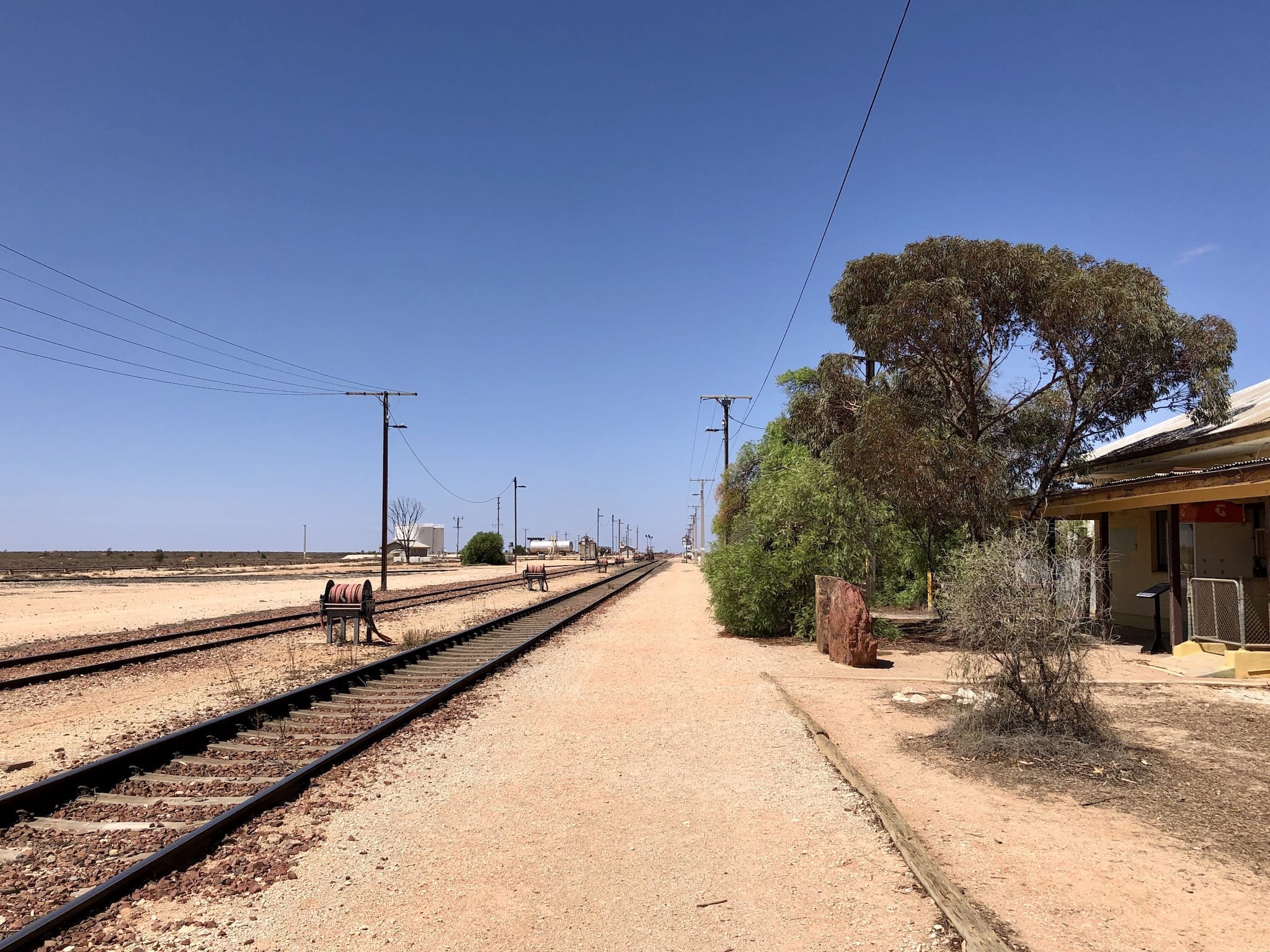 There we were, trundling east along the Old Eyre Highway. Peta looked and me and asked, “How much fuel do we have?”

Now Peta has a knack for discovering out of the way places and rarely-used tracks. So my response was a guarded, “Heaps, why?”

“Do you want to go to Cook?”  With that we were soon turning left, heading towards what we thought was a deserted ghost town… a remnant from the days when the Trans-Australian Rail Line was dotted with settlements between Perth and Adelaide.

We followed the old vermin-proof fence for a while, until it turned sharply east and disappeared to the dead flat horizon.

Just one slight bend and 100km later, we rolled into Cook.

The only features along this road are a few old metal trig points and lots of signs counting down the distance to Cook. They’re almost saying, “Keep going, you’re getting there!”

The road is generally good, with plenty of limestone rocks to dodge. No surprises there!

Eventually, a tall tower came into view across the flat Nullarbor Plain. Then a grove of large trees took shape. We weren’t expecting that!

Getting closer, we saw a line of huts like you see in countless mining villages. What’s going on, we wondered? We thought this place was deserted.

We drove to the railway line and stepped out to get a lay of the land. A friendly young bloke arrived in a ute. His name was Chris, born and bred on this rail line. His father had worked on the line and now Chris did as well.

He explained the huts were for Pacific National train crews. They swap over at Cook and return to home base. Several crews can be sleeping here at once, hence the need for multiple huts.

Chris said he was one of four permanent residents, all caretakers/maintenance workers for Pacific National. They’re on a rolling roster. Pacific National own the Trans-Australian Rail Line, and lease “line space” to competitors.

He said to keep away from the huts so we didn’t disturb the crews’ sleep and not to go within 5 metres of the rails, since competitors’ trains can come through at 100km/h. Fair enough!

Otherwise we were free to have a good look around.

Cook is now a town of two parts. The rail crews’ quarters and the caretaker/maintenance houses are grouped together, slightly separate from the old town.

Most of the buildings are now condemned, including the impressive two storey school we camped beside. Neatly paved footpaths still run beside and between now-vacant lots. The trees and concrete slabs give you a feel for the town’s original layout.

Clearly Cook had a strong community and they were proud of their history. Over 200 people lived here back in the day.

And what of those trees? In 1982 the community planted 600 gum saplings. Over 30 years later, these trees provide welcome shade in an otherwise treeless expanse.

Interpretive signs explain the significance of the remaining buildings and help bring the place back to life. they’ve done a great job. Whoever wrote the signs had a sense of humour and an eye for detail.

They had a hospital, swimming pool, school and of course the railway station.

Some local wag christened Cook, “Queen City of the Nullarbor”. Somehow this name has stuck. In fact, the old town has plenty of humorous signs and murals… it’s a quirky place with a sense of humour.

And even though it’s a ghost town, Cook doesn’t feel deserted. It doesn’t have that familiar eerie feeling most ghost towns have.

Quite the opposite in fact. It has a friendly feel… even though it’s all but deserted!

If you walk past the old train station, you’ll notice about a dozen large hose reels on the opposite side of the track. The Indian Pacific uses these to re-fill its water tanks on the way through.

A train brings water in from Perth, sparing passengers from drinking the local bore water.

It stops here on the way through and passengers get a chance to get off, stretch their legs and wander around. Unfortunately, we missed the weekly Indian Pacific stopover by one day. It would have been fun to speak to some passengers. Next time!

Cook is on the longest Straight section of rail track in the world, a whopping 478km long. And by now you’ve probably realised the country is as flat as a billiard table.

So when a massive freight train appears way in the distance, it’s like a giant steel wall has risen out of the plain.

These huge trains are a couple of kilometres long, stacked two high with 40-foot shipping containers. They amble in slowly, creaking and complaining all the way in. When they finally roll to a stop, the sound of rail couplings hitting their stops snakes down the train all the way into the distance.

We’re not train buffs in any way, shape or form. However, these trains look so out of place in this ancient landscape that you can’t help but be drawn in by them.

And the line’s surprisingly busy. Three trains came through while we are there. You can see the headlights at night way before you hear them.

Cook is like stepping into an alien world. After driving 100km across a flat, treeless plain it takes a while for your brain to process what’s happening here. The town, the trains, the activity… they’re all completely foreign to this landscape.

And this is what’s so good about Cook.

It’s a vital link in the Trans-Australian Rail line, plonked smack-bang in the middle of one of the harshest places on earth.

Cook is north of Mirning Country.

FAQs – The Trans-Australian Railway and the Indian Pacific

So work started between Kalgoorlie and Port Augusta, SA in 1912… just on 1,700km across one of the harshest landscapes in Australia.

The line was built from both directions, finally completed in 1917. Over 2.5 million timber sleepers were laid under almost 150,000 tonnes of steel rail lines.

3,500 people worked on the line’s construction in some of the most difficult conditions imaginable… searing hot days, freezing nights and winds howling from every direction.

The Trans-Australian Railway includes the longest straight stretch of rail line in the world, 478km of dead-straight track.

When was the Trans-Australian Railway Built?

How Long is the Trans-Australian Railway?

Total distance from Sydney to Perth by rail is 4,350km. The Trans-Australian Railway runs between Port Augusta, SA and Kalgoorlie, WA and is 1,700km long.

What’s the Tea and Sugar Train?

The Tea and Sugar Train serviced remote communities along the Trans-Australian Railway line between Kalgoorlie and Port Augusta. It started in 1915 and finally stopped running in 1996.

In the days of steam trains and timber railway sleepers, communities were dotted along the line to maintain and service both the rail line and the steam trains.

As diesel trains became more common, these communities gradually dwindled. By 1996, the Tea and Sugar Train was no longer needed.

It used to supply every need… groceries, fresh meat, a library, banking facilities, medical services, mail and even a small theatrette!

Nowdays, the Indian-Pacific delivers to those few communities that still have a couple of residents.

How Long Does it Take From Sydney to Perth by Train?

The Indian-Pacific takes 4 days (3 nights) to travel from Sydney to Perth (or Perth to Sydney).

The Trans Access Road runs from just east of Kalgoorlie to the Western Australia/South Australia border, and runs parallel to the Trans-Australian Railway. At just on 1,000km, this dirt road is suitable for 4WDs only.

The Trans Access Road services several large outback stations. Like most outback roads, its condition depends on when the grader was last through. It could be okay… or it could be horribly rough, depending on your timing.

This is a remote road. Be fully prepared with a suitable vehicle, plenty of food and water and a satellite phone or PLB. Go here for more details on ensuring you have a safe journey.

Where Does the Indian Pacific Go?

The Indian Pacific runs from Sydney via Broken Hill, Adelaide and Port Augusta to Perth.

How Much Does the Indian Pacific Cost?

Prices vary depending on time of year and the level of service you prefer. Go here for full details on pricing.

Who Owns the Indian Pacific?

Great Southern Rail (re-named Journey Beyond Rail Expeditions) is the umbrella company over The Indian Pacific, The Ghan and The Overland passenger rail services.

How Often Does the Indian Pacific Run?

Where Does the Indian Pacific Stop?

The Indian Pacific stops at:

When Did the Indian Pacific First Operate?

The first trip across the country from Sydney (Pacific Ocean) to Perth (Indian Ocean) was on 23rd February, 1970.

Can I Take my Car on the Indian Pacific?

You can take your car between Perth and Adelaide, but not between Adelaide and Sydney.

Go here for detailed info on your road trip across the Nullarbor!