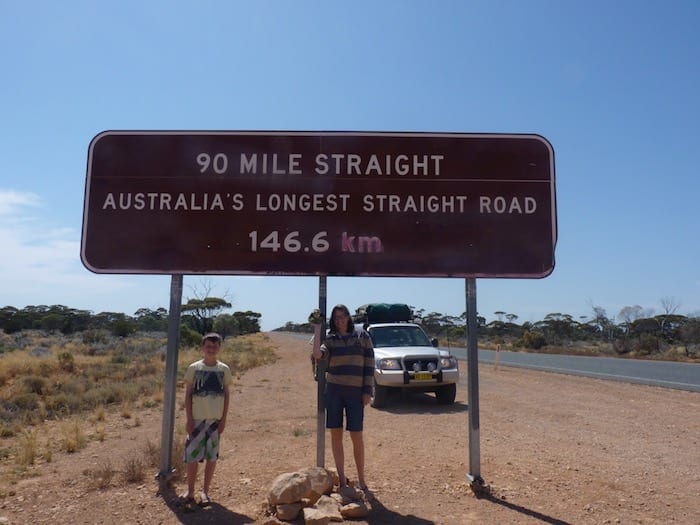 Last time, we checked out Eucla… and were pretty confused with time zones.

Caiguna is at the eastern end of the 90 Mile Straight… 146.6km of arrow-straight road. It’s the longest stretch of straight road in Australia and one of the longest in the world. These facts give you something to look forward to as you start your drive along this straight. But after a while, reality sets in and monotony takes over.

It’s almost like Caiguna was established just to give people somewhere to pull over and recover from holding the steering wheel dead straight for 146km.

Actually, this is not far from the truth. Caiguna was established in 1962 to provide facilities for people driving to and from the Commonwealth Games in Perth.

Balladonia – The Sky Is Falling!

The settlement of Balladonia is 200km and just a few gentle curves west of Caiguna. Nearby Balladonia Station was established in the 1870s as a sheep station. Balladonia settlement was another link in the Overland Telegraph line. Today, travellers enjoy welcome break from their long journey in a modern roadhouse and motel.

Balladonia’s claim to fame is its connection to Skylab. For those too young to remember, Skylab was the United States’ first orbiting space station. It orbited the Earth from 1973 to 1979. Skylab sustained damage at initial launch, which was patched up by the first group of astronauts to visit Skylab. However, over time Skylab’s orbit had been affected and eventually it re-entered the Earth’s atmosphere.

Skylab’s re-entry made worldwide news at the time. Of course the tabloids went crazy with predictions of mass wipeouts in major cities. NASA frantically tried to steer it away from populated areas and and it looked like Skylab would fall to Earth in South Africa.

On 11th July, 1979 Skylab came back to Earth in Western Australia, not South Africa as forecast. Balladonia was one of the places showered with space debris, prompting President Jimmy Carter to apologise for the mess!

Fraser Range Station is east of Balladonia, nestled in the granite hills of Fraser Range. You’re back into the trees – in fact you’re surrounded by the biggest hardwood eucalyptus forest in the world. Everything’s big in Western Australia!

You’re now a stone’s throw – just 105km – from Norseman, the unofficial end of the Nullarbor. Fraser Range Station is a great place to put up your feet and chill out for a while.

We took this opportunity to catch up on the kids’ schooling and do some washing. They loved the place. Rob the Manager took the kids to change over the generators and do various odd jobs. They loved riding around in Rob’s old Nissan Patrol ute.

Norseman is the unofficial end of your Nullarbor journey. Congratulations, you made it!

Now you have a choice to make – North or South? Turn south – access to South-West WA… Esperance, Albany, the giant Karri and Tingle forests. Turn North – access to the Goldfields, Perth and the rest of Western Australia! The choice is yours…

Next time: Discover all the other things you can do along the Nullarbor.