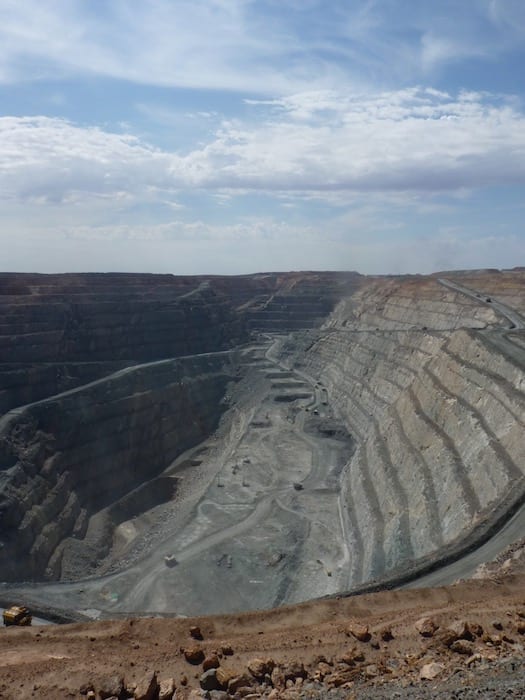 Approaching Kalgoorlie from Norseman, you’ll notice an enormous tailings heap on your right. This goes on seemingly forever. Welcome to the Kalgoorlie Super Pit!

As you get to the outskirts of Kalgoorlie-Boulder, there’s a Super Pit viewing area on your right. Once you reach the viewing area, you’ll quickly realise one simple fact.

In fact, it’s so big that you’ll have trouble getting your head around the sheer scale of this giant hole in the ground. Enormous mining equipment appears as tiny ants crawling over a huge hole. At first it looks like chaos. But then you start to make out vague patterns of where the trucks are going to and from.

And go back there at night. It looks like another world, a scene from a fantasy movie.

You’ll actually figure out what’s happening more easily at night. We realised there were four huge excavators and the dump trucks were peeling off then going to the respective excavator.

In between the huge trucks, an enormous grader darts all over the place, keeping the roads maintained. This looks like dangerous work.

How Did This Begin?

Gold nuggets were discovered on the surface in the 1880’s. Paddy Hannan is credited with the original discovery. Paddy did pretty well for himself, taking over 100 ounces from the Golden Mile.

The first miners had a bonanza, collecting nuggets from the surface. Of course, these quickly disappeared as word spread. With a full-on gold rush under way, thousands of hopefuls flocked to Kalgoorlie seeking their fortune.

The surface nuggets rapidly disappeared, so the miners did what miners do… they started digging.

But when they started digging, they couldn’t find any gold. Eventually someone realised the gold was in tiny specks almost too small to see and they had been throwing it away with the tailings. So the miners revised their gold recovery methods and the rush started in earnest.

Fast forward to the 1980’s. Failed businessman Alan Bond saw an opportunity. He had a vision to buy up all the individual mining leases on the Golden Mile and amalgamate them into one giant mine. While Bond was unable to complete this vision, a subsequent venture succeeded and the Kalgoorlie Super Pit was born.

These were dug mainly by hand through rock. Some of the shafts are up to 1,600 metres (1 mile) deep.

And the shafts and tunnels are full of old timber supports and steel. The timber is covered in arsenic to ward off termites and very few of the mines are accurately mapped.

About 3,500km of tunnels were dug by hand in the area now covered by the Super Pit. This is approximately the distance between Kalgoorlie and Sydney in a straight line.

All of this adds up to a giant headache for the modern miners.  Every blast has to be carefully surveyed before charges are laid, as an unidentified void could have disastrous consequences. The timber supports and old steel cause headaches for the giant excavators as they load the ore into trucks.

Then once the load arrives at the top of the pit, the timber and steel has to be removed manually. It’s dumped then labourers sort through it by hand or remove the heaviest bits with a front end loader. Wouldn’t that be a fun job in the middle of Summer…

We did a tour of the mine. You get a close-up perspective of what a massive operation this is. This tour is excellent and we highly recommend it.

The mine itself is around 3.5 km long by 1.5 km wide and over 600 metres deep. The Golden Mile is actually about 2 km wide, to a depth of 1 km. The Mt Charlotte underground mine is at the northern end of the Super Pit. From the viewing area, you’ll see trucks disappearing into the earth way in the distance. They are hauling out of Mt Charlotte.

Groundwater is about 60 metres down and is nine times more salty than ocean water.

Because Kalgoorlie is such an arid environment, this salty groundwater is used to wet down the roads. In this environment, the dump trucks survive for about 8 years before they are too badly corroded to continue service.

When the mine eventually closes, the pit will be allowed to fill with this salty groundwater and form a salt lake. Then if mining again becomes viable in the future, they can pump out the water and start mining again.

Up close, the dump trucks are huge. They carry 200 tonnes and are mostly driven by women. Apparently they are cleaner, gentler on the equipment and have a better ear for detecting mechanical problems.

When a driver is due for a break or change of shift, they drive up to an elevated platform beside the amenities and canteen facilities. One driver steps out and another one steps in. This keeps the trucks moving 24/7.

On average, each 200 tonne load contains a minuscule quantity of gold, all in minute specks not visible to the human eye.

So every massive 200 tonne load you see being hauled out of the Kalgoorlie Super Pit contains about the equivalent volume of 3 or 4 strips of chewing gum in gold.

Of course, every load adds up over time. They mine about $2 million worth of gold every day. To me, this doesn’t seem much when you see the infrastructure needed to achieve this. The overheads must be massive.

Kalgoorlie Super Pit is quite simply staggering. Photos and videos don’t do justice to the scale of this operation. If you get a chance, have a look!

Kalgoorlie is on Wangkatja Country.

TourRadar offer a great range of deals on tours in and around Kalgoorlie.

Next time we check out Kalgoorlie and discover an unexpected family link to Kalgoorlie-Boulder.