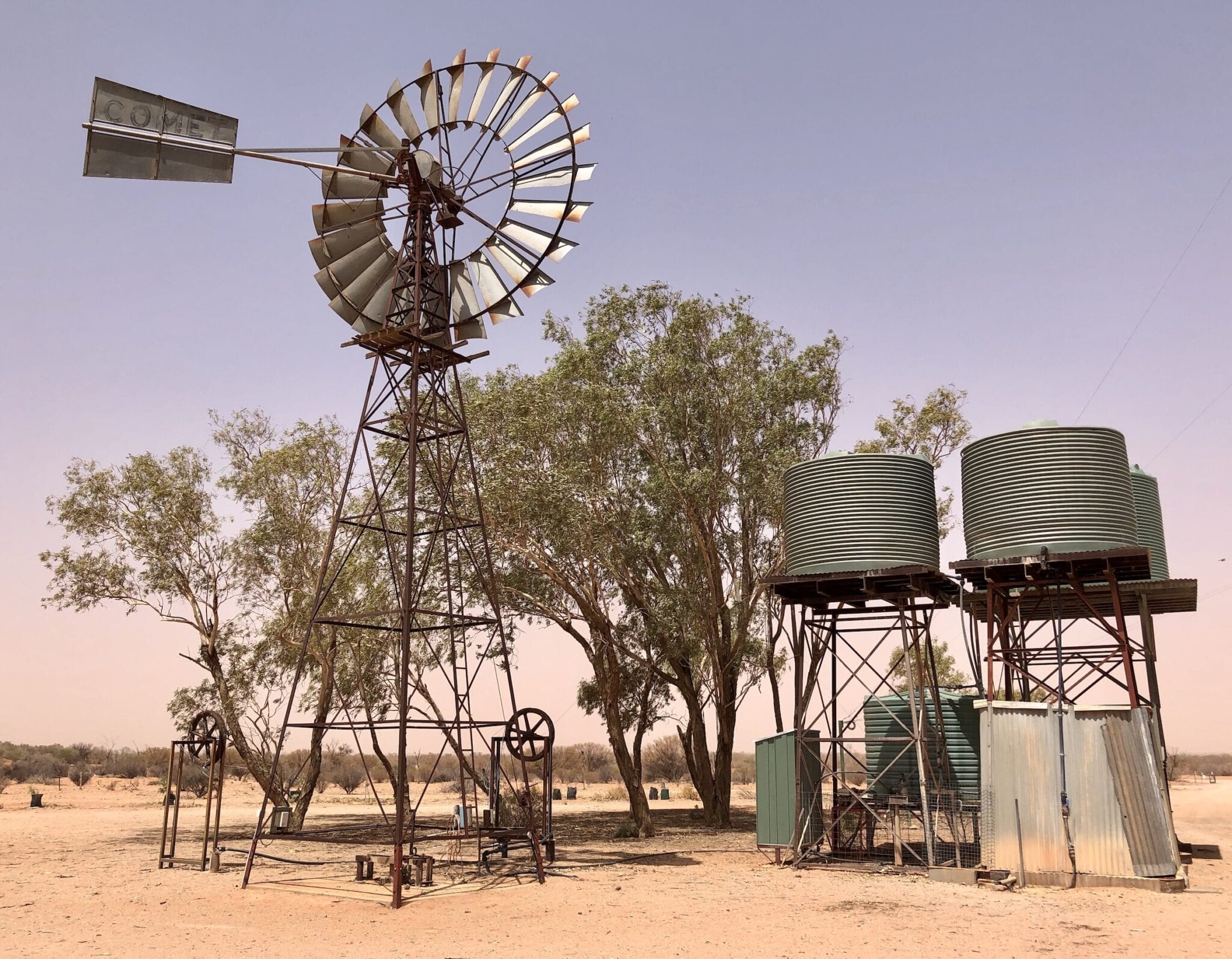 Note: Wild Deserts is a restricted area, not open to the public. We were invited to Wild Deserts for our caretaker role.

If you drive as far north-west as you can in New South Wales, you’ll reach Cameron Corner.

Just before this, you’ll be driving through Wild Deserts on the eastern side of the Strzelecki Desert. Go here for details on what Wild Deserts does and why they’re way out here, in NSW Corner Country.

In summary, they’re creating a sanctuary of sorts… a place to re-introduce a range of small mammals which have become extinct in this region. Over the years they’ve been killed off by feral predators like cats and foxes, plus competition and habitat destruction from rabbits, sheep and cattle.

We’ve previously volunteered at Wild Deserts and have called in a couple of times as well. Bec, Reece, their young daughter Isla and faithful rabbiting dog Peggy live here permanently. This tiny team is in charge of turning ideas into reality.

They asked if we wanted to caretake Wild Deserts in January, so they could have a well-earned break. We took about 5 seconds to say yes!

We’ve never done a caretaker role before. However I was brought up on a sheep and cattle property, plus we’re both pretty practical and able to figure most things out. Another big bonus… we have experience in remote outback areas.

Really the biggest issue in Corner Country during January is coping with the heat.

Daytime temperatures are usually low to mid 40’s and night-time temperatures often don’t fall below 30 deg C. Plus the relentless sun reflecting off the sand can knock you around and sap your energy. You have to be sensible… drink plenty of water, work outside early morning and late afternoon, then retreat under the air conditioner during the hottest part of the day.

Being a caretaker is a big responsibility. After all, you’re responsible for someone’s livelihood. However, there’s a unique aspect to Wild Deserts… an aspect which adds another layer of responsibility.

Wild Deserts has over 50km of specialised fencing, super-expensive and purpose-built. This fencing is vermin and predator-proof, designed to keep rabbits, foxes and cats out.

Two paddocks (exclosures) are fenced off as breeding grounds for when mammals are re-introduced. They’re both roughly diamond-shaped, each about 4km x 5km. Then three wing fences run:

The wing fence forms a triangle with the dog fence and is called the Wild Training Zone.

Re-introduced mammals will be bred in the exclosures then progressively released into the Wild Training Zone. In here, they’ll learn how to avoid predators such as cats, compete with rabbits for food and avoid hazards like traffic on the Cameron Corner Road. Predator numbers will be strictly controlled.

Then in the future, these mammals can be progressively released into the greater Sturt National Park.

So the integrity of these fences is critical.

Reece and Bec (and Peggy the rabbiting dog!) have spent a couple of years meticulously clearing the exclosures of vermin and predators… rabbits, cats, foxes and kangaroos. One small breach in a fence could undo all their hard work. And it would set the mammal re-introduction schedule back significantly.

So it’s vital we check the fences regularly.

You might be wondering why kangaroos are removed as well. After all, they’re native animals. Well, roos shouldn’t be here because there’s no surface water. It’s only after bores were sunk as watering points for stock that roos were able to live here in the Strzelecki Desert.

Unlike a normal outback station, there’s a few jobs unique to Wild Deserts. Like building one-way gates for kangaroos. These simple but ingenious devices allow kangaroos to get out of exclosures and the Wild Training Zone, but won’t let them back in.

As a roo pushes forward, the gate expands to let it escape. Then it springs back to close behind the roo.

One-way kangaroo gates have been around for a long time in various forms. There’s an added degree of difficulty here though. They also have to stop cats and foxes from getting in. So after a great deal of fine-tuning by Reece, he’s come up with a clever solution.

We also venture out at night to conduct spotlight checks. This involves driving slowly along specific roads and tracks, observing and recording any animals seen in the spotlight. The primary purpose is to record kangaroo numbers before the wing fences are completed and the gates closed forever.

And this is where the one-way roo gates come into play. They let the roos out of the Wild Training Zone, but don’t allow them back in.

The spotlight checks are also an opportunity to record any rabbits, cats, dingoes or foxes. Due to the extremely dry conditions, we didn’t see much. Just the occasional kangaroo or rabbit.

As you’d expect, Wild Deserts records lots of data. So there’s plenty of data entry to complete… analysing thousands of images taken from motion-sensor cameras in the field, entering the data from the spotlight checks, bird survey data and so on.

Data entry is ideal work for during the heat of the day, when it’s too hot to venture out.

One other slightly unusual job is keep an eye on Fort Grey campground. This is across the road, about a kilometre from the homestead. The campground is a short walk to the shoreline of an enormous ephemeral lake, Lake Pinaroo.

A couple who live about 30km away (Bodie and Rachel) have the contract to look after the campground. However, they only have to check it once a month in Summer. So we stopped in every few days to check whether any roos had died underneath the BBQ enclosures.

We’ve been surprised to see the occasional traveller camping there.

One group were a family on their way to Townsville. They decided to see Cameron Corner on the way. Probably not my Number 1 destination of choice in January… each to their own I suppose!

Another couple were young German backpackers in a Subaru wagon. They had driven from Brisbane to Birdsville, down Arrabury Road to Innamincka, then to Fort Grey campground via Cameron Corner. Like many German travellers, they were real go-getters. Germans seem to have a strong sense of adventure, determined to get out and see as much as they can despite the heat. They were inspiring to talk to.

As you’d expect, there’s the normal caretaker duties as well. Check the diesel generator, clean the solar panels, keep an eye on the water tanks and fill them from the bore as needed, water the garden, keep the chooks alive in the heat… and keep unprepared tourists alive in the heat!