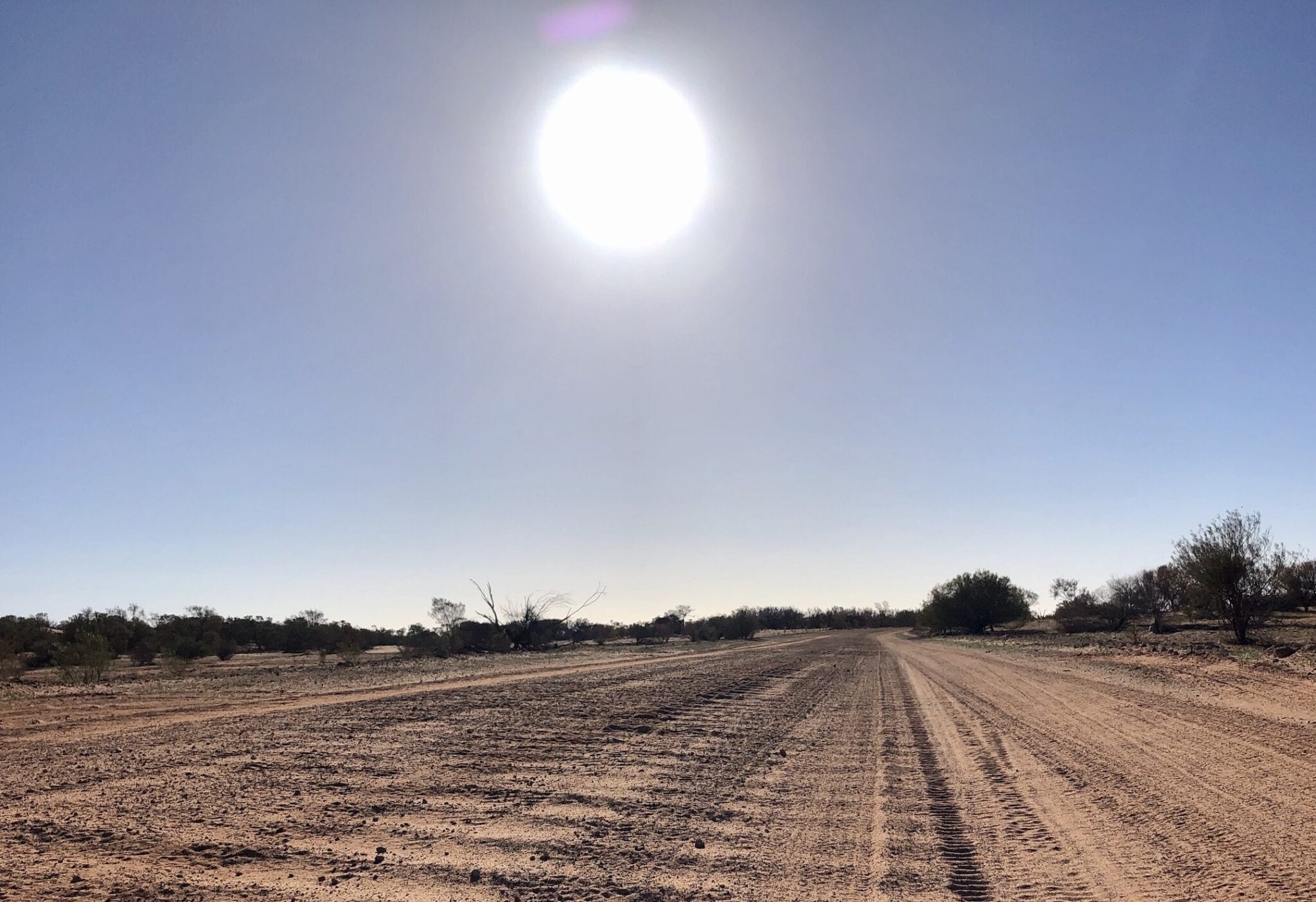 Meet Abdul. He’s a lovely bloke aged about 25… quiet, easy-going and above all, curious. Abdul was sitting at home in Sydney over Christmas. He doesn’t have any family in Australia, so he made a snap decision to see Australia’s outback.

He’s lived in Australia for a couple of years now and has heard so much about the outback.

The thing is, he doesn’t even own a car.

Not a problem. He hires a tiny Toyota Yaris and decides to drive west. And that’s pretty much his plan. Drive west and have a look around. Armed with a small bag of clothes, credit card, some cash and a mobile phone, off he goes.

Free Download:
The 8 Essentials You Need To Live Off-Grid

…and don’t worry, eating raw fish isn’t one of them!

All Good… at First

So Abdul points the mighty Yaris west. Out over the Blue Mountains, through Bathurst, Orange, Wellington and an overnight stop in Dubbo.

His car doesn’t have a GPS, so he bluetooths his phone to the in-car headset and uses Google Maps. He finds a motel using Google Maps and settles in for the night.

Abdul’s impressed by the wide open spaces, but can’t believe how dry it is.

Next day he pushes on… Nyngan, Cobar, Wilcannia and Broken Hill. He’s shocked how far apart these towns are. There’s hundreds of kilometres between some of these places.

By now, Abdul realises Google Maps is useless out here. Once he leaves town, all he gets is a blank screen. No matter, he follows the road west.

And the country becomes more desolate.

“How could anyone live out here?” he wonders. Mile after mile of bare red sand, whirly-whirlies in all directions and just a few sparse bushes.

The fuel’s getting low as he rolls into Cobar. Google Maps has come back to life, so he searches for service stations. The Shell at Cobar pops up. As Abdul steps out to refuel, he’s hit by a hot furnace… a strong nor-wester blowing in from the deserts of Central Australia.

Back in the buzz-box and ever-westward to Broken Hill. Mid-afternoon and it looks like there’s a big storm ahead. A huge reddy-grey cloud stretches across the western horizon all the way from the ground, way up into the sky. Pretty soon he drives straight into a massive dust storm. So much for the rain!

It’s late afternoon by the time Abdul gets to Broken Hill and the fuel is low again. He fills up… it’s even hotter out here! And he can taste the grit from the dust storm. He gets a feed and checks into another motel.

So where to from here? He decides to figure it out in the morning.

Up early and no plan other than to drive and keep exploring. So Abdul decides to go north on the Silver City Highway. “Might as well have a look while I’m here”, he thinks to himself.

And this is where Adbul’s plan comes unstuck.

He thought the country couldn’t possibly be more desolate and forbidding, yet here it is. Bare ranges covered with stones and reefs of rock, dust, sand and heat… all baking under 40+ degree heat.

He passes the tiny settlement of Packsaddle and on towards Tibooburra.

By now Abdul has learned to keep an eye on the fuel gauge. As he approaches Tibooburra, the car shows just over 175km distance to empty. He sees a sign just before Tibooburra, on a dirt road heading North-West. “Next Services 138km”, with a symbol indicating fuel.

So less than 1km south of Tibooburra (where there’s fuel), Abdul takes the road to Cameron Corner… 140km of dirt. Bad idea.

And we’re about to meet Abdul for the first time.

We did jobs around the house at daylight, then disappeared inside under the air conditioner until sunset. It was simply too hot to do much else.

Anyway, the next day we saw a tiny white car go past on the road at about 2pm, heading to Cameron Corner.

We’d seen just about everything go past. Camper vans, utes with roof top tents, camper trailers and plenty of caravans. But when we saw the white car, we decided whoever was driving that tiny car on a rough road like this was completely insane!

So the tiny white car stuck in our minds.

Of course, it was our mate Abdul. He wasn’t too worried about the road, because he simply didn’t know any better. He had no idea what he was doing.

At 4pm we saw the tiny white car coming slowly back. Then it stopped at the entrance gate to Fort Grey. We wondered what was going on.

All we could see was a figure out of the car, pacing around in the hot sun.

We decided this character was in trouble. So we drove down to see what was up. There was no way we were going to walk the few hundred metres over that hot red sand… it was simply too hot.

To say Abdul was relieved is an understatement. His face was a mixture of relief, panic and fear.

Abdul’s first words were, “I’m in trouble. I don’t have any fuel or water”. Uh-oh.

And he was right. The fuel tank was so low, the gauge was trying to push its way out through the bottom of the dashboard.

Luckily I found a 20 litre jerry can of petrol and dumped it in the fuel tank, after checking he had the cash to pay for it. (We’re caretaking, so we couldn’t just give it away).

Then Peta found a big bottle of cold water for him. He had no water at all, nothing.

We gave Abdul instructions on where to get fuel in Tibooburra and where to stay in town overnight.

I was worried about him getting a blowout out or putting a rock through the sump. Then he would be stranded in the heat. So I tried to explain, “If you break down, DO NOT LEAVE THIS CAR. And when someone comes past, wave until they stop for you. If you try to walk, you will die”.

Abdul had a chuckle at the last bit, but stopped when he saw I was serious.

We checked him for dehydration. Surprisingly, he was still okay… just. Our big bottle of cold water would be more than enough to get him back to Tibooburra.

So how did he get into this mess?

Abdul had never been off the East Coast, let alone into Australia’s outback. He had no reference point, no experience of how brutal summer is in the outback.

A few things surprised us, but made sense after we thought about them for a while.

Firstly, why didn’t he try to get fuel and buy water at Cameron Corner? Well, he said the gate was closed. We assumed he meant the gate through the fence encircling the Corner Store. He saw all the campers there, but didn’t want to go through the closed gate.

So he turned around and drove away.

Then we realised what must have happened. Abdul saw the “Next Services 138km” sign at the Tibooburra end of the Cameron Corner Road. He was expecting to see a service station at Cameron Corner… one painted brightly in company colours with an electronic signboard showing fuel prices, a big awning with bowsers underneath.

To Abdul, that’s what a service station looks like.

He had no idea a service station in Australia’s outback is normally nothing more than a single dirty old bowser outside the one shop in town. I’m not having a go at him, he simply didn’t know any different.

So when he reached Cameron Corner, all he saw was a single building with lots of campers. He thought it was a campground.

Then we tried to figure out why he stopped at the front gate at Fort Grey. Why didn’t he drive in? After all, he was in big trouble.

I guess the entrance to Fort Grey homestead is kind of intimidating. “Authorised Access Only” and “No Public Access” signs, plus the name itself. Maybe he thought it was some secret military facility, like a mini Pine Gap!

In fairness, we’ve been past our fair share of unwelcoming mine sites. Places like Telfer Gold Mine where the signage basically implies that unless you’re about to drop dead, go away!

A Lesson for All of Us

We probably learned as much from this as Abdul did. Learning to travel safely though Australia’s outback is like learning to ride a bike. Once you’ve fallen off a few times, you know what to expect. So you’re better prepared next time.

The thing is, Abdul reminded us how much there is to learn about outback travel.

What we take for granted, others don’t have a clue about. You don’t know what you don’t know. Things like:

A simple drive in an unsuitable and unprepared vehicle can easily end in tragedy.

It was sheer luck we were around the Fort Grey homestead when Abdul arrived. If we weren’t there, would he have pushed on? If so, he would have certainly run out of fuel and most likely walked in 40 deg heat on boiling red sand, with no water.

He was already starting to show early stages of dehydration. If he’d have walked, at best he would have collapsed. At worst, he could have easily died.

After all, dehydration causes disorientation. Chances are, he would have wandered off into the sand dunes.

We loved Abdul’s sense of adventure. How many people sit at home on the East Coast at Christmas and think, “I’m going to drive west until I can’t go any further”? I’ll wager not many.

Abdul was no fool. In fact, he was clearly an intelligent person with a sense of adventure.

He just had no idea of what to expect. By the time he realised the seriousness of his situation, it was too late.

If you’re like Abdul and have never been into Australia’s outback, spend some time learning and prepping for your adventure. Don’t ever underestimate the outback.

It’s the most amazingly beautiful place, but is ruthlessly unforgiving to those who don’t give it the respect it deserves.

Footnote: We rang the police in Tibooburra after Abdul left, so they could keep an eye out for him. Thankfully, they rang later to say he’d made it safely to Tibooburra.

For more tips and ideas on Outback Safety and Survival, go here.