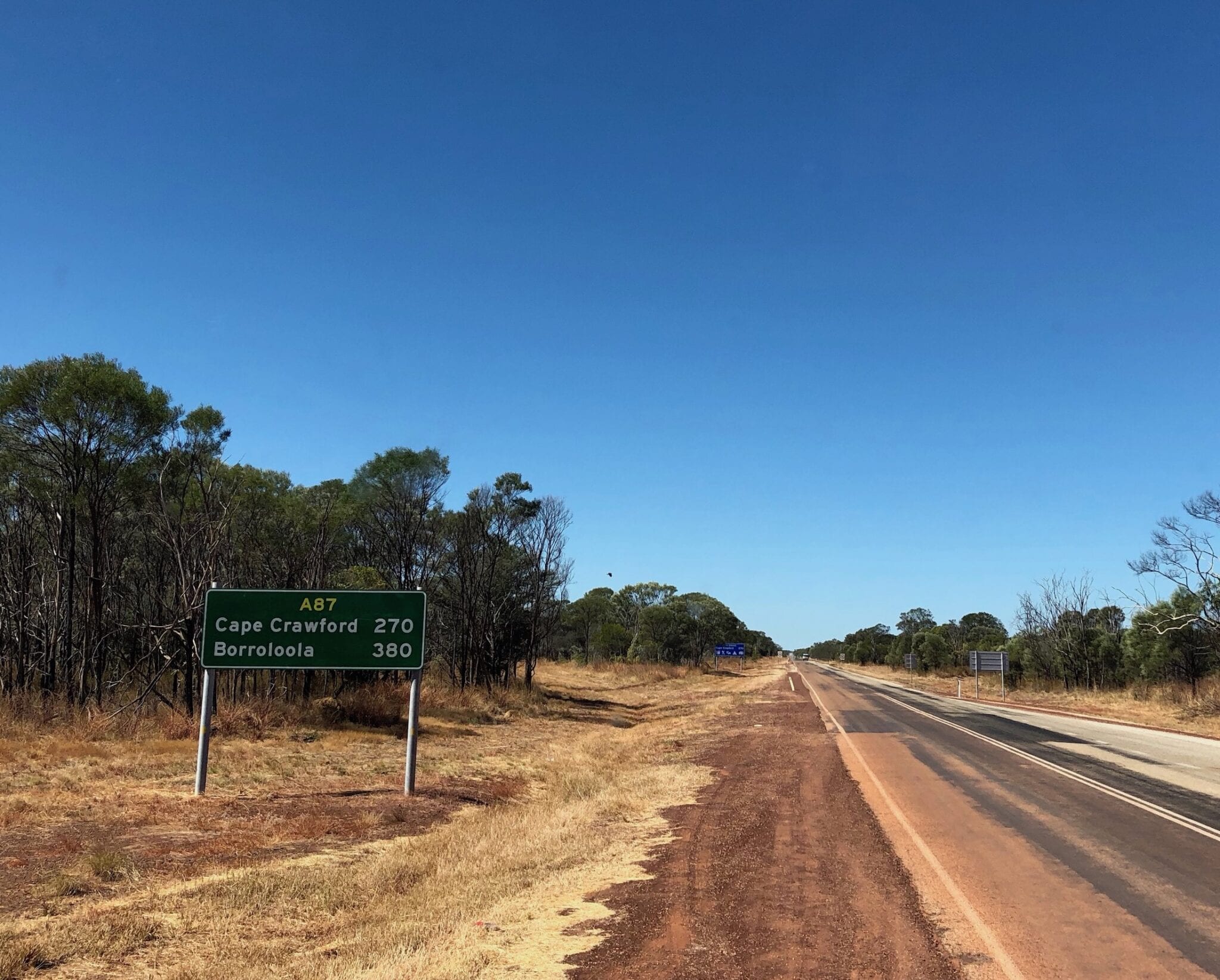 A thin ribbon of tar disappeared into the distance. The truck bounced and bucked over the broken surface like it was determined to leave this rough road and go bush.

Welcome to Highway One… the Carpentaria Highway between Daly Waters and Borroloola!

We were finally driving across the Top, a drive that had eluded us for many years. Rain and wet roads had thwarted our previous attempts, as far back as 2010. This time, we were good to go.

Our day had started early at Leliyn (Edith Falls), north of Katherine in the Northern Territory. After picking up supplies in Katherine, we joined the procession of caravans down the Stuart Highway to the roadhouse at Daly Waters.

A quick stop at the roadhouse for fuel and we pointed the truck east. This is officially National Highway One. Don’t be deceived by the important title though. It’s little more than a single lane, poorly maintained tar road.

Just another in a long list of roads the bankrupt NT Government can’t afford to maintain. Potholes, tramtracks and washouts… yes washouts on a tar road!

We decided to camp the night at Bullwaddy Rest Area. There’s no facilities here, so you have to be self-contained.

Stopping beside a shelter, a mob of curious wasps started invading our space. After deciding this could get ugly, we moved away a safe distance and set up camp. Two vans and motorhome pulled in and luckily for us, provided a distraction for the wasps!

A beautiful cool clear night provided us with a peaceful night of star-gazing. Perfect!

The Cape Without an Ocean

Next morning we rolled into Cape Crawford. This oddly named town is nowhere near the ocean. The story goes that the “cape” refers to the end of the nearby Abner Ranges, while the Crawford part refers to Lindsay Crawford who was a drover.

Cape Crawford is best known for the Heartbreak Hotel. Once a wild frontier pub, it’s a bit quieter now. You can buy fuel there and a few basic supplies.

They also run helicopter flights out of Cape Crawford, over the Lost City. Think Southern Lost City on a larger scale.

We pushed on towards Borroloola, an easy drive through a mix of savannah and jump-up country. The most notable part of this trip is the mining activity. The massive McArthur River silver, lead and zinc mine is a massive open-cut affair.

Pretty soon we arrived at Borroloola.

Onwards to the QLD Border

After Borroloola, the road turns to dirt and you cross lots of creeks and rivers. Some had small quantities of water but most were dry. We saw where an earlier cyclone had flattened thousands of trees east of Seven Emu Homestead turnoff.

The road varied from smooth to horrible corrugations. But all things considered, it wasn’t too bad. The worst part by far was in the rugged range country around Redbank Mine, close to the border.

The terrain also varied widely from tropical looking country covered in palms to dry savannah country. There’s certainly no shortage of photo opportunities along this route!

We had planned to stop for the night at Calvert River. However a bridge is being built over the crossing, so it was more like a construction site than a peaceful riverside camp.

There’s a few places you can visit along here. Snake Lagoon Homestead caters for fishers or you can check out Manangoora Homestead and Seven Emu Homestead. And apart from Calvert River, you can camp at Robinson River Crossing.

Once into Queensland, the road improves out of sight. Hmmm, there’s a sentence I never thought I’d write! There’s a few sections of tar and the dirt sections are in excellent condition.

Next morning we rolled into Hells Gate Roadhouse to get fuel. This is a really friendly place and obviously knows how to cater for tourists. It was packed to the rafters with travellers packing up and heading off.

Hells Gate used to be the cutoff point between “civilisation” and lawlessness. West of Hells Gate was a free for all and your safety couldn’t be guaranteed.

Incredibly, thousands of mainly Chinese miners walked across this way from Palmer River Goldfields in Cape York to Halls Creek. That’s over 2,000km! No one knows how many were murdered, eaten by crocodiles, died of starvation or got lost along the way.

When you see the harshness and difficulty of walking through most of this country, I’m surprised any of them survived the journey.

Leaving Hells Gate and driving east, the road is now all but completely tarred all the way to Burketown.

The Savannah Way from Daly Waters to Borroloola is a popular route for fishers heading to King Ash Bay, north of Borroloola. The road east of Borroloola is more for those seeking an adventurous route across the Top End into Queensland.

Whether you decide to travel via Mataranka and Roper Bar or Daly Waters and Cape Crawford, you won’t be disappointed. Either trip is simply spectacular.

You really are in remote country up here.

The Savannah Way between Daly Waters and Hells Gate Roadhouse is on Alawa, Ngandji, Binbinga and Garawa Country.

For more articles on the Savannah Way, go here.