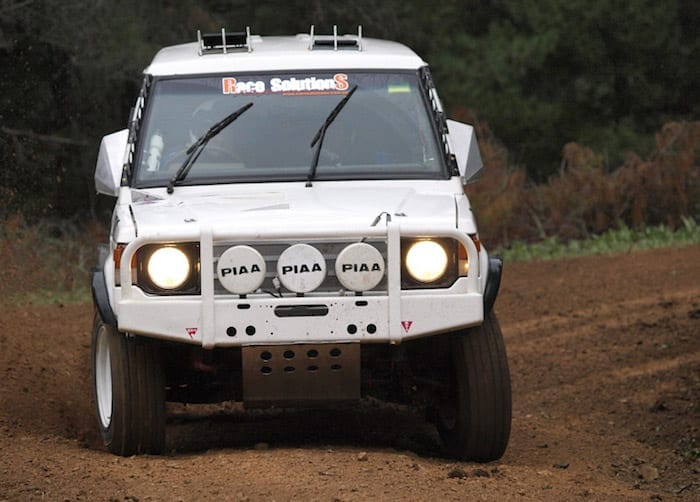 As you’ve probably guessed, Dave’s off-roading exploits didn’t end when he wrote off the Pajero ute. In fact, the best was yet to come.

With the Pajero ute written off, Dave concentrated on his business. Building another off-road vehicle was not an option – lack of time and money saw to that. For now, he was content to be part of the Denham’s Service Crew.

All this changed in 2009. He was offered a 1991 Pajero wagon by one of the racing fraternity.

Again, this was no ordinary Pajero. It was originally built by Ralliart as a Production Class race car and competed in the Australasian Safari (formerly Wynns Safari). It was driven as a road car for many years afterwards.

This car was a hybrid from the factory. At the time, Pajeros had leaf springs in the rear. However, this one had coils. It was possibly doubling as a test vehicle in disguise.

Even better, the same person also gave Dave a factory standard Pajero, which he stripped and used for spare parts.

Time For A Transplant

With the help of his Dad Kevin, Dave transformed the Paj into a really neat vehicle.

From the outside, the Paj looked pretty much standard. However, modifications were actually extensive:

The result was a super-tidy race car… built on a shoestring budget. Enjoy the photos!

Next time: The Gen 1 Pajero’s Achilles Heel. Every car has a weakness.