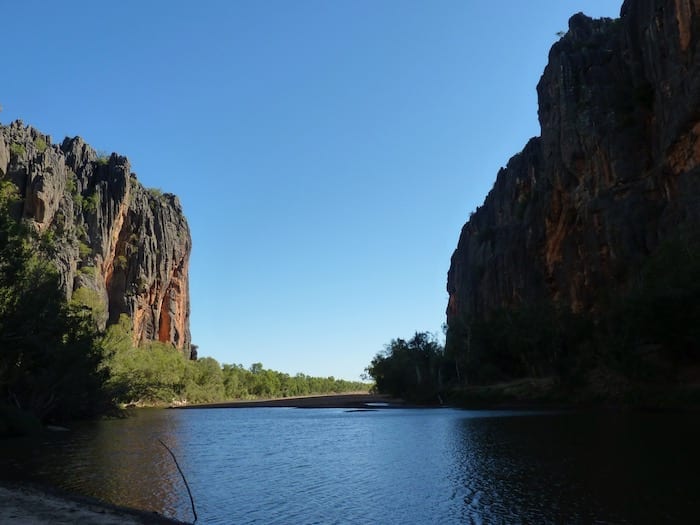 Camping In The Shadows Of A Coral Reef

The Long Wait Is Over

If you’ve ever longed to travel through the Kimberleys, you’ll be pretty excited when you finally turn onto the Gibb River Road. It’s a bit surreal – you’re finally here! The first 50 km or so is tar, then it’s dirt – woohoo!

First stop was Windjana Gorge. The Lennard River has cut through the Napier mountain range to form a spectacular gorge. This is a great spot for viewing freshwater crocodiles. They just love lazing in the warm pools and sunning themselves on the muddy banks.

Freshies are quite a bit more “user-friendly”  than saltwater crocodiles. Simply put, freshies don’t eat people! But don’t corner them – like any creature, if freshies feel threatened then they’ll fight back.

A Coral Reef On Land – What’s The Story?

The mountain range is unlike any mountain range you’ll ever see. It was actually a coral reef! Originally 2km high and over 350 million years old, it stretched all the way north into the ocean then looped back around to the coast near the WA/NT border. It would have been huge.

Consequently, the campground is unique – and quite beautiful. Watching the sun rise over an ancient coral reef is not something you’ll experience every day!

While we’re talking about the campground – you’ll be pleasantly surprised with the flushing toilets and hot showers. We certainly didn’t expect such luxuries.

This is the area where Jandamarra used to roam. This was his mob’s country – he was a Bunuba man. For more on Jandamarra’s extraordinary life, go here.

We met a young lady called Anna who was travelling Australia solo, in a Holden Commodore station wagon. She is Dutch/Irish – family moved from Holland to Ireland as a child. She had been working on a cattle station as a stockwoman near Camooweal QLD up until recently – 1.8 million acres and around 35,000 beef cattle.

Prior to coming to Oz, Anna had travelled through many countries in the world and consequently had a very open mind and some amazing experiences. She was great company and we all enjoyed travelling with her.

Tunnel Creek – Up Close And Personal With Freshwater Crocs

We took Anna down to Tunnel Creek with us (rough road, her car wouldn’t have made it). Tunnel Creek flows through the mountain range and has formed quite a large cave. We did the 750 m return walk through the tunnel.

There were lots of bats inside, both large and small. Also, we had to wade through the water in places which was fun – until we saw a set of red freshwater crocodile eyes in the torch light. So after that, wading was a bit less fun and a little more scary!

Tunnel Creek was Jandamarra’s hideout and the place where he was eventually shot. Would have made a great hideout – concealed entrance, pitch black caves, lots of little nooks and crannies inside and a few secret exits where the roof has collapsed.

A Reminder Of Our Brutal Past

On the way back to our campsite, we visited the ruins of the Lillimulura police outpost. Excellent interpretive signs present a short history of this place and of Jandamarra’s life. Refreshingly, no attempt has been made to whitewash our colonial history.

This area was a hot spot in the colonial wars. Police were posted here to root out Aboriginal people and either kill them or chain them together and march them into Derby. In return, police were paid a bounty for each person captured.

Jandamarra shot Constable Richardson here and freed his own family.

It would have been a frightening place to be posted – in the middle of nowhere and backing onto the mountain range. I can’t imagine sleep would have come very easily – there were lots of people out there just waiting to kill you…

Windjana Gorge and surrounds are truly spectacular. What an excellent introduction to the Kimberleys!

Next time: We explore Bell’s Gorge and Silent Grove.