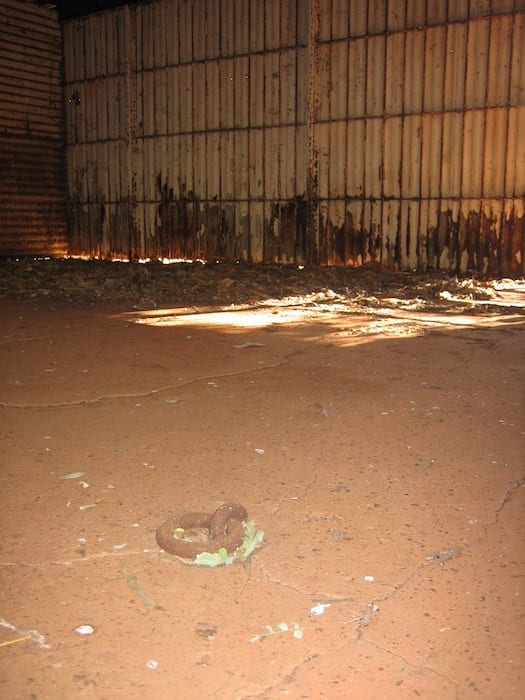 Living in a Cage, Chained to the Floor. How Could We Do This?

Last time, we discovered the horrific story of how Aboriginal people were rounded up like feral animals and marched to Derby Gaol. Go here if you missed it.

The old Derby gaol is horrendous. Images of mediaeval punishment chambers spring to mind. How we as a nation could do this to our fellow man defies belief. And it’s not something from hundreds of years ago. This hell-hole opened in 1906 and only closed in 1975.

Last time we learnt why so many Aboriginal prisoners ended up in Derby Gaol. Most of them were arrested on suspicion of killing cattle for food.

Once at Derby prison, they were chained to eye bolts set into the concrete floor then left there for up to 2 years without any form of sanitation or bedding. The “prison” was nothing more than a steel cage with a corrugated iron roof.

At one stage there were 102 people in 2 cells, each of which is no larger than an average sized main bedroom. I know times were a lot different back then, but how man could do this to their fellow man is beyond my comprehension. The staggering thing is, this prison was used up until 1975.

There would be an outcry if someone locked an animal in one of these cages – and rightly so.

Conditions were barbaric. Men and women shared these cages, sleeping on concrete, sharing a single pan toilet and suffering exposure to both the oppressive summer heat and the chilly winter nights. Death due to disease and influenza was rife.

And some people still wonder why Aboriginal people refuse to forget the past and move on. Remember, this gaol is not some distant memory from hundreds of years ago. This horror was happening in our – or at least our parents’ – lifetime.

Aboriginal people were resisting invasion of their lands by spearing cattle. Eventually Jandamarra was ordered to track his own family. They were subsequently chained together and marched to a police outpost in the Kimberley.

The pressure was unbearable for Jandamarra… he was caught between two worlds.

One of the prisoners was his uncle Ellemarra, a senior elder who issued Jandamarra with an ultimatum. Either kill Richardson and free his family or be cast out from his own mob. He chose the former.

Jandamarra became a freedom fighter and was greatly feared by the whites. He organised an armed insurrection with a plan to drive the whites out of the Kimberley. Eventually he was tracked to Tunnel Creek and ironically was shot by another native tracker at the entrance to Tunnel Creek.

A Challenge for The Armchair Experts

We have all heard statistics on incarceration rates amongst Aboriginal people and unfortunately too many whitefellas have strong opinions on how to “fix the problem”. Mostly these words of “wisdom” are based on nothing more than what they’ve heard from other people or seen on television.

But I defy every one of these “experts” to stand in front of Old Derby Gaol and repeat their blather about how the blackfella just needs to get over himself and move on.

This place symbolises all the evil, barbaric acts perpetrated by the whitefella against the blackfella.

It is pure evil. And it makes me very angry. And I’m a whitefella, with no connection to this land I stand on.

If this place doesn’t make you stop and think, then you’re beyond redemption.

Derby is on Nyikina Country.