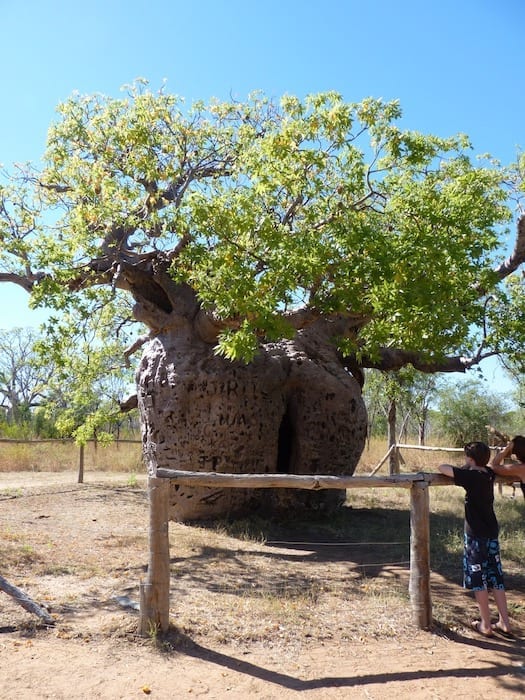 Just south of Derby in Western Australia is an ancient boab tree. It sits out on its own, surrounded by a fence. Apparently this boab is over 1,500 years old and is reputedly the famous “boab prison tree”.

Boabs are generally hollow and this one is no exception. What is unusual is its size – this boab is enormous.

The story goes like this. In the 1890s, Aboriginal prisoners were locked in this tree overnight, in transit from the Kimberley to Derby.

This is simply not true.

The truth is, in the 1940s an artist painted a prison tree located in Wyndham – a “mere” 900-odd kilometres away! A newspaper wrongly attributed the painting to Derby and the myth grew from there.

Of course, the citizens of Derby aren’t exactly falling over themselves to set the record straight. After all, the prison boab tree is a tourist attraction. Fair enough.

And there is just the slightest smidgen of truth in the myth. You see, Aboriginal prisoners were chained up overnight in this immediate area. They were in transit from the Kimberley to the Derby Gaol. So a line of chained prisoners might be unchained from a horse then chained to a tree during an overnight stop.

What’s been forgotten is the significance of boabs to Aboriginal people. Many boabs were used as burial sites, presumably because they are often hollow. This particular tree was no exception. Apparently it contained many bones, but sadly these were removed (stolen) over time.

Genocide By Any Other Name

So who were these Aboriginal prisoners… what had they done… and why were there so many of them?

From the 1890s through to the 1920s, Aboriginal people were hunted down and killed in the Kimberley. Confronting but true.

To the colonialists, the Kimberley was full of opportunities to graze cattle in big numbers over vast areas. In somewhat of a land grab, pastoralists from the southern states drove huge mobs of cattle north-west in a race to claim the last frontier available in Australia.

But the people who had been living in the Kimberley for more than 40,000 years weren’t exactly agreeable to the whitefellas’ plans. They resisted and fought back. Wouldn’t you?

So the First Nations people had to be “pacified”.

Numerous methods were used to “pacify” so-called troublemakers. Officials turned a blind eye to massacres or even actively encouraged the purging of Aboriginal people from the Kimberley.

Of all the sickening ways to eliminate Aboriginal people from the Kimberley, one stands out from the rest.

With a culture of sharing food in hard times, the obvious solution was to kill cattle for food. No more than they needed for survival – just enough to get by. This was their way and had been for thousands of years.

Over time, the Aboriginal people decided it was time to fight back. They took to spearing cattle and the human death toll on both sides began to rise. The situation spiralled out of control and the final outcome was inevitable.

In response, the government flooded the Kimberley with police. Their role was to track down and arrest people who were killing cattle.

What a perfect opportunity to simply round up Aboriginal men and remove them. Two birds killed with one stone – remove cattle-killers and simultaneously remove Aboriginal men who might fight in the frontier war raging across the Kimberley.

But perhaps the sickest part of this sad story is that the police were being paid per prisoner. Each prisoner added to their bonus. The result? Catch the young, the women, the old people… chain them together and march them to Derby.

So these people were rounded up like feral animals, forced to wear steel collars, chained together by their steel collars in groups of 20 to 30, chained to a horse and walked hundreds of kilometres to Derby Gaol.

But the worst was yet to come…

Next time: Derby Gaol – chained to the floor like dogs.

The Boab Prison Tree is on Nyikina Country.