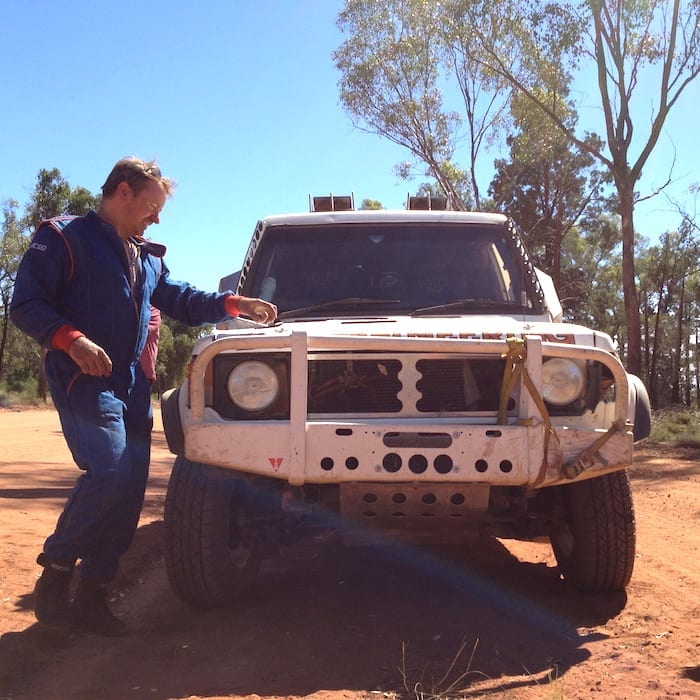 Last time, Dave built an Gen 1 Pajero race car from an ex-Ralliart Production Car. Go here if you missed it.

You won’t be surprised to learn that the old Pajero was a reliable car.

With a couple of Condo 750 events and several AMSAG forest rallies under its belt, the old Paj just kept on going.

Dave and his navigator Scotty were in some rough country. They hit a huge gutter, became airborne, rolled over and slammed nose-first into a bank, about 40km into a 150km stage. A fellow competitor dragged them back onto their wheels.

Dave checked it out and decided they could keep going. Trouble was, the front wheels were pointing in different directions! A quick “wheel alignment” and they were moving again.

But it was not to be. The Old Girl just wouldn’t handle… no surprises there! So they pulled out of the stage and drove 80km back into Condobolin. A tell-tale trail of black rubber left on the road – all the way back to town – proved toe-out was about 30 degrees more than it should have been!

Good news though. We worked on it until about 3am and had it ready to race the next day. Dave and Scotty finished the race – a massive achievement.

Body-on-chassis Pajeros have an inherent front-end weakness. Under normal driving conditions, it’s not an issue.

But with constant pounding at high speed, the upper control arm mounts bend. The result? Huge amounts of negative camber – the tops of the wheels tilt inwards.

Further, the weakest part of the chassis seems to be right under the firewall. The chassis rails try to twist in at the top.

The solution? Well, the chassis can be plated. This stiffens it, but doesn’t completely prevent twisting. There is simply no practical way to brace the chassis across the vehicle… there’s no room.

The upper control arms are another story. Due to lack of space, no one has really found a solution… that we know of, anyway. This was a known problem in the 1990s, when the fast boys were pushing Pajeros past their limits. If a simple solution existed, they would have known about it.

So the answer was to have a box of spare upper control arms and mounts. Many lunchtime services have been spent replacing these.

Next time: “Retro Pajero”. Dave’s mixes it up. Just because he can!