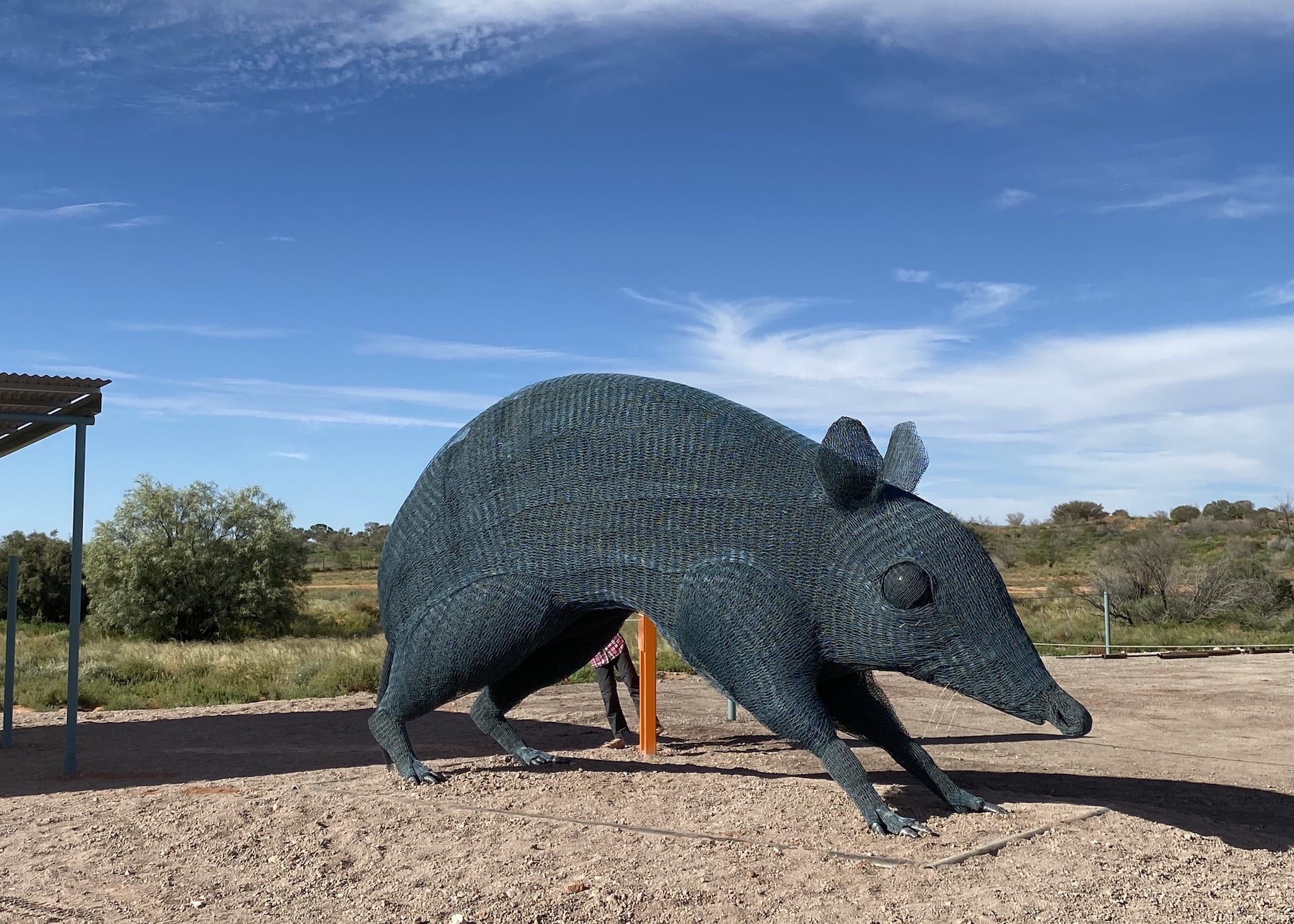 If you’re travelling between Tibooburra and Cameron Corner in New South Wales Corner Country, you’re going to be treated to a unique sight… three amazing wire sculptures – the Big Quoll, the Big Bandicoot and the Big Bilby!

So where did they come from, why are they here and what’s the background story?

The three wire sculptures each represent a marsupial species which has become extinct in the region:

They are but a tiny representation of the creatures which have become extinct since white man “improved” the land.

Feral predators, hard-hoofed livestock, over-grazing and the cessation of Aboriginal land management practices has led to the mass extinction of countless species in this region… and indeed across the country.

Few people realise Australia leads the world in the extinction rate of native mammals. It’s a sad reflection of our poor land management practices since colonisation.

However, the Wild Deserts project is re-introducing these three species (and others) to the region. As we explained in this article about Wild Deserts, they have two large predator-proof exclosures (fenced areas with specially-designed fences to exclude predators) and what’s called a Wild Training Zone.

The aim is to re-introduce marsupials which have become extinct since white man arrived, then teach them to live with feral predators like cats and foxes in the Wild Training Zone. The ultimate goal is for these marsupials to once again thrive in the greater Sturt National Park region.

However, one step at a time… that goal is a fair way off yet!

Coincidentally, there’s another project happening in NSW Corner Country. It’s called Sturt’s Steps. This project aims to open a tourist drive and associated infrastructure based around Charles Sturt’s expedition into the outback in 1844-5.

The route shown above loosely follows Sturt’s route as he travelled through the north-western corner of New South Wales. It includes the drive out to Cameron Corner, which is at the corner of NSW, SA and QLD.

The Sturt’s Steps project provided funding to Wild Deserts for the commissioning of an animal sculpture or sculptures.

Ultimately they’ll be part of a series of sculptures along the Sturt’s Steps route. These three represent the good work that’s happening out here in a remote corner of New South Wales.

The three wire sculptures are all made from wire netting… offcuts from the extensive fencing done within the Wild Deserts project area. It’s a neat touch. The very netting that will help protect and nurture these re-introduced species, is also being used to increase awareness of these incredible creatures.

But the absolute standout in our eyes, is the much larger bandicoot sculpture at the Wild Deserts viewing area.

The bandicoot is a marsupial species that Sturt recorded in his journals. The First Nations people call them Talpero. So it’s significant to see the broken link between bandicoots and this region being re-established.

This wire sculpture was created by Brian Campbell of Coonamble NSW. The attention to detail has to be seen to be truly appreciated… even down to its wire whiskers and reflective eyes made from the two halves of a water trough float!

The way these artists have woven, stretched, linked and shaped the wire netting is incredibly clever. It must have taken thousands of hours of painstaking labour.

When you stop at the bandicoot sculpture, take the time to walk up to the viewing platform. You’ll be surprised at the great view from up there. And the sunrise and sunset views are fantastic!

These three sculptures are valuable additions to Sturt National Park. They represent what’s been lost forever… countless species of mammals wiped out of existence in the name of “progress”.

They also represent the past and hopefully the future. Projects like Wild Deserts are beacons of light at the end of a very dark tunnel. What they are achieving is so very important to our natural world.

Let the sculptures serve as a reminder of how this land once was… and how it could still be if only we learnt to look after it.