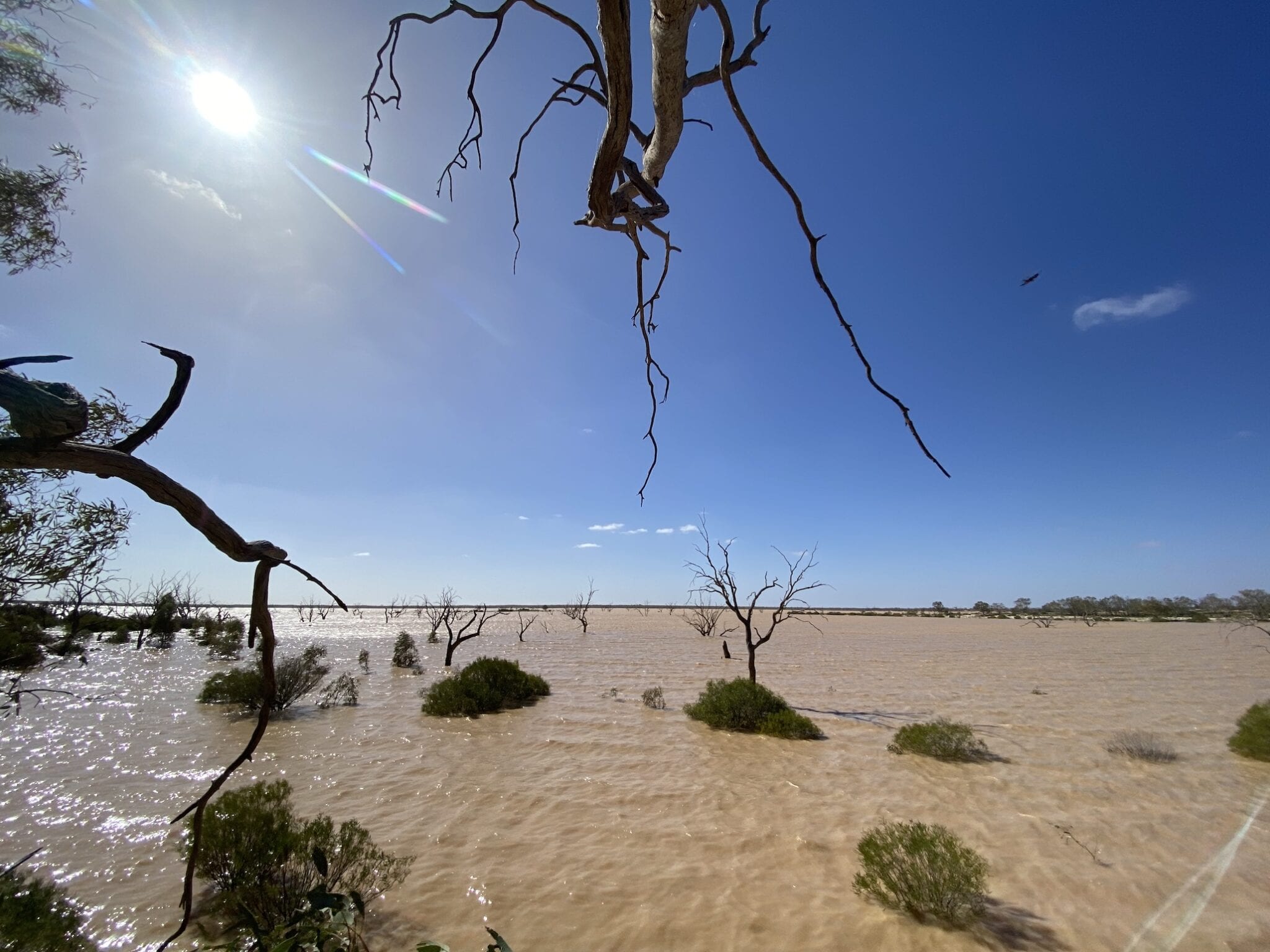 Not many people realise the South Australian Strzelecki Desert crosses the NSW border and reaches into the far western corner. Yes, NSW does have desert country!

And like many desert lakes, Lake Pinaroo only fills after big rain events.

East of Lake Pinaroo towards Tibooburra, the land slopes gently westward from the ancient Grey Ranges. Much of this country is covered in gibbers. When it rains, this huge catchment (over 75,000 hectares) flows lazily westward following Frome Creek for about 50km.

On its way, it fills the vast Frome Swamp before coming to an abrupt halt up against a complex network of sand dunes (zoom in on the map above and you’ll see what I mean). In scientific terms, it’s a terminal lake… meaning the flow of water terminates here.

In this basin, water collects to form the shallow waters of Lake Pinaroo.

In theory, Lake Pinaroo is in the Lake Eyre catchment. However, the topography means it can never flow into Lake Eyre.

During massive rain events like 1956 and 1974, the water backs up from Lake Pinaroo and fills Frome Swamp. Marker posts by the roadside at Frome Swamp show where the 1974 level was.

It’s almost impossible to imagine such an immense amount of water collecting in one spot. When full, it covers about 800 hectares, over 7 km from end to end and 3 – 4 metres deep in the deepest parts.

In early 2021, 100mm of rain fell in the Lake Pinaroo catchment. Within days, the lake began to fill after being dry for nearly 10 years.

Before we move on, let’s put that 100mm downpour in context.

Just a couple of years earlier, we had walked across the vast Lake Pinaroo lakebed and tried to imagine how different this place would be when full.

Well, now we’ve seen it with our own eyes. And let me tell you, it’s an extraordinary sight.

Seeing Lake Pinaroo filled with water, it’s difficult to remember how very different this region was just a couple of years earlier.

We had seen dry tanks (dams) in Sturt National Park surrounded by the carcasses of over 200 dead kangaroos. They had died of thirst and starvation… a horrible way to die.

Most of the mulga trees were either dead or dying. You know things are bad when the mulga starts dying.

And we witnessed starving birds literally dropping out of trees in savage summer heat, while we were caretaking at Fort Grey Homestead in early 2020.

We watched giant whirly-whirlies march across the lakebed from Fort Grey Homestead every day. They’d start in the red sand country then turn white as they picked up the white sand and clay from the lakebed, then whip it hundreds of metres into the air.

There’s water everywhere! Lake Pinaroo filled very quickly. And the good news is, it’ll stick around for at least a couple of years.

The country is transformed. Just add water, as the saying goes…

Swimming in The Lake

On the hot summer days during caretaking at Fort Grey, Peta and I had a standing joke about how we should go for a swim in Lake Pinaroo to cool down.

However, we never expected to actually do it!

But here was our chance at last. It’s an opportunity we just couldn’t miss. And what an incredible experience.

Standing on the shoreline, you stand there in awe of this amazing sight.

But something doesn’t seem quite right, your senses are confused. You’re in sand dune country… in the Strzelecki Desert, with those familiar dunes and the usual vegetation trying its best to pierce your skin with some evil burry torture device.

Yet you’re on the edge of a lake.

The water laps at your feet. It’s cloudy, really cloudy (the sediment takes time to settle out of the water and drift down to the lakebed).

Hardy desert scrub struggles to keep its head above water close to the shoreline. And you can’t help but wonder how many burrs and sharp mulga sticks you’re going to step on as you walk in!

You wade out carefully. Below the warm top layer is a wall of icy-cold water.

The lakebed is soft but not too deep like some inland rivers are. After checking there’s no coolibah tree branches in front, you glide in.

It’s bloody cold! But what an experience.

You ignore the cold and lie back, taking it all in. You listen to the thousands of waterbirds going about their day. You look at the stunning reflections of the dead coolibahs (drowned by the 1974 flood) on the water.

A raucous bunch of corellas break the serenity, closely followed by a mob of galahs wheeling down to the water’s edge.

You expect the corellas, galahs, ravens, falcons and crested pigeons. But the ducks, native hens, egrets… they’re water birds. You simply don’t expect to see them out here. I imagine it would be a birdwatcher’s paradise!

In fact, Lake Pinaroo is a RAMSAR Site of Significance. This means it’s a wetland of international importance.

This place really is special. And there’s only one thing better than swimming in the lake… and that’s kayaking.

Once you get onto the water, the size of this lake starts to sink in. From the shore, fingers of sand dunes push into the lake. So it’s difficult to get a feel for the scale of Lake Pinaroo from the shore. However when you’re clear of these, the lake proper opens up. It’s pretty big!

The dead trees form beautiful reflections on the water. And they serve another vital purpose. Their hollows are critical nesting hollows for parrots… Bourke’s parrots, galahs, corellas and so on.

As you drift silently around, you’ll be surrounded by all sorts of birds. They seem to feel less threatened by a kayak, so you get to see them close up.

You have to pinch yourself to remember you’re actually kayaking in a desert. It’s one of the best feelings… paddling across a lake, yet you’re surrounded by sand dunes.

Just when we thought our Lake Pinaroo experience couldn’t get any better… well, it did!

Full Moon on The Lake

Our trip coincided with a full moon. So off we went, trekking down the path from the campground to watch the moon rise.

What an incredible sight. A dark orange ball started to appear beyond the far shoreline until it rose and threw a blood-orange reflection across the water.

That is no doubt the best moonrise I’ve ever seen. It actually made Broome’s famous Staircase to the Moon look average.

If you get a chance to see Lake Pinaroo with water in it, grab the opportunity with both hands. It’s such a rare sight in this arid country.

After seeing this region gasping for any drops of water it could get, the way this region transforms after rain is unbelievable. Birds, mammals, reptiles, even frogs… they know this is their big chance to breed and perpetuate their genes.

Trees, bushes and grasses flower and pollenate, dropping seeds into the sand for the next rain event. Lichens grow on every damp surface across the lake, having waited over ten years for their opportunity.

The desert explodes with life. It’s an extraordinary thing to witness.

P.S. Do you want more about Fort Grey Campground and Lake Pinaroo in general? Then go here for all the information you need on visiting and staying at Lake Pinaroo, in Sturt National Park.