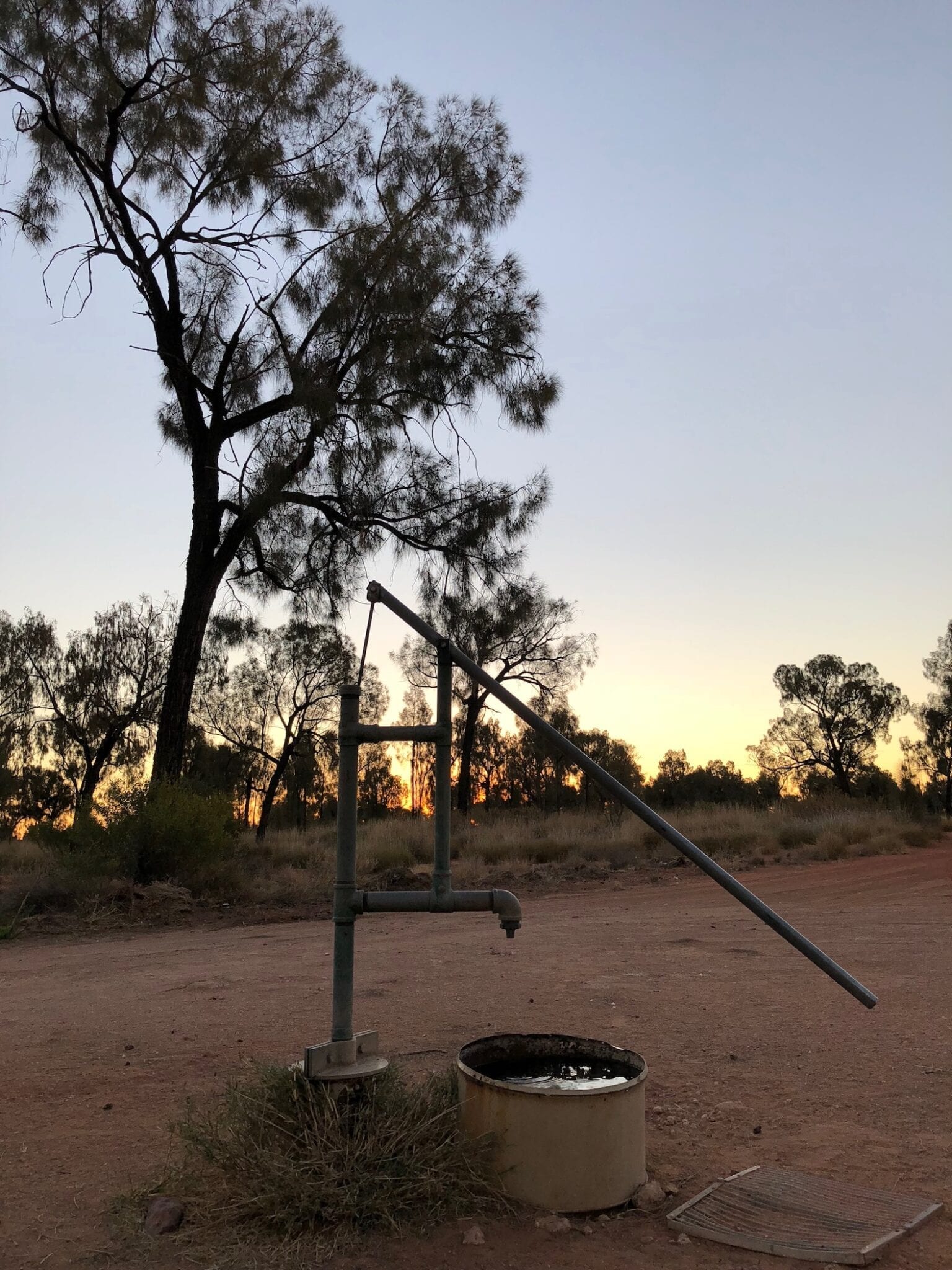 A Trek Across The Gibson Desert – The Gary Junction Road

Imagine this landscape. A red ribbon of sandy road disappearing into the distance. To your right is a sand dune running parallel to and right at the edge of the road, covered in vegetation.

To your left is a field of white spinifex, swaying in the wind. A carpet of light blue bushes break the monotony of the spinifex, with the occasional purple one thrown in for good measure.

And straight ahead in the distance lies an ancient mountain range.

Once grand and formidable, this range has been beaten down by over 2 billion years of wind, rain and heat. Now it’s barely taller than a sand dune.

It still dominates the landscape though.

Impossibly dark red rock veins ripple along the range… giant chucks of rock fractured by over 2 billion years worth of scorching hot days and freezing nights.

Sound too good to be true? It’s not. Welcome to the Gary Junction Road!

The Gary Junction Road was built in 1960 by Len Beadell and his road crew. Len prided himself on building straight roads. In fact, he called his crew the Gunbarrel Construction Party.

However, the Gary Junction Road thwarted his plans. He had to duck and weave around numerous mountain ranges and endless sand dunes that look like they were designed by a mad man.

You see, sand dunes normally run at right angles to the prevailing winds. But out here, they’ve formed seemingly at random. Perhaps the ever-changing wind direction is the cause. Regardless, they’re certainly not parallel.

The road starts north-west of Alice Springs, off the Tanami Road. It runs west into the Gibson Desert for 860km until meeting the Gary Highway in Western Australia, at Gary Junction.

Now Gary Junction is just west of the Canning Stock Route and the nearest town is Marble Bar, way up in the north-west of WA. By now you’re probably realising this road is remote, really remote.

Also, be aware the total distance from Alice Springs to Marble Bar is 1,690km. So once you reach Gary Junction, you still have a long drive to the nearest town.

An Easier Drive You’ll Not Find…

The Gary Junction Road is different.

It’s a well-formed road and three or four cars wide in most places. Why? Well it’s a service road for several communities. Papunya, Kintore and Kiwirrkurra for example. All of these communities rely on supplies and access to Alice Springs.

Be careful though. Of course there are corrugations, however you can easily get up speed and get on top of them.

In WA after Kiwirrkurra, you’ll strike sections of soft sand in the dune country. However they’re easy to get through in a 4WD. Personally I’m not a fan of sand driving. However these didn’t bother me at all. And the best part, no corrugations in the sandy sections!

You’re on Your Own

We love solitude. We love camping in the middle of nowhere with no one else around. If this is what you’re after, then the Gary Junction Road fits the bill.

After Kintore (50km east of the NT/WA border) we saw one group of travellers and one car which was “local” traffic. Perfect!

The flip side of course is lack of help if you run into trouble. Carry a sat phone or EPIRB (or PLB), just in case. You really are a long way from anywhere on this road. Carry enough food and water for four or five extra days, just in case something goes wrong.

It’s difficult to know where to start. One surprise is the extent of the mountain ranges out here. We drove through the West Macdonnell Ranges on Larapinta Drive. After passing Glen Helen, we turned right onto Haast’s Bluff/Papunya Road.

This took us to the Gary Junction Road, 89km after it starts at the Tanami Road.

Haast’s Bluff and the adjoining ranges are spectacular. The Bluff juts out towards the road, like it’s challenging you to drive past. Turning left onto Gary Junction Road, mountains keep you company until well over the WA border.

The absolute standout is Mt Liebig. Think of a giant rooster comb painted light grey. Then slice up several massive slabs of rock and stack them against one edge of the comb, all in a row. Take every shade of grey through to white, add this to the vista and you’ll have Mt Liebig.

It’s so unusual that it doesn’t look real.

Flat-topped mesas, ancient hills streaked with red reefs and even just giant piles of stones. These are but some of the variety you’ll see along the road. Add vegetation of all colours, some flowering bright yellow, others bright blue or purple plus oceans of white spinifex. Gums, bloodwood trees, desert oaks, tough mulga shrubs.

And of course, red sand dunes. Some dunes stretched for tens of kilometres with the road following in the valley between the dunes, floating in an ocean of spinifex.

This would have to be the most incredibly beautiful desert drive imaginable.

Just across the border into WA, Buck Hills stick out like a sore thumb. In behind the hill nearest the road is an exceptional camping spot.

We camped between two hills and watched the setting sun transform the sun-bleached hills into the most striking colours imaginable. Then as the sun rose next morning, it was perfectly framed between the two hills. Black silhouetted hills, deep red sky… wow!

Jupiter Well is another highlight. While the campsite is nothing particularly special, the well is a reminder that water is out here… if you know where to look.

The original well was dug by a National Mapping party. They were surveying this country in 1961, just one year after The Gunbarrel Construction Party had pushed the track through.

The Natmap party had to ship water 480km from Mt Liebig by truck. They were based in this area for months, so they decided to sink a well.

The original well is about 200m from the campsite and is worth a look.

It’s easy to forget how difficult the original track would have been to negotiate. A single grader blade width wide, you’d be struggling through deep sand. And with the winds out here, many parts of the track would have quickly disappeared in sand drifts.

Even now, stretches of the Gary Junction Road are soft sand. Clearly the sand is so deep that it’s virtually impossible to build a firm base.

Spare a thought for the people who rely on this road as their lifeline to the outside world.

Speaking of people, all the Aboriginal communities we called into were friendly and welcoming. We had a yarn to a few people and gained just the tiniest insight into how they live day to day.

For example, the mail plane comes twice weekly and they can book a flight to Alice Springs. This would have to be more appealing than driving 600+km… and cheaper. The supplies truck goes through once a week, bringing much-needed groceries.

In one community, an old bloke asked if we were here to fix the telephones. When we told him we were just getting fuel, he simply shrugged and gave a wistful grin. Clearly they’re used to waiting!

This is a story unto itself. Go here for more information on possible campsites on the Gary Junction Road.

For more information on permits, fuel and supplies, go here.

The Gary Junction Road is one of the best drives you can do in this country.

We had few expectations and little idea of the variety. The country is constantly changing, sometimes suddenly. The road was good, the people friendly and the scenery simply stunning.

This is a must-do desert drive.

P.S. Once you reach Gary Junction, you might be wondering “Where to now?”. Join us as we continue on to Marble Bar, and a new adventure.