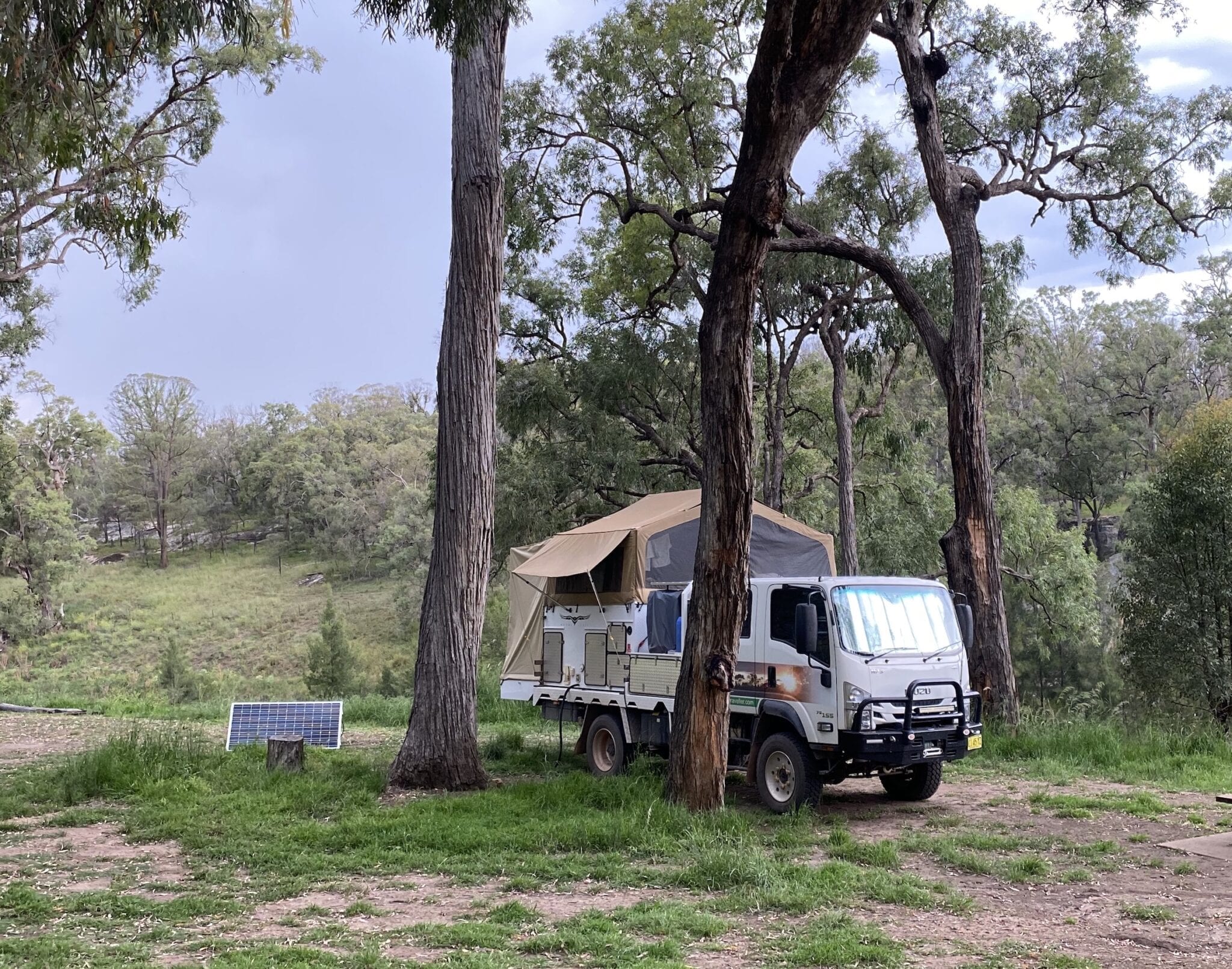 A little over four years ago, we became the proud owners of Wedgetail #100.

Now I admit to being slack about posting information about our Wedgetail Camper. But there’s a good reason for this.

There’s not much to report.

In fact, our Wedgie is a bit like your trusty Leatherman pocket knife. It just does the job without fuss, and you know it won’t let you down.

Our Wedgetail Camper is similar to what’s now known as the Wedgetail 22. Of course, they’ve developed in the 4 years since we bought ours. However, the solid structure hasn’t changed… the new ones are just as durable.

And if you’re after all the details of our unit, here’s a video walk-though of our Wedgetail slide on camper.

Before we report on any issues we’ve had to date, let’s have a look at what our Wedgetail Camper has been subjected to over the past four years.

Our Wedgetail drew the short straw. Unlike some of her sisters who spend lots of time in storage and get wheeled out for the occasional trip, #100 has well and turned earned her keep.

You see, we live in our Wedgie and have been for nearly three years. So she gets used every day. And we wanted a slide-on camper so we could go anywhere without the hassles of towing.

As a result, our Wedgie has indeed gone anywhere and everywhere. She’s done over 100,000km over some of the worst possible roads in the country… the Finke Track where we couldn’t get over 20km/h for hours on end due to the massive corrugations, the Savannah Way where the corrugations shake everything to pieces, Burke Developmental Road and so on.

She’s been through a lot:

And all this while being shaken, bounced and twisted on the back of our Isuzu 4WD truck.

A few absolutely minor issues, given the pounding our Wedgie has copped.

I mentioned earlier we’ve been through a couple of savage windstorms. During one of those storms, we had the Wedgetail facing completely the wrong direction.

When you camp in strong wind in a Wedgie, the best angle is to have the front right corner facing the wind.

But we were caught by a sudden change and the wind blew in straight against the back face. We couldn’t turn around because we had the camper on its legs… and it was night time, and very windy!

The back face is the weakest point, although that’s a relative term.

Sustained winds of over 110km/h blew all night, mostly straight into the back of the Wedgie and occasionally whipping in from every which way. That was an “interesting” night!

Next morning, we discovered the pole holding up the stair awning was bent inwards like a banana. No surprises there.

The wind had also ripped one of the tropical roof tie-down straps. A trip to the hardware store for a strap and some needle and thread sorted out this issue.

Same with the bent pole. That was an easy fix too.

And let’s get this into perspective. Our camper should have been ripped to shreds, the wind was that vicious. We were in a caravan park at the time and there was utter destruction all around us… gazebos torn to pieces, tents ripped apart with their occupants still inside and many broken caravan awnings. It was carnage!

I’ve replaced two sets of pop rivets. The first set were in the floor where the Thetford 165 Porta-Potti lives. Constant bouncing of the heavy toilet (15 litres in the flush tank and up to 21 litres in the holding tank) sheared off the pop rivets holding the floor up, along one edge.

Another set of pop rivets let go in an unusual place. It’s a vertical panel inside the fridge compartment. When I mentioned this to Darren at Wedgetail Campers, he hadn’t seen it happen before. We suspect it might be related to our unique setup… maybe the Wedgie is being twisted diagonally from corner to corner.

Regardless, I replaced the aluminium pop rivets with larger stainless steel ones and it hasn’t happened again.

Not surprisingly, we’ve had to replace the zipper sliders in our fly screen door a few times and in the canvas door slider once. These doors get used constantly, so we expected they’d need attention from time to time.

We carry a packet of zipper sliders, because these things always fail at the least convenient moment!

Again, this is normal wear and tear… accelerated by us constantly using it.

Our inside laminated bench-top developed a couple of small cracks at stress points, way back when Wedgie #100 was only a few months old.

We were too slack or too lazy to get it repaired under warranty, so that’s our problem. The cracks haven’t grown since they first appeared.

These things happen and it’s totally our fault for not getting it repaired under warranty.

Way back when we first bought the Wedgie, it had a new-style burner swing arm on the outside kitchen, complete with gas strut. The latch to keep it closed was attached to a kitchen shelf.

Pretty quickly, the constant vibrations cracked the kitchen bench and flogged out the latch’s locating hole in the burner body.

A quick trip to Wedgetail Campers solved both issues and it’s been perfect ever since. It only happened because it was the first of a new style of swing arm.

We’ve had two camper lid latches shear due to extreme corrugations, once on the Finke Track and again on the Savannah Way through Limmen National Park.

Both times, we’ve been travelling over those horrible transverse corrugations. You know those ones that are offset slightly on either side of the vehicle? So you get that horrible twisting motion, the kind that snaps things.

Given the conditions, I’d call this wear and tear. Most campers aren’t going to suffer this kind of torture.

We camped near Dalby, inland from the Queensland Sunshine Coast one night. Now it’s the last place we expected to get a decent frost.

However, that night the temperature plummeted to -5 deg C. The water pump froze solid and cracked the pump housing.

After replacing the pump, we bought two of those reflective sun shields you use across the inside of the windscreen. So now when we’re camped in a cold place, we slide them between the underside of the camper and the tray to insulate the pump. It has worked so far.

Actually, we’ve decided the best way to avoid this happening again is to avoid anywhere cold enough to have frosts. We like this plan!

So that’s about it. A very short list, given the brutal life Wedgie #100’s been subjected to.

There might be the odd nut or screw I’ve had to tighten, but these things are so minor they’re not worth mentioning… they’re normal wear and tear.

Apart from the few rivets mentioned earlier, the body shell is absolutely bulletproof. All the doors still seal perfectly, none of the latches have broken and dust ingress is virtually nil. In fact, the body integrity is as new.

When we bought the camper, I remember David at Wedgetail saying the body’s designed to twist and flex. Well, we’ve certainly proven his design and it has passed with flying colours.

The paint has survived the test of time. It has a couple of small nicks, but is in remarkable condition. And thanks to a combination of the camper sitting inboard on our truck’s tray and the tough paint, there’s not a single stone chip.

As you’d expect, the canvas is starting to look tired. Structurally it’s still 100%. No leaks, tears or rips and all the seams are fine.

The Velcro strips which attach the tropical roof to the main canvas body are pretty brittle now and will need replacing at some stage.

And the fly screen entry door and plastic windows are showing their age… no damage, just looking a bit daggy.

There will come a time in the next few years where we’ll need to replace the canvas top. But remember, we’re accelerating the wear massively. What we’re seeing now wouldn’t occur for at least ten years under normal usage.

The internal poles and frames are still in excellent condition, despite a couple of accidental attempts from us to bend them whilst packing down!

We’ve had zero issues with the ancillaries. I’m talking about these:

Most definitely. Not only is it the most innovative and functional design of any slide-on camper on the market, the build quality is superb… and it’s made in Australia.

If we were buying a new Wedgie now, there’re only three things we’d add/change:

We love our Wedgetail Camper. It’s ideal for our needs and hasn’t let us down once.

There are aren’t too many camping setups that will take the punishment we’ve dished out to our Wedgie and still be going strong. And when you add the luxury features like an internal shower and gas heater, I can’t think of any other brand on the market that would come close.

Supposedly, every camping setup has compromises. However, with the Wedgetail these compromises are few and far between.

Note: We have a $500 discount deal with Wedgetail Campers. Having said this, all our articles and reviews are 100% upfront and honest. We tell it how it is.