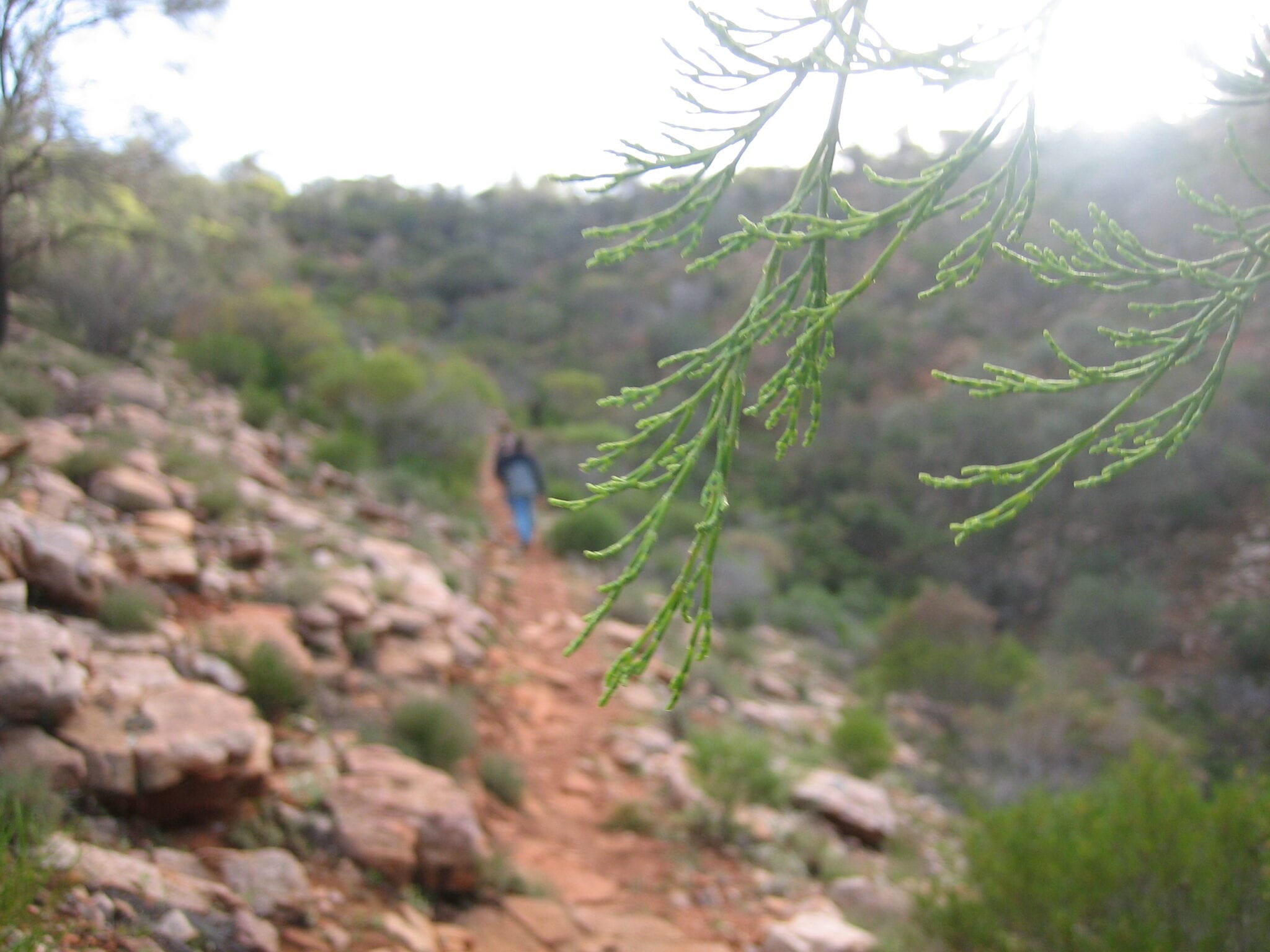 Let’s say you were planning to follow the Murray River from Renmark in South Australia down to its mouth at the ocean. But, the forecast in that direction was for gale force winds, showers and cold weather. What would you do?

Yep, us too. We headed in the opposite direction and ended up at Mt Remarkable National Park on the Spencer Gulf!

While camping at Renmark we met Russell & Joy Martin. They have 550 acres on the Spencer Gulf, just opposite Mambray Creek Campground in Mt Remarkable National Park. Russell actually works at the Park.

So after speaking to them, we decided to head that way.

So what can you see between Renmark and Mambray Creek? We’ll give you a quick rundown.

Travelling Along the Murray – Wineries, Fruit Crops and Historic Towns

West of Renmark, you’ll find a strange mix of wineries and fruit crops in among what looks like very infertile country. It’s scrubby and sandy just off the Murray River.

Yet it seems grapes and citrus thrive here… when you add water. Like many industries reliant on the river water these days, water allocations are becoming less predictable and many farmers have been priced out of the water market.

So there’s also quite a high proportion of citrus crops that have been abandoned, left to die because they’re no longer profitable.

Quite a few historic towns are dotted along the river. Places like Waikerie, Morgan and Cadell for example all have ties back to the days when paddle steamers plied the Murray.

As we learnt when we were given a private tour of Banrock Station though, the locks built for the paddle steamers have created immense problems.

With the river as much as 3 metres above its natural level in places, surrounding floodplains have become saline. Ancient species like river red gums cannot live in these conditions, the salt kills them. And without the natural wet and dry cycles, new seedlings never get a chance to take root.

Sooner or later you have to cross the Murray River. There’s only one option, the ferry!

Ferries operate at Lyrup, Waikerie, Cadell and Morgan. Here’s all the details of ferry locations along the Murray, in case you’re curious. It’s good fun and something quite different. You’ll probably share the ferry with a few cars and the occasional truck.

Our favourite town along here is Morgan. It was a vital port town back in the days when paddle steamers were the lifeblood of the region. It’s a place full of history, with lots of old stone buildings and a beautiful park along the riverbank.

Getting Blown Backwards to Burra

From Morgan we headed to Burra into an incredibly strong headwind. This drive is deceptive. You’re very gradually driving uphill most of the way so combined with a headwind, you can feel like you’re getting nowhere.

Keep an eye out for ruins of old stone houses along the way. Many of these were built by the first settlers who moved here during good seasons, then abandoned their land during the frequent dry times.

Burra is an historic town steeped in history. First settled in 1848, it was a vital source of copper for Australia and the world. Miners from Cornwell, Wales, Scotland and Germany all left an indelible imprint on the local architecture.

Once past Burra, you’ll be into wheat country. In a good season, the country around the small towns of Spalding and Crystal Brook looks magnificent. It can vary widely depending on the season though.

Sometimes it’s as bare as a billiard table!

Eventually you’ll reach the Augusta Highway, the main link from Adelaide to Port Augusta. Turning right, you’ll see Port Pirie on your left. This town sits on Spencer Gulf and is home to a large lead smelter. The dominant feature of this town is the enormous furnace chimney. The less said the better…

Looking off to the east though, the Southern Flinders Ranges keep you company all the way to Mambray Creek. They have that distinctive Flinders Ranges look… the ragged reefs of rock and a kind of worn out look. Hardly surprising, since they first formed about 800 million years ago!

Mt Remarkable National Park is also accessible from the eastern side of the Ranges. And if you’re feeling ridiculously energetic, you can walk all the way from Mambray Creek Campground on the western side across to the eastern side. Might give that a miss…

Port Germain, a Taste of the Good Ol’ Days…

A little further north is Port Germein, an old port on the Gulf. It once had the longest jetty in the Southern hemisphere.

The jetty is still 1,500m long but was 1km longer in its heyday. It was used to load wheat and wool onto sailing ships for transport to Adelaide. Hard yakka!

Living on the Spencer Gulf

At the beginning, we mentioned Russell and Joy. We caught up with them and learnt more about living on the Spencer Gulf, specifically the challenges of farming in such a variable climate.

Their farm was an original land release and has been in the Martin family since the 1860’s. They’re on the Western (seaward) side of the Augusta Highway and the farm runs down to Spencer Gulf.

It produces wheat with some meat sheep. Surprisingly, Russell’s father grew pea crops here until about 40 years ago. However, the climate has changed and this crop pretty much won’t grow here now.

They used to average one bad year in three, but had just endured 7 consecutive bad years. The climate has become drier and less predictable, meaning their farm is less viable as time marches on.

Water is a problem here, like much of South Australia. They don’t have permanent water, instead relying on bores and rainwater.

Russell and Joy are special people, so interesting and interested in others. Thanks for the company, firewood, food and hospitality!

The trip between Renmark on the Murray and Mambray Creek is filled with variety and interesting places to visit. You’ll see a bit of everything… wide open Murray River floodplains, arid scrub, open farming country, the unique town of Burra with its distinctive English village feel and then the beauty of Spencer Gulf and the nearby Southern Flinders Ranges.

And the bonus? Once you get to Mt Remarkable National Park, you won’t want to leave!

If you’re looking for variety, then this trip is hard to beat.