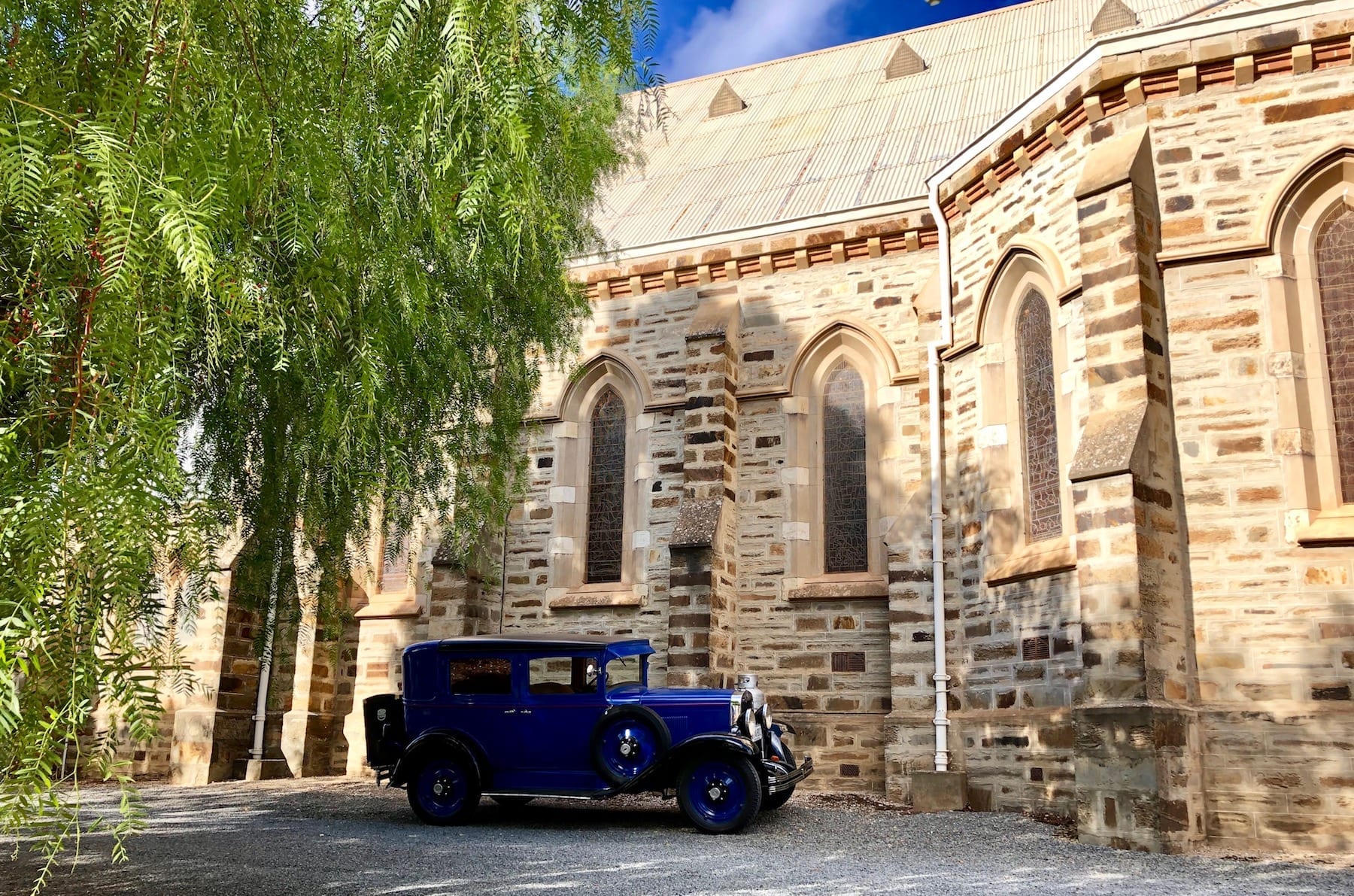 The first thing you notice when driving into Burra is stone… stone buildings, stone walls, stone bridges, stone abutments. Clearly this place has a history. And judging by the ornate stone buildings, a wealthy history.

But first, where is Burra?

Burra is a hub of sorts. If you’re travelling from Renmark or Mildura and crossing the Nullarbor, exploring the Flinders Ranges or heading up the Stuart Highway then you’ll likely pass Burra. And it’s on the way to Broken Hill from Adelaide.

Perhaps this explains the seemingly endless stream of tourists entering and leaving this historic town.

But there’s more to Burra than just a stopover on the way to somewhere else… way more. It was the first surveyed mining town in Australia, the largest metal mine in Australia in its time, and had a strong Cornish influence. This is a fascinating place.

It all started when Thomas Pickett discovered copper ore in 1845, near Burra Burra Creek. Now Thomas was a shepherd and no doubt was searching for elusive feed for his stock. After all, the country around here is pretty barren.

Like all things Australian, Burra Burra was soon abbreviated to Burra. Fair enough, Burra Burra is just too hard to say!

Copper ore veins lay exposed on this barren landscape of minimal topsoil and lots of rock. The South Australian government decreed 20,000 acres as the Burra Creek Special Survey Area. By August 1845 two groups of investors moved in, jockeying for the rights.

They were nicknamed the Nobs and Snobs, in other words investors with money. These two groups jointly bought the Survey Area and split it in two, a North and a South zone. The Nobs were the Princess Royal Mining Company and drew the southern lot. Despite the impressive name, copper mining on this lot proved to be short-lived.

The Snobs or South Australian Mining Association (SAMA) were the winners from all this jostling and chest-beating. Their northern lot was rich in copper ore and quickly grew into one of the largest copper mines in the world. This became known as the Monster Mine, officially the Burra Burra Mine.

Once the miners moved in, they chased these veins deep into the rocky ground. And who better to work this hard rock than impoverished Cornish miners?

The Cornish mining industry had collapsed, so many of these people decided to make a fresh start in far away Australia. Miners, tradies and engineers brought skills, technology and machinery well suited to the style of mining needed here.

These men knew how to mine the hard rock and the best ways to extract the valuable ore. They had the skills and the knowledge.

With more than 1,000 men and boys toiling above and underground at the mine, housing was at a premium. Many had large families so the population of miners and their families was probably closer to four or five thousand.

So what does a miner do when he has nowhere to live? Dig!

The steep banks of Burra Creek became dugouts, complete with rooms, chimneys and kitchens. While this might sound cosy, the reality was very different. The miners and their families lived in squalor… dirt floors, no sewerage and crammed in all along the creek banks.

About 1,800 people lived in these horrendous conditions. Many were young children. Outbreaks of typhus, smallpox and typhoid fever killed many, including over 150 in 1850 alone. Many of these were young kids.

In mid 1851 a large flood drove most of these people out and the SAMA built low cost housing for those of “sober” demeanour. And what of the not-so-sober? We can only assume they made do as best they could.

However, this was low cost housing Burra-style. And like every other building here, the Cornish built incredibly solid structures of rock. Many of these are still occupied today.

The striking thing about this town is the stone buildings. It seems like every building was built to last a thousand years. These Cornish miners knew how to work with stone and their craftsmanship is extraordinary.

Like many buildings of the era, a simple building just won’t do. Most have archways and small touches to make them unique, they exude wealth and prosperity. Even the low cost housing has stone walls at least 300mm thick and all internal walls are stone.

Burra Pub is built like a fortress. Originally one storey high, a second storey was added later. I reckon it could be ten storeys high and the ground floor stonework wouldn’t even notice the extra weight! Some of the internal walls are more than half a metre thick.

And the churches… well, they just had to outdo each other didn’t they. It just wouldn’t do for the Catholic Church to be upstaged by those horrible Anglicans down the road!

And it’s not just the buildings. There’s a brick wall on the Eastern side of Burra Creek which must be about 500 metres long and a couple of metres high. The labour and skill required to build this wall is astounding.

Everywhere you look you’ll see traces of Cornish craftsmanship. Creek beds, roadside guttering and even some footpaths have been meticulously lined with stone. Burra really is a stonemason’s paradise.

The Mine sits north-west of the town. Several buildings have been restored or preserved to give a clear impression of what this place was like. Again, the buildings are made from stone.

The structure that impressed us most however was a “simple” flue. This drew the smoke away from the engine house and up the hill to a chimney. The flue was built under the ground, entirely from stone, with an intricate overhead arch. The work that’s gone into this structure is unbelievable.

Go into the engine house and have a good look around. The Cornish brought their knowledge and expertise with them. They built this to house a 30 ton beam powered by a single cylinder steam engine. The beam oscillated back and forth to pump water from deep underground. We can only wonder how the builders managed to get the enormous beam up three storeys to its final location.

The Mine itself is about 100 metres deep and partly filled with water. It was open cut mined in the 1970s until it was no longer profitable. You can still see a few of the original Mine shafts from the 1800s along the walls.

The best way to see Burra is with a Burra Heritage Passport. Go to the Visitor Information Centre and pick up a key and a map. There’s a fee and key deposit. Several places in town and the Mine itself are locked and this key will give you access. You also get an excellent book detailing everything you ever wanted to know about the buildings in Burra and the Mine.

Burra Heritage Passport gives you access to a wide range of interesting places:

The Passport is best done in a vehicle, as it’s about an eleven kilometre loop. Although you could easily do it on a push bike. We decided to walk… not the entire eleven Kay’s mind you. We visited the locations close to the town centre one afternoon then walked to the Mine site the next morning.

We reckon walking or bike riding is the best way. You see all those little details that pass you by when you’re driving. Like the lengths people go to when they’re renovating to make their house look original or the stonework along a creek bank, looking as solid as the day it was built.

There are plenty of other places to visit in and around Burra. Go to the Information Centre to get all the inside info you’ll ever need from the friendly staff.

This town knows how to do tourism. Everything is clearly marked out both on maps and in real life. And you’ll find various plaques dotted around the town, explaining pieces of local history.

Not surprisingly, Burra has a wide choice of places to stay… motels, pubs, Paxton Square (originally the low cost accommodation mentioned earlier) and the caravan park.

We stayed at the caravan park. It has everything you need and is a friendly place. Being close to the centre of town, it’s the ideal jumping-off point for exploring the town and surrounds. And being low down near Burra Creek, you get some protection from the winds which seem to blow through here fairly regularly.

We’ve been through or driven past Burra at least five times. This time we decided to stop for a few days and have a good look around. And we’re glad we did, there’s so much to see here.

This truly is a town of stone built on stone. It’s like a Cornish village transplanted onto an alien landscape. A fascinating place. Oh and make sure you sample a Cornish pasty while you’re here!

Burra is on Ngadjuri Country.