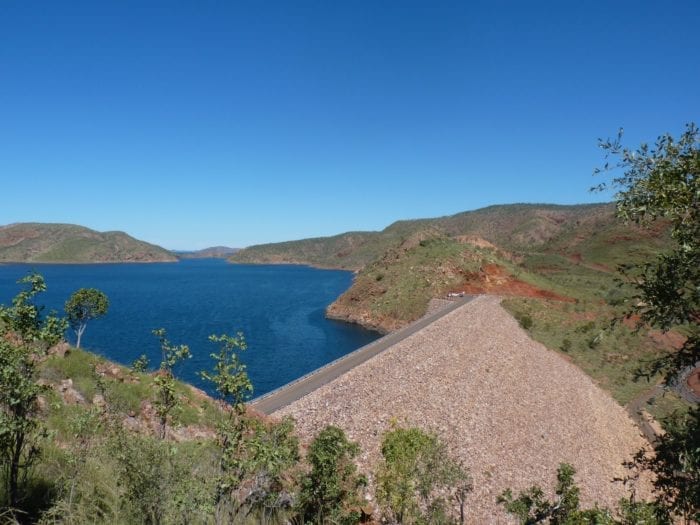 We left the Purnululu and headed for Lake Argyle to the east, near the WA/NT border.

Lake Argyle is enormous – so big that it’s classified as an inland sea. It holds 21 times the volume of Sydney Harbour, is about 70km x 40km and was built to provide a consistent supply of irrigation water for the Ord Irrigation Scheme.

The dam wall is tiny for such a huge body of water. It was cleverly positioned in a narrow gorge. The dam partially covers Argyle Station, one of the former Durack properties.

Catching Up With Len

Whilst holed-up in the rain at Drysdale River Station on Kalumburu Road, we met Len Dray.

Len is retired, originally from Newcastle NSW. His home was a fantastic self-contained set-up, mounted on the back of a 4WD Mitsubishi truck. Len made Lake Argyle his home in the dry seasons and loved it.

We understand why Len loved this place. It gets under your skin. And for us, we decided the East Kimberley is more scenic than the West.

Len had a passion for photography and had taken some beautiful photos on his travels, especially around the Lake Argyle region. Given the lighting in this area and the spectacular scenery, I can see why he kept coming back.

Charlie and Len spent some time discussing all things photography, and Charlie learnt heaps. A huge thanks to him for all he did for us while at Lake Argyle.

Luxury In The Kimberley

The van park is excellent, with green grassed areas and plenty of space.

A standout feature is the magnificent wet-edge pool with incredible views over Lake Argyle. Built at a cost of over $400,000, it was formed and poured on site. Apparently the concrete was poured at night because of the heat.

With some local knowledge, we found an extraordinary rock art site. This is located in a small rock cave and features some beautiful ochre paintings.

Argyle Downs homestead is a short drive from the van park. It was originally located on the Behn River, now under Lake Argyle. So the homestead was dismantled stone by stone and rebuilt.

It’s worth a visit just to see the old photos. You’ll also see lots of Durack family memorabilia inside the homestead.

Around The Dam Wall

Even though it’s tiny compared to the size of the dam, the dam wall is still pretty impressive – 68 metres above ground, 30 m below ground, 300 m long and 330 m wide at the base. It was completed in 1971. Modifications to the spillway in 1996 effectively doubled the dam’s capacity.

The Ord Irrigation Scheme was supposed to grow enormous crops of rice for export to Asia, hence the need for such huge quantities of water. However, wild geese had other plans and destroyed all crops before they could produce a single grain of rice.

Farmers have since found other crops more suited to the local environment. However, the Ord Irrigation Scheme really is tiny compared to the original grand plans for this scheme.

A hydro-electric power plant supplies power to Kununurra and the nearby Argyle Diamond Mine. It’s a clever use of available resources.

Argyle Diamond Mine was one of the world’s largest producers of industrial diamonds and the largest producer of natural coloured diamonds. An open cut mine, it started in 1985 and closed in late 2020.

It’s ironic that Patsy Durack spent considerable sums of money and resources opening up the short-lived Halls Creek goldfields, when he was in fact sitting on one of the richest deposits of diamonds ever discovered.

Of course, the traditional inhabitants of this area knew about the diamonds. A barramundi dreaming story tells of how a barramundi shed scales when trying to escape being captured. These scales turned into diamonds.

Lake Argyle is an excellent destination for travellers. With a spacious caravan park and campground, a world class wet-edge pool, river cruises up the Ord River from Kununurra, cruises on the lake and spectacular scenery, there’s certainly plenty to see and do.

TourRadar offer a great range of deals on cruises and tours in and around Lake Argyle.

Next time: A special sunset cruise on Lake Argyle.