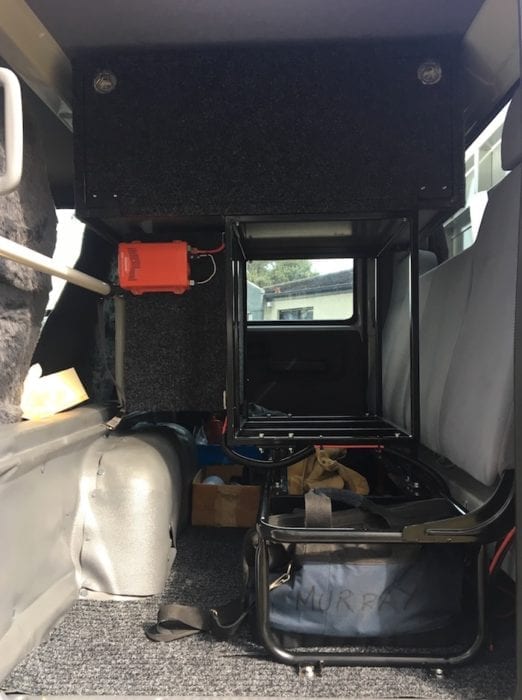 The dual cab Isuzu NPS is built as a work truck. So sound proofing and heat proofing are not a high priority. We decided to do something about it.

The rear wall of the cab is about 1.2mm thick sheet metal with no insulation whatsoever. The rear floor and the engine cowling (the white and grey “wall” at left of the photo below) have a thin vinyl cover with some thin insulation material attached.

In summer, this insulation really struggles. In fact, it’s pretty well ineffective. The heat from the engine radiates straight through and into the cab. On a really hot day (above 40° C), the air conditioner struggles to cope with the heat. I’m sure the large windows don’t help either. However, the windows are great for giving a panoramic view of the outside world – so no complaints there.

And being a work truck, the sound proofing’s not great. Not really an issue, but it could be less noisy.

More Junk In The Garage

I had a storage system made a while ago. The rear seat will carry four adults and has four seat belts. We didn’t need all of this passenger space, so decided to use some of it for storage.

The storage system bolts to the steel seat frame and then onto the grab bar behind the front seats. It uses the space allocated for the middle two passengers. We’re getting the seat base cut down, so we’ll still have seating for two adults adjacent to each door.

I had also bought two rolls of adhesive-backed closed cell neoprene. This I was going to place under the vinyl flooring for heat proofing.

Then decided I might as well replace the current vinyl flooring altogether – replace it with neoprene and marine carpet as well. The job grew – sound familiar?

Like most of these jobs, once I jumped in and started it was pretty straightforward. Unbolt the rear seat and lift it out. Then you have clear access to the floor. I unbolted seat belts and whatever else would unbolt.

Wiring for the rear interior light runs along the floor, to the switches on each door. This is badly exposed and just begging to be damaged. So I covered it with cloth tape to give it some protection.

The fiddliest part of the job is cutting around the various access hatches located in the floor pan and cutting around the bolt holes for the seat mounts and seat belts. After some careful cutting and measuring, the neoprene and marine carpet were installed.

While I was at it, I decided to line the rear engine cowling with neoprene, hoping to heat proof this as well. Then the seat went back in, we fitted the storage system and it was done.

Well, not quite. I had an old inverter that was mounted temporarily. It had served us well for over 10 years.

Wiring for the inverter is temporary. I still have to fit a junction box, as I want to install an Anderson plug, USB charging ports and some LED lighting in the storage system. That’s a job for another day.

Does The Insulation Help?

The difference is unbelievable! The combination of neoprene and marine carpet has heat proofed the rear seat area. Before I did this, after a long drive on a hot day the rear floor would always be hot to touch. Now? It’s cold, not a sign of any heat coming through the floor or engine cowling at all. Brilliant!

And the biggest surprise? The sound proofing. When I first drove it at highway speed, I instantly knew something was different, the truck sounded different. I hadn’t realised how much noise transmits up through the rear floor. The truck is actually quiet now, with minimal road noise.

So what’s next? Well, the first thing is to get the rear seat base cut down. That’s sorted and will happen shortly.

I mentioned earlier that the rear wall has no insulation at all. So we’ll attack that. And the front of the cab needs some attention as well, under and around the seats and over the engine tunnel. That’s for another day…

NOTE: The REDARC 350W pure sine wave inverter was supplied to us free, in return for a review. (That said, our reviews are always honest and authentic – we tell it how it is).