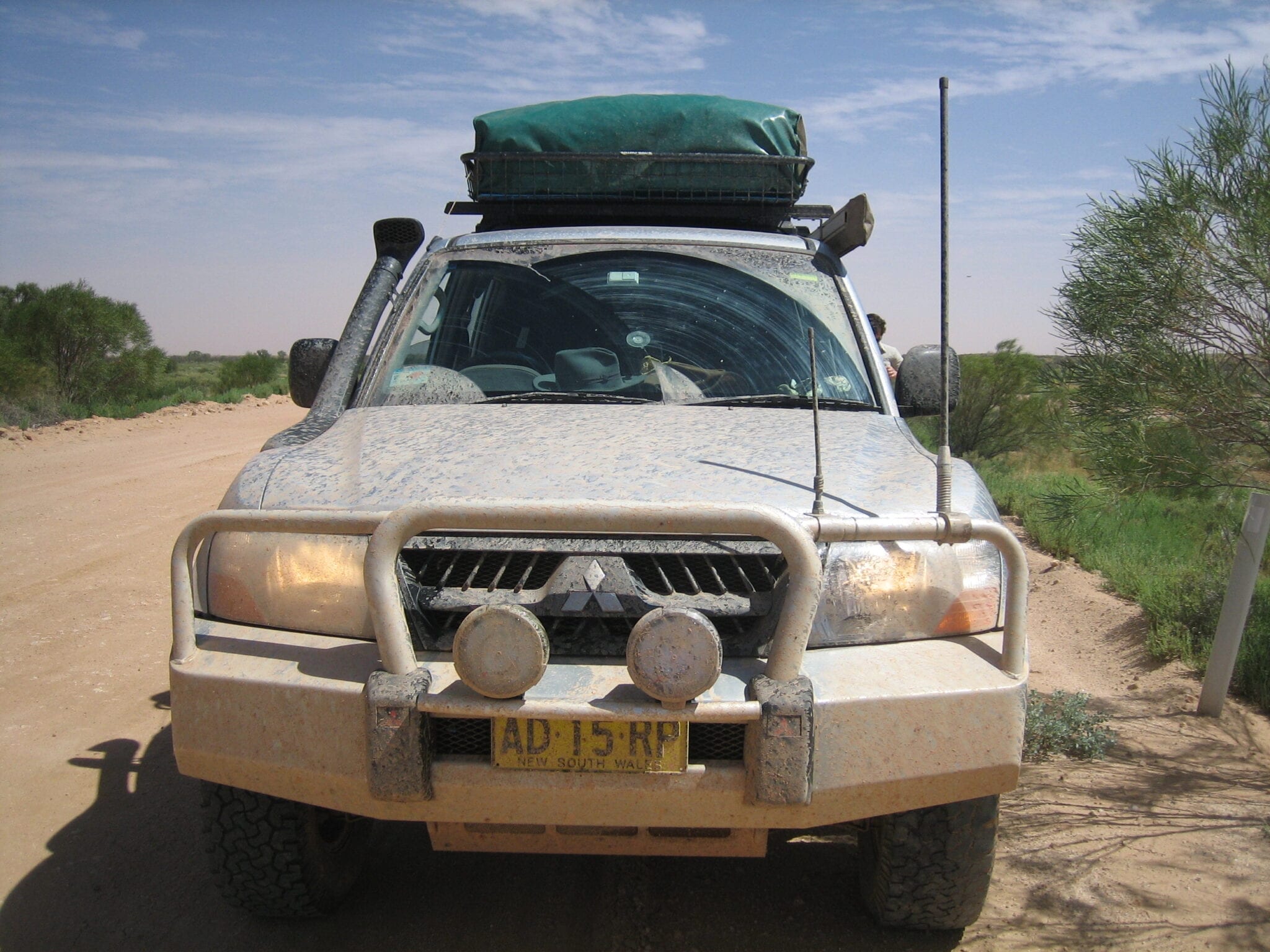 Let’s Build A Race Car – What To Do When Your Ol’ Faithful Dies?

What would you do if your beloved – but worn out – Pajero had a major mechanical failure? Spend $8,000+ repairing it? Send it to the wreckers?

Or give it to a mate who races cross-country 4WDs… desperately needs a new donor car… whose navigator just happens to be my wife… and whose service crew includes myself?

For me the decision was easy. Our 2005 NP GLX diesel was tired, very tired. We had bought it new. During the week, it was used more as a work ute than a family car.

On weekends and extended trips, our beloved Paj morphed into a proper 4WD, taking us further off-road than it had a right to. A simple 40mm lift with a suspension and shock kit from TJM, a set of BF Goodrich All-Terrains and a factory-fitted snorkel were all we needed to make it off-road capable. Much later in its life, an ARB rear air locker made this already capable vehicle even better.

Mitsubishi’s factory standard traction control system was excellent. It took care of the lack of wheel travel, applying braking to wheels that were sometimes half a metre off the ground. The Paj would simply continue on its way without fuss.

More Work For The Old Girl

In 2007, the arrival of a new camper trailer saw the Paj commissioned as a true workhorse. The camper was heavy – a true heavy duty, off-road camper.

We always tried to stay off the tar on these trips. So every kilometre was a torture test for the Paj… bone-jarring corrugations were generally the order of the day. Somehow the Paj soaked up all this abuse without complaint.

The Big Lap – Living The Dream

In 2009, we made the momentous decision to do the Big Lap. The Old Girl was hitched to our camper trailer and way we went. She carried our family of four around Australia for 12 months, over some of this country’s most notorious roads.

In hindsight we were probably overloaded. Another 60,000km was added that year, most of it on corrugated dirt roads – Great Central Road, Gibb River Road, Kalumburu Road, Cape York to name but a few.

These photos tell a story. We had to get out of Drysdale Station (Kalumburu Road, Kimberleys WA) in a hurry. The wet season was late and we were caught in it.

So we legged it to Kununurra – a 350km mud-splattered drive along the Gibb River Road. A wild ride but a great experience nonetheless. Not many travellers get to see this beautiful scenery in these conditions.

By the time we hit Kununurra, both car and camper looked like they had been cement rendered!

We did have one major issue on this trip. The dual mass flywheel started to make noises. So a replacement was fitted before it failed. The crew at Ireland’s of Cairns sorted it out – they were fantastic to deal with (free plug, credit where credit’s due). We waited it out at Cairns Coconut Holiday Resort (ditto). I could certainly think of worse places to be stranded!

The only other issue was a minor one. After ploughing through hundreds of kilometres of salty mud and water on the Oodnadatta Track, the reverse light circuit refused to co-operate. Strangely, this disabled traction control and stability control. Salt had penetrated a cable connector at the gearbox and was shorting it out. A second hand reversing cable was the remedy.

Considering what we did to the Paj, it was incredibly reliable.

And with 6 tyres on the road at all times, not even one puncture. Can’t complain about that!

Back to the story.

Fast forward to January 2016. The Old Girl wasn’t too pretty; countless bush pin stripes, stone chips from bumper to bumper and the odd dent and scrape made sure of it. By the time the fuel pump died, our Paj had 367,00km on the clock. It simply wasn’t worth fixing.

We had three choices. Sell it to a wrecker, strip it down and sell off for parts or give it to my mate Dave to convert into an off-road race vehicle. For me the answer was obvious…

She’s all yours Dave!

Next time: We start stripping out the interior. Go here to read more.