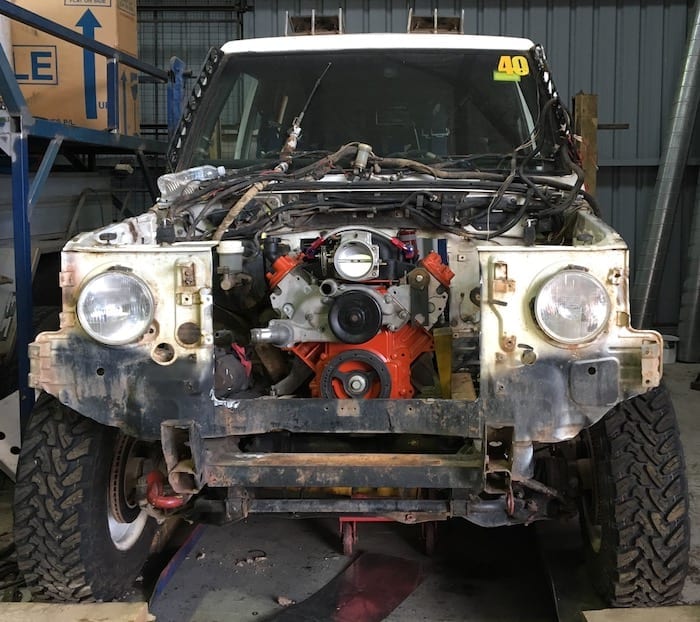 An Engine Swap… And An Unexpected Outcome

Last time, the trusty Astron 2.6L G54B turbo in Dave’s Rally Pajero was finally showing its age. Go here if you missed it.

Fortunately Dave knows heaps of people in the motor sports and performance car industry. Through a contact, he heard about an LS1 for sale.

Someone with too much money had the LS1 rebuilt and fitted to their car. After only a few weeks they decided they wanted an LS3 instead, so the LS1 was now spare. Wish I had that much money to spare!

Dave ended up buying the LS1. He just needed a gearbox to suit.

Might As Well Do A Lung Transplant As Well!

With more power and torque, it was quite likely the ancient hand-built Holinger gearbox wouldn’t be up to the task. One of Dave’s off road racing mates had a Hewland gearbox that had never been raced. These boxes were built for Ralliart in the 1990s and are a 6 speed dog box, hand-built inside a Mitsubishi housing.

So Dave decided to drop this in too.

Getting the LS1 and gearbox to fit meant cutting out the firewall and a big part of the transmission tunnel. Not only that, the front wheel arches copped the same treatment to make room for the exhaust manifolds. Like always, this job was growing!

More concerning was the condition of the body. The more we looked, the more cracks and creases we found. Yes the motor and gearbox would fit – just. But the body and chassis were worn out.

The LS1 and Hewland gearbox fitted in, but of course the real work was about to begin.

By chance, the diesel fuel pump on my NP Pajero suddenly died. The Paj had lived a tough life and was pretty well worthless. Dave’s rally Pajero was pretty knocked around. So we can up with a plan – why not retire the old Rally Paj and start afresh?

So that’s exactly what we did!