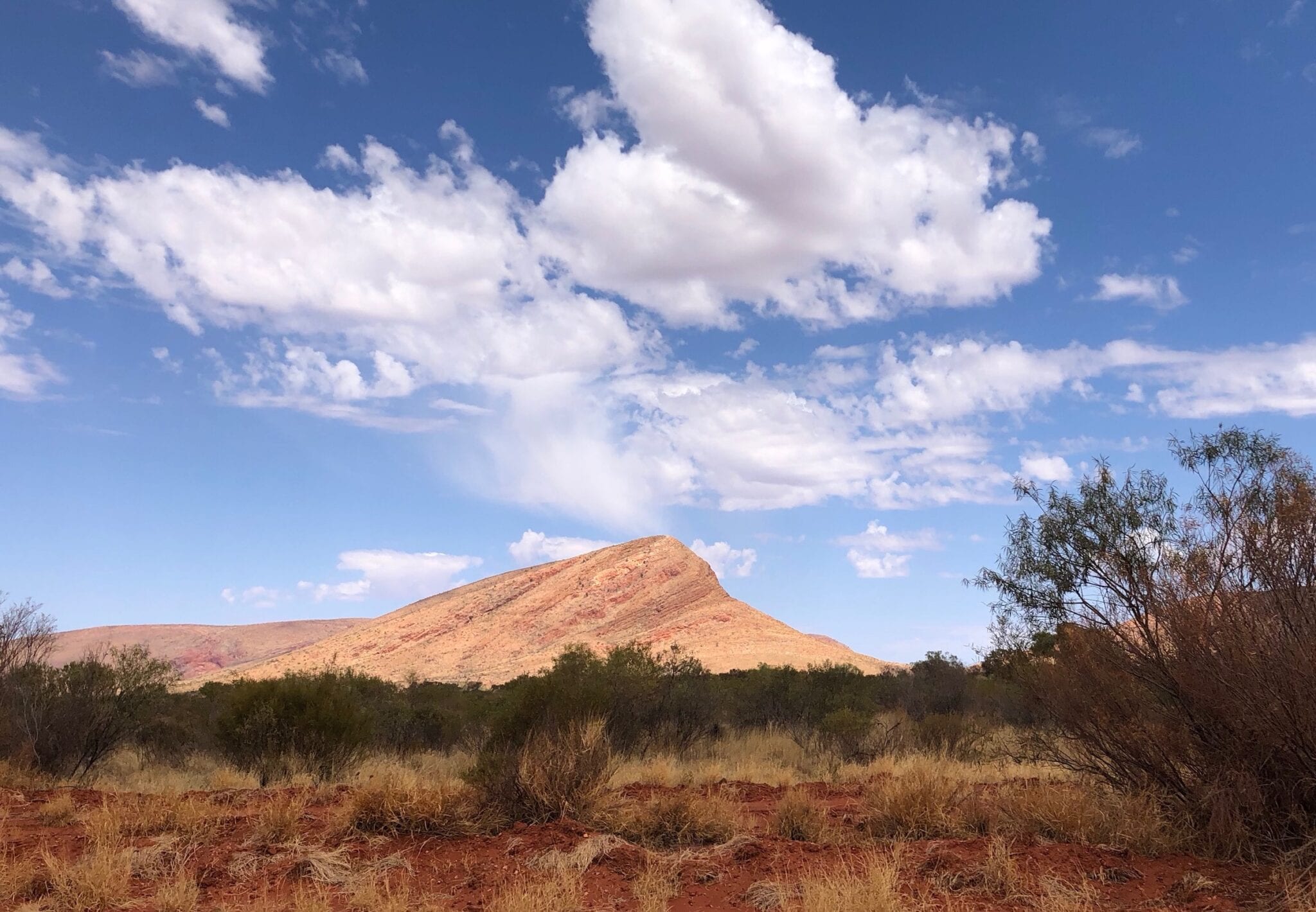 Driving The Great Central Road – Across The Great Victoria Desert

Last time, we left the Tjukayirla community and headed east along the Great Central Road. We were getting closer to the Great Victoria Desert, the largest desert in Australia. At roughly 400,000 sq km, it’s pretty big.

Somewhere between Tjukayirla and Warburton, we crossed the invisible line into the Great Victoria Desert.

Warburton roadhouse passed by our windscreen as we pushed eastwards. As the day wore on, the wind picked up and was blowing a strong hot westerly by the time we stopped.

About 100km east of Warburton, we pulled into Yarla-Kutjarra campground. This nestles in under some rough and craggy breakaways and gave us shelter from the wind.

This campground was built by the people of Warburton. They’ve built a drop toilet and shelter plus loads of spots to camp. It also has an excellent infographic explaining their country and what foods can be found in their country. Oh, and a really cool old tractor!

Unfortunately some idiots have de-faced the infographic and cut down trees for firewood.

Why do these idiots even come to these places? If they don’t appreciate it, then why don’t they stay home, graffiti their own houses and cut down the trees in their own backyards. Maybe they should take note of the “If you don’t like this country, then leave” sticker, which no doubt has pride of place on their back window. Morons.

The Winds Of Change… Southerly Change

Sometime during the night, a strong southerly smashed into us. So our protected spot was now in the face of a southerly gale. Packing down in the morning was a challenge to say the least.

On the plus side, we now had a tailwind or at worst a crosswind. We could see a big dust storm developing off to the west of Yarla-Kutjarra and other smaller ones whipping up around us.

The road was quiet all the way to Warakurna. We encountered just one vehicle in the 130km drive.

Warakurna is home to the Giles Weather Station. This is a vital link in the weather bureau’s chain of weather stations, monitoring the weather and feeding information into the Bureau Of Meteorology’s database every day.

Warakurna community is dwarfed by the Rawlinson Ranges behind it. Seeing these ranges in desert country is quite strange. Somehow they look a little out of place.

As you drive further east, ranges are more common. The road stays in sight of the Rawlinson Ranges for ages. They give way to the Petermann Ranges around Docker River. These are “real” mountains, dwarfing the surrounding landscape.

Western Australia and Northern Territory seem to have issues when announcing border crossings. Similar to our border crossing on the Tanami Road, we were across state boundaries before we even knew it.

Although they had an excuse this time. We were on a detour around a long section of roadworks.

Our memories of the Docker River section of road from our last trip were of a horrible rough corrugated stretch, by far the worst part of the road. We were dreading this section, especially since the Great Central Road thus far wasn’t great. However, it’s being formed up for sealing, so we needn’t have worried.

Mr Murphy struck again. After meeting just one vehicle all day, we now met a grader, a triple roadtrain and four other 4WDs along the narrow one-lane detour. This was quite a challenge, with deep sand and steep sides.

Past Docker River there’s a short stretch of tar, then an endless sandy road all the way to Kata-Tjuta. We normally love these wide sandy roads, but this one is absolutely horrendous.

After pushing through a deep section of soft sand, we stopped beside 2 trucks pulled up in the middle of the road. They were carting earthmoving equipment from the Menzies in the WA Goldfields to roadworks near Kata-Tjuta. One of the trucks had blown a hose and the poor blokes were lying under the truck, half buried in sand.

Further along the road was a 4WD and trailer parked up. The 4WD was jacked up with the wheel missing. They had run out of spares and were waiting for someone to return from Yulara with the repaired spare. It would have been a long wait.

Keep an eye out for Lassetter’s Cave. This is where the more than slightly crazy Lassetter was found in 1931, after setting out in the January heat to re-discover his fabled mountain of gold. He should have stayed home. After all, the only place the mountain of gold existed was in his over-active imagination…

We had intended to camp at Docker River campground. However it was inaccessible due to the roadworks happening there, plus it looked pretty shabby. So we pressed on.

We pulled up about 60km short of Kata-Tjuta, surrounded by endless white spinifex and beautiful flowering plants.

Occasional light showers and heavy black clouds made for an incredibly beautiful sunset. Big black clouds with a deep orange sun setting under them. Welcome to the Great Victoria Desert!

Our two mates who were driving the trucks rumbled past on dark. We were relieved they’d got going again. I’m sure they were too…

If you’re looking for places to camp, we’ve compiled list of possible campsites along the Great Central Road here.

For more information on supplies, fuel and permits, go here.

Smacked In The Face

Up early and off to tackle the last piece of this horrible section. Finally we entered the Uluru-Kata Tjuta National Park and onto the blacktop. The trip was over!

We emerged out of the Great Victoria Desert, straight into one of the most popular tourist places in Australia. Buses, cars, vans, backpackers, beautiful people with superior attitudes looking down their noses at our dishevelled appearance… people everywhere.

It felt like we’d been smacked in the face by civilisation.

In fact we felt like jumping in the truck, turning around and heading west again. Back into the desert, back to peace and quiet. We had left Alice Springs 3 weeks earlier, driven across the Gary Junction Road to Marble Bar, down through the Pilbara and Goldfields country, then across the Great Central Road.

Only 3 weeks, yet it felt like a lifetime. A lifetime of peace, serenity and witnessing some of the most remote and beautiful land in this country.

Can’t wait to do it again.

This section of the Great Central Road passes through Ngaanyatjarra, Mandjindja, Ngatatjara and Pitjantjatjara Country.