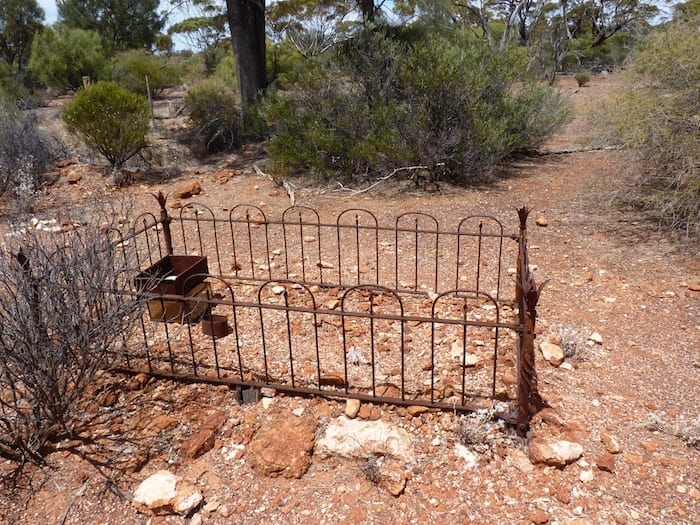 Having camped at Niagara Dam overnight, we were ready to continue our journey along the Golden Quest Discovery Trail. And we were in for a special surprise at Leonora. More on this later.

A quick road report. On this leg of the Golden Quest Discovery Trail, the road from Niagara Dam to Laverton are well maintained dirt roads. From Laverton to Leonora, you’re back on the tar. Take it easy on the dirt roads and you’ll be fine. Of course, dirt road conditions are ever-changing. It might pay to ask about the dirt roads at the Kalgoorlie-Boulder Visitor Centre.

Just up the road from Niagara Dam is the former township of Kookynie. Remnants of old mine workings mark this as another ex-gold mining town. The Grand Hotel is still open and operating, a survivor from the gold rush days.

The Grand outlived the other six pubs in the town, perhaps because it was closest to the (now closed) railway station. Go inside, grab a drink and have a look at the old photos on the walls. They’ll give you an insight into life around town in the gold rush days. As a contrast, this item from the ABC gives you an insight into daily life in Kookyne now.

Excellent interpretive signs are dotted along a walking trail through the town. The residents have restored some old buildings and the place has a good feel to it. Kookyne has access to reserves of underground fresh water, a rare luxury in this part of the world.

Leaving Kookyne, you’ll follow the Golden Quest Discovery Trail vaguely north-east. The next stop is a series old old rail bridges on the now defunct Menzies – Laverton line. It’s worth stopping, to get a feel for the challenges faced in building a rail line in this country.

The engineers faced a unique challenge out here. Most of the time, this country is dry as a bone. But occasionally, massive rains will come through and flood the entire region. So the engineers had to second guess which creek beds would flood and how deep the water would be.

You’ll see the concrete pylons of a rail bridge still intact. However the rail line was severely damaged by flood and a train derailed due to the damage. Looking at the arid terrain, its hard to imagine a flood large enough to cause such damage.

A Council Chambers With No Town

On to Mt Morgans, another prosperous gold mining town in the early 1900s. Now, the town is empty… except for the fully restored Council Chambers. Painted white, it is like a beacon on the horizon and stands proudly overlooking the non-existent town.

It’s quite amusing to see street signs pointing to streets that don’t actually exist anymore. And the remains of the old rail platform indicate this was once a bustling town.

The grave of John Aspinall lies at Hawk’s Nest on the road to Laverton. He was a New Zealander who caught the gold bug. Aspinall was struck by lightning and died as a result.

Considering Aspinall moved from a beautiful, lush country into a harsh, arid and unforgiving landscape it’s extraordinarily bad luck. He could have died from typhoid, thirst, starvation, a mining accident or even a snake bite… but no, lightning got him in the end.

It turns out, death from lightning strike wasn’t unheard of out here. I suppose when you think about it, there aren’t many other things to hit. And the landscape is so flat that you’d be fair game in a thunder storm. In fact, a group of 11 rail workers were recently struck by lightning north of Kookyne.

More Than a Jumping-Off Point

Laverton is next on the list. Make sure you visit the Great Beyond – Explorer’s Hall of Fame. This is an interpretive centre, giving you a feel for life in the early days. It also houses the Laverton Visitor Centre.

Another must-see is the Laverton Outback Art Gallery. They display and sell some incredible Aboriginal art, as well as artefacts.

Laverton is the furthest point away from Kalgoorlie and the most eastern point on the Golden Quest Discovery Trail. It’s a jump-off point for the Anne Beadell Highway and the Great Central Road, which takes you through to Uluru in the Northern Territory.

This is a good place to stay for the night or even a few days. You can explore the area, there’s lots to see. Remnants of old gold mining towns are dotted around Laverton.

We elected to keep going. We started heading west towards Leonora. Not far out of Laverton is Windarra, famous for the Poseidon nickel mine.

In the late 1960s the Vietnam War was at its peak and nickel was in high demand. Nickel was discovered at Windarra by the Poseidon NL company. Speculators poured into Poseidon and pushed the share price from $0.80 to a high of $280. And they hadn’t even started mining yet!

By the time Poseidon started mining, the nickel price had dropped. To compound their problems, the quality was lower than expected. Six years later, Poseidon NL delisted from the stock exchange. The Poseidon bubble was over.

You can view the remnants of the Poseidon mine from a lookout on Mt Windarra.

Our chosen camp spot was at a caravan park in Leonora. We set up on a stretch of beautiful green grass, a pleasant change for us. The van park was basic, but has all the facilities you need.

We struck up a conversation with a Kiwi couple who were camped nearby in their caravan. They caught gold fever a few years ago, while travelling around Oz for 12 months. Three years later they are still here prospecting with metal detectors.

They showed us a 10 oz nugget they found in Queensland a while back… and even let us hold it! Prospecting gives them enough income to continue travelling and prospecting around Australia. This couple spend time in a chosen goldfield, criss-crossing a patch of land for days on end.

After showing us the 10oz nugget, they then appeared with a handful of small nuggets they had found around Leonora. It’s unbelievable how much gold is in this area, even after over a hundred years of continuous mining and prospecting.

I can fully understand how easily the gold bug could take hold. Really, it’s a form of gambling… just one more sweep of this area,… I’ll just dig a bit deeper… I’ll just follow this creek a bit further.

While I’d like to try my hand at prospecting with a metal detector, I’m not really game to give it a go. While gambling and the like hold no interest for me, I suspect prospecting could easily sink its claws into me.

This was a fitting end to a day of following the Golden Quest Discovery Trail. By day we tasted the rich gold mining history of Western Australian goldfields. By night, we held this precious metal in our hands… momentarily at least.

Next time we continue our journey along the Golden Quest Discovery Trail.