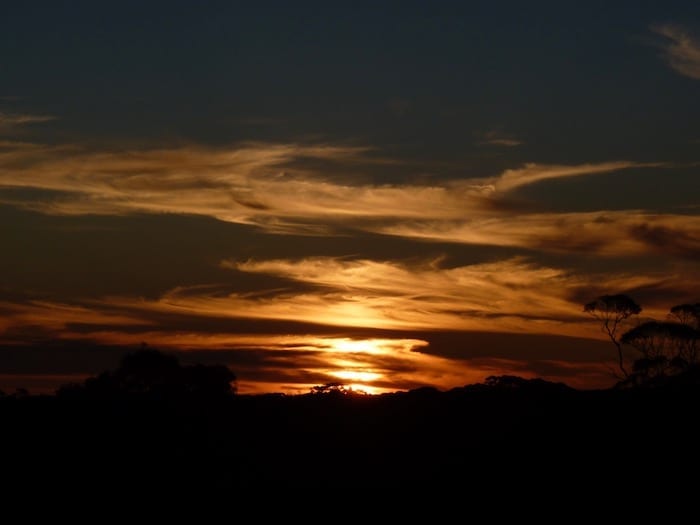 The Discovery Trail leads you on an almost 1,000km loop north, into the goldfields. The guidebook that you’ll purchase is exceptional, worth every cent. You download an audio file and the guidebook prompts you to play audio at many points along your journey. These audio files are often interviews of locals talking about the history of the area or stories from the past.

These are excellent. They bring the localities to life and give you a real sense of the country you’re in. Marketing gurus talk about immersive experiences… well this is certainly one of them!

You can also download a free phone app which contains a wealth of information. Just remember to download the audio files while you still have phone reception!

And the roads? Well on this leg of the Golden Quest Discovery Trail, they’re a mixture of tar and well maintained dirt roads. You’ll have no trouble in a normal car if you take your time. Of course, dirt road conditions are ever-changing. It might pay to ask about the dirt roads at the Kalgoorlie-Boulder Visitor Centre.

Warning: Gold Fever Can Be Fatal

Gold fever is a strange affliction. There is no drinkable water within about a 300km radius of Kalgoorlie, not on top nor underground.  However, this did not stop hopefuls from setting out in search of the “next big one”.

Many men perished from thirst, as they would set out with a small amount of water and hope for a thunderstorm to refill their water supplies. A very risky strategy in such dry country.

During one particular gold rush to the ironically named Siberia in 1893, many men died of thirst. Hundreds of men deserted Coolgardie overnight, after a miner discovered gold. Later that day another wave of men passed through Coolgardie from Kalgoorlie, heading into the unknown. None of these men had any knowledge of the terrain and no clear idea exactly where the gold was actually discovered. They set off regardless.

It was only through the extraordinary efforts of a few brave policemen and an Afghan cameleer that more men didn’t die. When news came through of the unfolding tragedy, the cameleer loaded his camel team with water and started out. He encountered many who were mad from thirst.

The number of men who perished is unknown. There is a detailed account of this tragedy here.

With our trusty Golden Quest Discovery Trail guidebook in hand, we started our journey.

First stop was Coolgardie, once the third largest town after Perth and Fremantle. Gold was first discovered here in 1892, the first gold discovered in Western Australia. So the next Australian gold rush was on! Kalgoorlie eventually overtook Coolgardie as the main centre in the goldfields.

Kunanalling is north of Coolgardie. All that remains are a few stone ruins and signs of diggings. Like many other goldfields towns, Kunanalling’s light shone brightly for a short while then quickly died out. With no fresh water and a shortage of timber for fuel, mining costs became prohibitive. Kunanalling faded away.

Kunanalling is an example of how towns were built during the gold rush. Homes were built to be transportable, so when the next great rush happened they were dismantled and moved. Few buildings were built from stone, so most of these towns simply disappeared after the gold ran out.

Murder In The Goldfields

Not far north of Kananalling is Ora Banda. The Ora Banda Historical Inn is still operating, one of just a few buildings left in the settlement.

Ora Banda Historical Inn rose to prominence in 2000 for all the wrong reasons. Don Hancock was an ex-Criminal Investigation Bureau chief from Perth and owner of the Inn. A group of Gypsy Jokers (motorcycle gang) turned up and were kicked out of the Inn. Later that night while camping, one of them disappeared into the bush to relieve himself and was shot dead… supposedly by Don Hancock, but he was never charged.

Hancock’s business and home were subsequently destroyed by firebombs, then Hancock and a friend were killed by a car bomb in Perth. A Gypsy Joker member later admitted to planting the car bomb as a revenge attack.

Moving north again, you’ll encounter Siberia. Regarding the name, there are two distinct possibilities. It might have been because it was the exact opposite of Siberia… typical Australian humour. Or maybe because it was a desolate wasteland, just like its namesake. Who knows…

Siberia cemetery is certainly a desolate place. Someone has painstakingly outlined each grave with white quartz rocks. These rocky borders highlight the unforgiving landscape in which this cemetery lies.

While visiting the cemetery, Ben randomly picked up a quartz stone off the ground. On one edge, a tiny gold nugget was embedded in the quartz!

It’s funny the effect this had on the four of us. Seeing raw gold embedded in the quartz awoke something in our brains. From then on our eyes were glued to the ground, occasionally picking up a piece of quartz and turning it over. It gave us a small insight into how powerful the gold bug can be.

Siberia had signs of recent activity. Amongst the numerous old mine diggings were placards warning prospectors to keep out. Obviously someone has taken up the mining leases and are probably going over the old diggings, in the hope of finding gold the original miners missed.

You’d need to have your wits about you, prospecting here. There are plenty of old mine shafts around, sometimes disguised in the undergrowth.

Not far north of Goongarrie on the Goldfields Highway is Menzies. This is one of just a handful of towns to have survived post-gold rush. Menzies was a service town for the goldfields further north, so perhaps this is why it was able to adapt. Menzies is a quiet place now, with some ornate buildings hinting of its prosperous past.

Menzies Cemetery is sobering. Every headstone tells a story. And the number of infants buried here is a sad reminder of past hardships.

The headstones act as a chronology of Menzies’ past. Typhoid victims from an epidemic, people killed in mining accidents and those who perished searching for their fortune in this harsh landscape… a reminder of how this was once frontier country.

With these sobering thoughts in mind, we pushed on ever northwards in our comfortable, air-conditioned 4WD. Turning off the Goldfields Highway onto a well maintained dirt road, you’ll find a great spot to camp at Niagara Dam.

An (Almost) Empty Dam In The Middle Of Nowhere

The ambitiously named Niagara Dam is a small dam in the middle of nowhere. It was built in 1897 to supply steam trains at nearby Kookynie with water, but was never used. Underground water was discovered at Kookynie before the dam even had a chance to fill.

Dam construction was overseen by the Railways Department. In typical government fashion, its initial cost blew out by 50% and the dam was a white elephant. However, they did inadvertently manage to build an excellent camping spot…

We were one of just a few campers and managed to snag a spot right under the dam wall. That night, we were treated to a full moon shimmering over the vast plains. Even better, the night was completely still… one of those nights where your ears ring because it’s so quiet. Perfect!

Niagara Dam is one of those totally unexpected campsites. You know the ones… you know nothing about it beforehand, then discover it’s just brilliant!

Our campsite at Niagara dam was the perfect end to a long day travelling the Golden Quest Discovery Trail. In just one day, we had already learnt so much about the history of the goldfields and the people who chased the elusive pot of gold.

The hardships suffered by the gold miners are difficult to imagine. No water, incredible heat and no services to speak of. Many hoping to earn their fortune, instead perished in agonising circumstances.

A lucky few did indeed strike it rich. However the old saying that “it’s better to be selling shovels than to be digging for gold” certainly rings true.

Next time we continue our journey on the Golden Quest Discovery Trail.