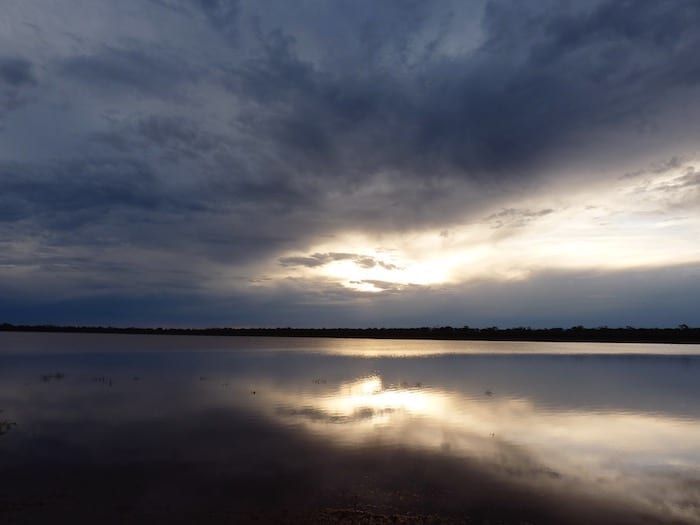 Presidents, Fresh Water And Statues In A Lake – The Golden Quest Discovery Trail

After holding the precious metal in our hands at Leonora, we pushed on for the final leg of the Golden Quest Discovery Trail. Sandy roads, more deserted gold towns and a pristine fresh water lake were in our sights.

Just out of Leonora is the Sons Of Gwalia mine. Originally an underground mine, this rich mine operated continually from 1896 to 1963. Western Mining Corporation leased the site including buildings to use as an exploration base. Fortunately, they preserved the old village, the State Hotel and a few other notable buildings.

In 1984, the mine was re-opened as an open cut operation. It’s still operating… still surrendering that precious gold.

You’ll notice an old building perched right on the edge of the huge Sons Of Gwalia pit. In fact, the pit actually bends around this house. Why is this building is so significant? Well, this was the mine manager’s house. And one of the mine managers was Herbert Hoover, future president of the USA. So Gwalia has some fairly serious bragging rights!

Gwalia has an exceptional collection of miners’ cottages, carefully preserved and maintained.

The living conditions were incredibly primitive. Corrugated iron walls and roof, no ceilings and certainly no insulation. Dirt floors and tiny rooms, no running water and no sewerage.

Gwalia’s local heritage group do an extraordinary job in preserving and maintaining this village. Without them, this history would have disappeared long ago.

You could easily spend a day at Gwalia. The State Hotel stands as a reminder of the past, like a sentinel keeping guard over the old settlement.

Statues In A Lake

Pushing westwards from Leonora, you’ll encounter wide, flat sandy roads. In places, these roads are like a highway. However take care as soft patches are nearly impossible to see in the glare. Slow down, there’s no hurry!

Crossing Granite Creek and passing through the now deserted Copperfield, you’ll reach Snake Hill which looks over Lake Ballard. This is a massive salt lake with strange islands marooned in a dry salt lake.

Lake Ballard is famous for a series of statues, part of a major international art project commissioned in 2003. Lone sculptures of human figures dot the lake, somehow looking like they belong here. A unique exhibition, unlike anything else we’ve ever seen.

Past Snake Hill you’ll encounter Ularring, a vital fresh water soak beside a huge slab of rock. No doubt, the original inhabitants were aware of this vital water source for thousands of years prior to the white man “discovering” it in the 1890s.

Ernest Giles stopped here on an epic journey from Beltana in South Australia. His group was supposedly attacked by the local Aboriginal people here. Subsequent gold discoveries in the district made this water source vital for both humans and horses.

At the top of the rock is a stone cairn erected in memory of Giles. As seems to be the tradition with stone cairns around the country now, it’s virtually compulsory to climb the rock and add a stone.

Moving onto Davyhurst, you’ll encounter… well, pretty well nothing. Like many gold rush towns, Davyhurst flourished, boomed then died. However, pretty well no trace remains apart from the cemetery.

A Lake, With Fresh Water!

And the birds! Being the only fresh water lake around, the birds just love this place. It’s so peaceful and quiet here. Make a point of camping here for the night, you won’t regret your decision.

Once you’ve accomplished this almost 1000km loop, you’ll have a much better appreciation of the hardships encountered by the early miners… and the lure of gold.