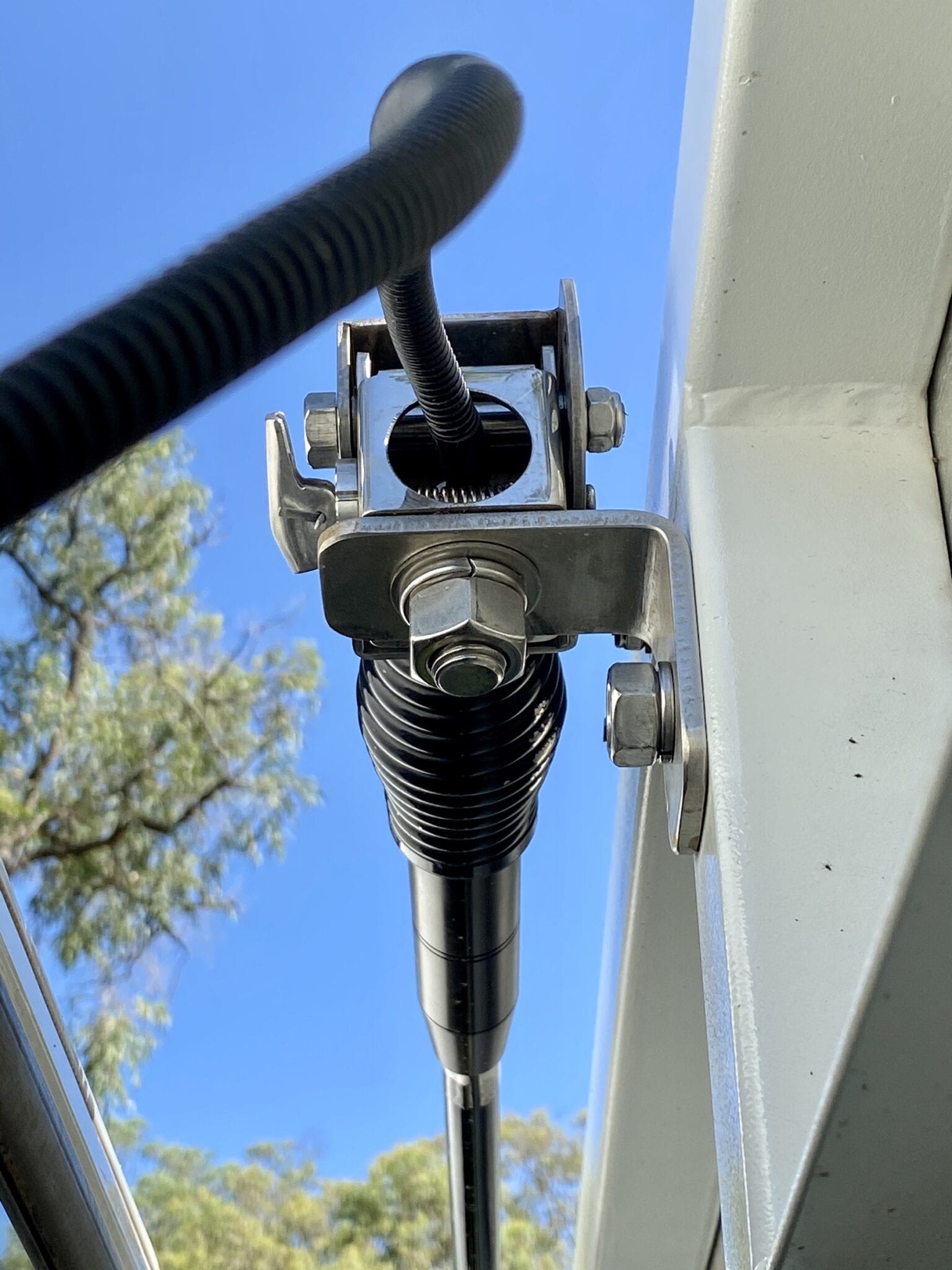 When we designed our truck camper, we spent a lot of time making sure the tray fitted snugly behind the cab.

If the tray was no wider or taller than the cab, then whatever gap the cab fitted through, the tray would follow… low tree branches, obstacles on the side and so on.

This has worked extremely well.

The only thorn in our side has been the antenna for our Cel-Fi GO mobile signal booster. The Cel-Fi has an external antenna and an internal antenna. For the Cel-Fi to work properly, both antennas need to be isolated from each other, as we discuss in detail here.

And the only way we could achieve proper isolation on our setup was to have the Cel-Fi antenna mounted on the tray’s headboard.

So now we had an antenna sticking above the cab… in a perfect spot to be wiped out by low-hanging branches. We sort of overcame this by using a short 4/5dBi gain antenna. But its range is poor compared to the original, much longer 6/8dBi gain antenna.

Use a fold-down antenna bracket. Then we could use the large antenna and fold it down out of the way when needed.

A quick Google search reveals quite a few fold-down brackets on the market. You can go for cheap and nasty or pay a bit more for quality. We’re strong believers in paying once for quality.

So after some research, we settled on the GME folding antenna bracket at around $130.

It’s made from polished stainless steel, with all components built to withstand years of punishment. And unlike most of its rivals, the main M16 mounting bolt is solid… rather than having a hole drilled through the centre for the antenna cable.

Fitting the Antenna and Bracket

GME have provided a slot in the side of the bracket where the antenna cable can exit. The problem is, it’s on the wrong side.

The slot is on the side where the antenna folds to. This means when it’s fully folded, the cable is bent in a tight 180° bend.

Not only this, for some reason GME fit a fancy internal cover plate (the black piece in the photo above). I’m guessing this plate is supposed to stop rubbish getting into the locking pin mechanism. Or maybe it’s to stop the antenna cable from getting caught in the locking mechanism.

But it means the antenna cable has even less space to bend and find its own comfortable bending radius.

Still, I can’t imagine a UHF cable would take too kindly to being bent 180 degrees either.

GME make quality products and I’m sure they know their products much better than I do. But I still don’t see the logic in bending an antenna cable over on itself, especially when there’s another way to do it.

The solution in our case?

We removed the internal cover plate and chucked it in the bin. Then we drilled a 30mm hole in the opposite side to where GME have their antenna exit point. Fortunately, we had access to a milling machine and could make a neat hole through the polished stainless bracket.

It was however a bit surprising we had to do these modifications. I would have thought common-sense would tell you that no cable likes to be bent over on itself… especially antenna cable.

Would this problem have been avoided with a cheaper mounting bracket, where the exit hole goes down through the centre of the mounting bolt?

No. The cable would still have been bent tightly when the antenna was folded down. And at least the quality GME bracket can be pulled apart, modified and re-assembled without damaging it.

So now we’ve modified the bracket to within an inch of its life, what’s the verdict?

We love it. It’s so simple to use, just a flick of the over-centre locking pin, rotate the antenna then flip the locking pin back in.

The antenna bracket is solid and sturdy… the antenna doesn’t wobble or vibrate at all.

If I was installing another large Cel-Fi GO antenna, I’d buy another one… now we know what needs to be modified first.

If I was buying it for a UHF antenna, yes I believe it would do the job. Although I do have reservations about bending an antenna cable over on itself. I suppose GME wouldn’t have designed the fold-down bracket like they have if it wasn’t okay. Still…

What about the cheaper versions with the cable exit hole through the centre of the mounting bolt? I personally believe they don’t give the cable enough distance to bend safely… although I’m happy to be corrected if you’ve been using one for a while without any issues.

Considering the rough roads we travel on though, I’m more than happy to pay a bit more for quality.

Note: We bought the GME fold-down antenna mounting bracket at full retail price. We are not affiliated with GME in any way.