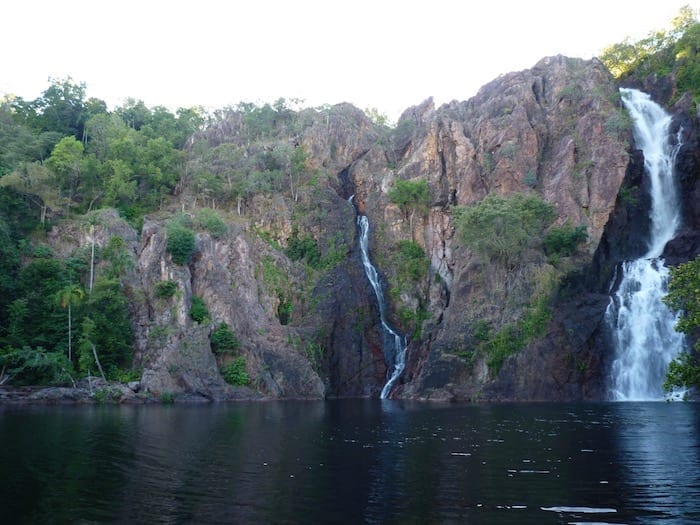 Discovering Litchfield National Park – Or At Least A Part Of It…

Travelling north from Katherine to Darwin, Litchfield National Park should be on your list of places to visit.

Litchfield National Park is about 120 km S-SE of Darwin. If you come down the Stuart Highway, the road is tarred all the way. The road within the northern end of the park is also tarred.

This road does a huge U-shaped loop for about 70 km, exiting the National Park on the northern boundary and quickly reverting to dirt. Along the loop road, you’ll have easy access to many of the better-known features like Florence Falls, Tolmer Falls, Wangi Falls, magnetic termite mounds and so on.

In other words, all of the popular tourist attractions. And being accessible by tarred roads means lots of people…

We had come to see the southern part of Litchfield National Park.

Now at the bottom of the U-shaped loop road, there is a turnoff to the southern regions of the park. This dirt track eventually meets with the Daly River road to the south. On the way you’ll see the Blyth homestead ruins, cross several creeks and swim at beautiful waterfalls… apparently.

But the southern end was closed. Hmmm, time for a change of plans.

This is something you have to be prepared for in the Top End. We were there in June. Normally the southern end of Litchfield National Park would be open by June. However a late wet season had caused damage to the southern track and other infrastructure.

So you just have to go with the flow (pardon the pun) and adapt… make the most of the situation.

We made our way back to Florence Falls 4WD campground. We decided to stay for one night and spend the afternoon swimming at Florence Falls. This campground is quite small, so we were lucky to find a suitable site.

A pretty walking track guides you from the campground to Florence Falls. Along the way, we encountered a large snake in the long grass bordering the track. I resisted the urge to run like crazy in the other direction. Clearly I’m not exactly fond of snakes. We stood a respectful distance from the reptile and waited until it disappeared into the distance.

Mind you, my eyes were like saucers for the rest of the walk. And funnily enough after that, every stick or piece of bark looked like a snake…

Arriving at Florence Falls, we were confronted with a hoard of people. The place was packed! After relative solitude along the Gibb River Road, this was quite a shock to the system.

However, we made the most of it. Being so accessible from Darwin, the size of the crowd was hardly surprising. Everyone was friendly and respectful of others.

Surprisingly, the water was quite cold. It was good to have a refreshing swim and just generally laze around for a while.

Next morning we decided to pack up and make our way to Darwin. With Wangi Falls on the way, we called in to check it out and have a refreshing swim.

The Wangi Falls carpark was big and we certainly weren’t expecting to find a rather large cafe and eatery there. Unfortunately, the plunge pool was closed because a saltwater crocodile had decided to move in during the wet season.

Wangi Falls is beautiful. A waterfall cascades about 100 metres over lush cliffs and rainforests and palms surround the plunge pool. This is more like it!

Since we couldn’t swim, we instead took a walk through a magnificent rainforest. So peaceful and quiet, with few other people around.

With our visit completed, it was time to saddle up and head to Darwin.

Instead of driving back out to the Stuart Highway, we continued on the U-shaped loop road until it exited the park to the north. Soon after this, the road became dirt and wound through some magical scenery.

And the best part? We hardly saw another vehicle. Perfect!

This road meets Cox Peninsula Road then you go through Berry Springs and eventually meet up with the Stuart Highway.

Litchfield National Park is surprisingly dry. Being in the Tropics, we were expecting to find pockets of lush rainforest. Wangi Falls was probably the closest scenery to what we expected.

Having said this, we of course didn’t get to see any of the southern areas. Oh well, we’ll just have to go back another time and check it out!

With a tarred access road and its close proximity to Darwin and the Stuart Highway, Litchfield National Park will always be busier than most Top End National Parks. And that’s fine… it’s great to see people enjoying this wonderful country of ours.

If you’re looking for adventure tours which include Litchfield National Park, TourRadar has a wide selection.