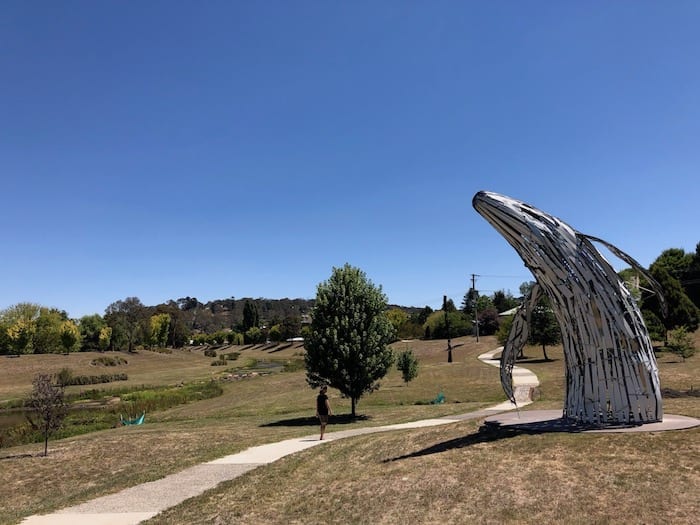 Walcha is one of those unexpected surprises. We pulled into Walcha knowing nothing about the town and very little about the region. What we discovered was a proud town with a strong community and a long history.

Walcha sits at the intersection of Thunderbolts Way and the Oxley Highway in the New England region. The town has mild summers and cold winters, with occasional snow.

We approached from the South, along Thunderbolts Way. What a drive! The road travels through sub-tropical rainforest, open grazing country and everything in between. It twists and turns, up hill and down dale.

One particular climb from Curricabark River Valley is intense, especially in a small truck! With no warning, you’re confronted with a steep incline that winds ever upwards for what seems like forever. Second gear and 20km/h was the order of the day for us.

Once you’ve conquered this climb, stop at Carson’s Lookout. Eric Carson built this leg of Thunderbolts Way to get timber from the high country back to his sawmill in Gloucester. He had lobbied the government about building a road for several for years, without success. So he built it himself in the early 1960s. He organised a team of road builders and made a start. This must have been an insanely dangerous task… the country is wild, steep and unforgiving.

The fruits of Carson’s labours are still evident today, with timber jinkers carting loads of timber from the mountainous forests, down Thunderbolts Way into the Gloucester sawmills.

As you approach Walcha, the country opens up and flattens out somewhat. Entering Walcha, it’s apparent that the Apsley River is the centrepiece of the town.

Levy banks on either side of the river have been landscaped to form a long park and it’s here you’ll find a series of sculptures. These are a part of the Open Air Gallery and hint at a thriving arts scene in the town. Several shop awnings in the main street use tall sculptures instead of the usual square posts. This gives the town a unique feel.

Of course, the original inhabitants were here long before white man arrived. The Danggadi people lived here for about 6,000 years before white man, using the tablelands as meeting places for trading and ceremonial occasions. In the colder weather they would head East into the gorges for protection.

The gorges provided plenty of food, with fish and wildlife readily available.

John Oxley passed through the area in 1818 and settlers followed in 1832, looking for land to graze their sheep. This spelt the end of the Danggadi people’s long-established lifestyle, a sad story repeated across the country.

A town began to form in the 1840s and soon established a foothold along the Aspley River. A few small gold rushes helped the town’s fortunes, with timber and grazing cementing the town’s future.

A massive flood in the 1860s prompted an attempt to move the town to higher ground. However, it’s pretty clear the locals chose to stay close to the river and take their chances.

Up the hill to the North-East, Walcha Caravan Park greets weary travellers. Luke and Tam have owned this Park since April, 2017 and have stamped their mark on it.

Continuing the good feel of this town, Luke and Tam do all they can to make visitors welcome. The Park is really neat and tidy, with excellent facilities and a AAA four star rating. An immaculate camp kitchen, shady campsites and lots of green grass welcome you with open arms.

We didn’t sample the cabins, however the amenities are spotless and recently renovated. And the hot showers… heaven! Small touches like washing powder, pegs and the choice of hot and cold water for the washing machines shows Luke and Tam know exactly what travellers need.

Unfortunately we missed the free Saturday night cook-up. Next time…

While we didn’t get to the museum, apparently it also has a Tiger Moth bi-plane. This was the first plane ever used to spread superphosphate (fertiliser) in Australia. This was a significant milestone in Australia’s agricultural history. Why? Super-spreading by plane meant otherwise inaccessible land could be fertilised, effectively trebling the carrying capacity of the land.

Machinery sheds, a slab cottage, a stringy bark trunk carved by Danggadi people, blacksmith’s shop and a wool industry hall round out the museum’s attractions.

Nat Buchanan was a drover who is buried at Walcha cemetery. Born in Ireland and eventually settling near Tamworth, he reputedly opened up more of Australia than anyone else.

He has a comprehensive list of firsts – first to cross the Barkly Tablelands East to West; first to drove cattle to the Top End; first with cattle to the Victoria and Ord Rivers; first to blaze a way through the forbidding country between the East Kimberleys and Daly Waters, creating the notorious Murranji Track; first with stock from the East Kimberleys to Murchison goldfields; and the first to travel overland from Tennant Creek to Sturt Creek near Hall’s Creek in an unsuccessful search for a suitable stock route.

Walcha is a jumping off point for the Wild Rivers National Parks. In a normal season, numerous spectacular waterfalls are a sight for sore eyes. However, we had arrived in the midst of a really dry spell so most waterfalls were no more than a trickle.

We’ll be back in a better season to check these out.

With the title of oldest town in the New England region, Walcha is a proud senior citizen. However, Walcha has a lot of years left in her yet. With a vibrant arts scene, strong agricultural base and a town full of hope and life, Walcha’s future looks bright.

Stay a while and soak it in. You’ll love it!