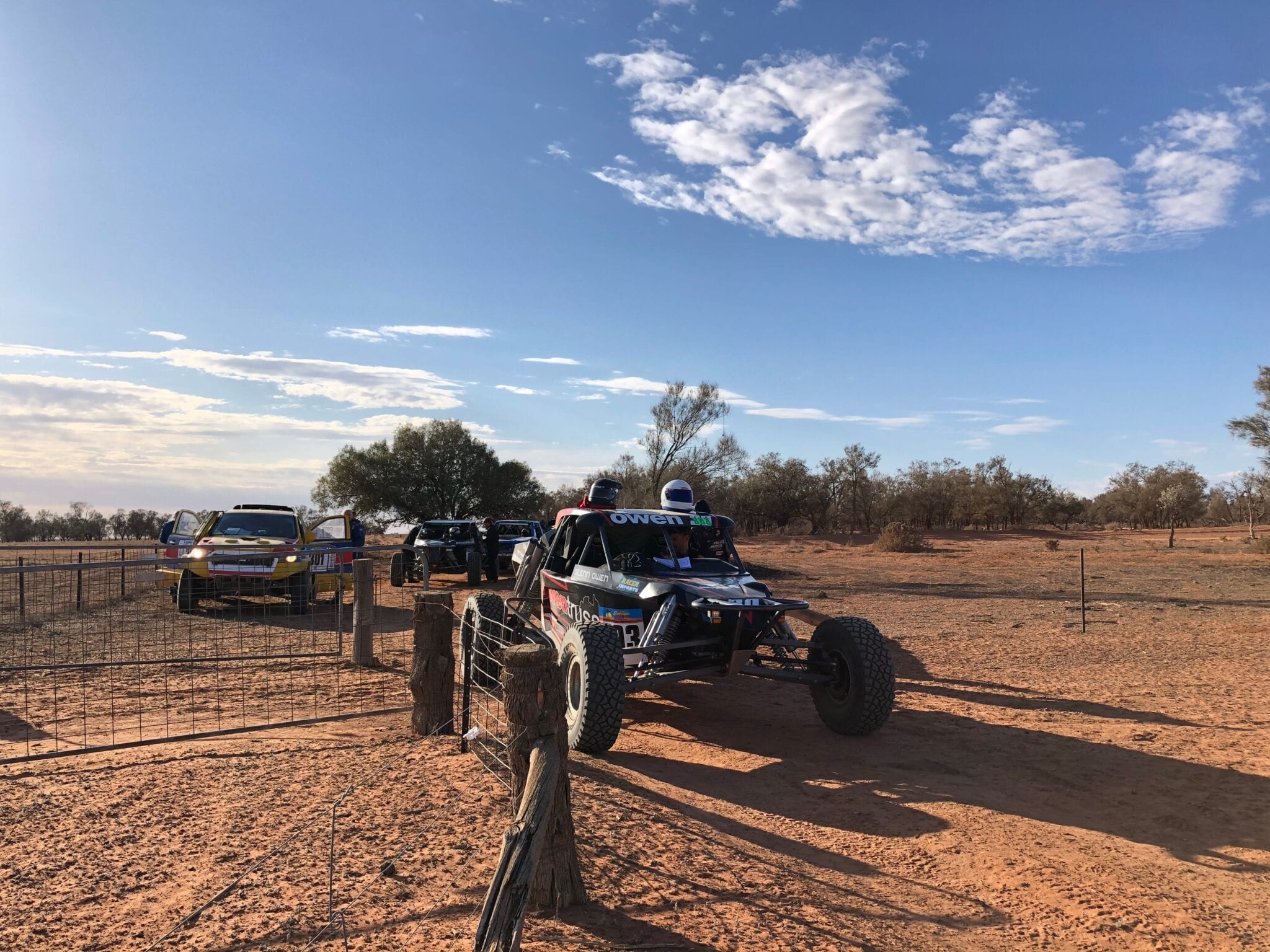 If you want to get up close and personal at an off road race without actually competing, what better way than volunteering as an official.

We’ll take you behind the scenes as control officials for the Sunraysia Safari, held at Wentworth NSW every year. It’s a bit of everything… camping out at some sensational spots, getting to know the competitors, a feeling of camaraderie among the officials and competitors, and a few tense moments.

Oh, and the food is unbelievable!

What Is the Sunraysia Safari?

It’s an off road event held every year around August/September out of Wentworth in NSW. Competitors come from all over Australia and a few from overseas, to compete in a four day race through outback NSW.

So the race is more about reliability and keeping focused, than about flat-out racing.

The entire race is run on private property. The race organisers work closely with local farmers who generously offer their properties as race tracks. Most of the safari is run on farm tracks, so some of the tracks can be pretty rough.

To make things even more interesting, it’s a navigational race. Every competitor has to navigate from start to finish. And it’s pretty easy to get lost in this flat country, with few landmarks or reference points.

If you’re not interested in competing but want to be a part of the fun, then volunteer as a control official. This is an ideal way to get involved.

A control official is basically anyone who helps out as an official out on the tracks. You might be sent out to a race stage to be start controllers. You set up the sign boards and then send the competitors off at designated times.

Or you could be a finish controller. You set up the sign boards and record finish order and times.

If this sounds a bit scary, don’t worry. Sunraysia Safari uses an automated system called RallySafe. This runs by GPS and knows the position of every competitor at any given time.

So RallySafe does most of the hard work. It records the time competitors start and finish, as well as tracking their position at all times. And RallySafe has stacks of extras that keep the competitors safe should they break down or have an accident.

Control officials might also be called upon to monitor road closures. This is where a road is closed due to the race being run. All you have to do here is make sure no one drives in and onto the track.

There’s also a few places where the race crosses public roads. Control officials keep an eye out for traffic and stop the race vehicles until the coast is clear.

Whatever the role assigned to you, it’s plenty of fun… and a great chance to get into places you normally can’t access.

Why’s the Sunraysia Safari so Much Fun?

It’s the atmosphere. Everyone’s in a good mood, excited to be part of the event. As an official, you get to meet people from all over the country and from overseas.

Even better, you get to meet the locals. The landholder generally shows up and has a yarn, plus there’s usually a crew from the local Rural Fire Service at the start of the stage.

The locals are a fantastic bunch, so supportive of the Safari and really interesting people. They’re doing it hard at the moment, yet they somehow manage to keep positive.

You always get one or two funny things happen during the event. Like the bike rider whose pocket zip wouldn’t do up. There we were… the bike rider, Peta and me all furiously trying to repair his zipper while his start time ticked away. Eventually we gave up and he disappeared in a cloud of dust.

The whole event has a good vibe. The top runners are there to win of course, however everyone helps each other to finish the event.

The day before the race, you have an officials’ briefing. Event manager Troy Bennett runs you through what’s expected and you’ll get a rundown of the RallySafe system.

Then you pick up your sign boards, stickers for your vehicle, RallySafe tablet, paperwork for the race, designated places for the next four days and off you go!

They hand you a mud map of where you need to go and all of those have GPS co-ordinates. So you can easily pin them as points on your GPS navigation device.

We’re self-contained in our truck camper. So we camped out overnight at each control point, ready for the next morning. Officials generally either camp out or stay overnight in Wentworth.

Since we were self-contained, Troy sent us out to some of the furthest control points from Wentworth. Stocked with plenty of water and food, we left Wentworth knowing we’d be out of town for four days.

The travelling is half the fun. Most of the distances between control points are quite long… it’s nothing for them to be 250km apart. The best thing is you get to explore the area, going on back roads you normally wouldn’t even notice.

We were assigned to four stage starts, since we had experience from the year before. On the first stage we were accompanied by Graham and Trevor. This was Trevor’s first year, so Troy put them with us to gain some experience.

Since we’re self-contained, we try to get to the next day’s control point the night before, set up the sign boards and generally make sure everything’s in place.

You need to be ready a few hours before the first bike is due, as sometimes they arrive early.

When you’re at a control point, it’s a bit surreal. Say you’ve camped there overnight and sat by the fire, surrounded by complete silence.

Morning arrives and you get ready, checking and re-checking to make sure everything’s in order. The first bike breaks the silence and isolation, then it’s on for young and old! Noise, activity, a thousand questions.

Finally, the last car leaves. The silence and isolation settles back over you and you’re alone again, as if nothing ever happened.

The dirt bikes start first, followed by the cars. You’re given a designated start time for the first bike by the race controllers. I enter the start time and bike/vehicle number into the RallySafe tablet then record it manually on a sheet (as a backup). RallySafe automatically allocates a start time and sends this to the display on the bike or vehicle.

Peta fills out the time cards for the competitors, answers any questions and keeps them all running smoothly. And since the bike riders are heavily kitted up with helmets, gloves and the like, she also helps them figure out their check-in times, put time cards in their pockets, zipping them up and so on.

The car crews are different. They have a driver and navigator, and one of the nav’s jobs is to make sure they check in and start on time. So they can be quite particular about timing.

Once the last car has started, it’s time to pack everything away and make sure the area is spotless. Then you move onto the next control point.

I have to mention the food!

Veal schnitzels, hamburgers, roasts and salads for mains… all home made from scratch of course. Then the ultimate, home-cooked cakes to die for. These lunches were the highlight of the Sunraysia Safari!

It was just by sheer luck we managed to score these lunches on three of the four days. As we travelled between control points, we happened to pass the lunchtime service points. And there was no way we were going to drive past without stopping!

You may or may not score one of these lunches. It depends on where your control points are. But if you get the chance, whatever you do make sure you have a feed!

This year, two of the lunches were at Pooncarie. We wandered over to the Old Wharf Cafe, grabbed a coffee and had a yarn to Bob and Barb. The coffee’s great!

If you’re looking for fun, adventure and something a bit out of the ordinary then why not volunteer for the Sunraysia Safari. It’s run every year in August or September.

You’ll have a lot of fun, get to meet fantastic people and maybe even score one of those famous lunches…

To find out more about volunteering, go here to contact the organisers.

The Sunraysia Safari is run on Barkindji and Barindji Country.