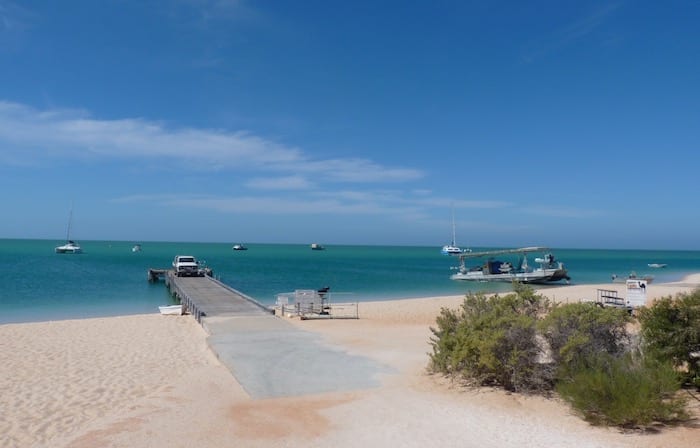 Shark Bay, Western Australia – So Much To See And Do!

Shark Bay is famous for the dolphins of Monkey Mia. However, there are lots of other attractions worth seeing. By far the strangest attraction is stromatolites…

Stromatolites are weird. They look like rocks standing in the water. But they’re not. Microbes build them at the breakneck pace of about 1/3mm per year. So a one metre high stromatolite is pretty old…

Why are they called “living fossils”? Well the microbes are very similar to those found in 3-½ billion year old rock. They also happen to be the earliest known life on Earth. So these little fellas are pretty special.

Hamelin Pool is at the southern end of Shark Bay. It is one of only 2 places on Earth where marine stromatolites still exist. Why here? Well, the microbes love salty environments. Hamelin Pool has all the ingredients – it’s at the opposite end of the Bay’s entrance, the water is shallow and the evaporation rate is extreme. The result? Super-salty water at Hamelin Pool.

Dugongs are known as sea cows. They love seagrass. And Shark Bay happens to have the world’s largest seagrass beds.

They are fascinating mammals. Growing up to 400kg and 3 metres long, dugongs have to surface each time they need to take a breath. Dugongs hang out in warm, shallow, protected waters and spend their life eating. Sounds like a good life to me!

You’ll have a lot of fun snorkelling at Shark Bay. There’s so much happening under the water. We snorkelled at Monkey Mia. The seagrass starts not far from shore. So it’s perfect – you basically see two completely different ecosystems within a stone’s throw.

First you have to negotiate the thousands of funny little hermit crabs waddling around in their top-heavy shells. Then you’re into crystal-clear waters. You’ll see countless fish, small stingrays are common. We were lucky to see a small shark – about 60cm (2 feet) long – in amongst the seagrass. We swam right over the top of it.

Just be careful and sensible about where you snorkel. Remember it’s called Shark Bay for a reason. Nearly 30 species of shark call this place home. Most are harmless. But a few are quite partial to the odd human in their diet now and then.

To illustrate. Ben and I were snorkelling in shallow water over the seagrass. An inflatable dinghy cruised past and the man yelled out to us. A large stringray was following us – it was probably just curious. But a shark about 150cm (5 feet) long was following the stingray! So we decided we’d had enough of snorkelling for that day…

The Display Centre is excellent. Monkey Mia is a world-class dolphin research centre. So the emphasis is of course on dolphins. Dolphins are highly intelligent and therefore complex mammals with very advanced hunting and social skills.  The documentaries being screened were particularly interesting. There’s also great information on Shark Bay and other marine inhabitants, such as dugongs. Very educational and well worth a visit.

Where Should You Stay?

We stayed at Monkey Mia campground. It’s not cheap, but it is protected from the easterly gales that sweep in from the ocean. We were there late January, so the temperatures were in the high 30s (celsius). The campground consists of hard-packed white cockle shells and white sand, so take your sunnies. If you’re lucky like we were, you’ll find shade from the afternoon sun.

Just be wary of the resident emus in the van park, otherwise known as the world’s dumbest creatures!! People foolishly feed them so they’re a pest. They get into anything not tied down. And you thought seagulls were annoying…

Accommodation is available at Denham but the wind will blow the leaves out of your tea. There’s bush camping along the beach in Francois Person National Park. But once you’re there you won’t want to drive out to go sightseeing.

You have to drive through Denham to reach Monkey Mia. It’s a sleepy little town facing the open ocean. Like most of the vast Western Australian coast, if the wind isn’t blowing a gale off the ocean, then it’s blowing a furnace from the desert instead.

The turn-off to Francois Peron National Park is on the road between Monkey Mia and Denham. Typical coastal scrubby country with not a tree anywhere. It used to be a sheep station believe it or not. God only knows where they found water for the sheep.

A track takes you right to the tip of the Peron headland – about 30km. It is 100% a 4WD track; really sandy and fairly corrugated. This time I had the sense to lower tyre pressure BEFORE getting bogged and we did most of the track. I finally lost my nerve near the end when the sand started getting even deeper and softer.

Sand driving is great fun but it’s really hard on the vehicle – ploughing through all that sand is hard work. I’m cautious about where I will and won’t go when travelling without another vehicle – especially with my family on a stinking hot summer day.

What Else Is Around Shark Bay?

Steep Point is the western-most point in Australia. We didn’t go there due to the hot weather, but apparently it’s a sandy track all the way out and back. Be prepared and give it a miss if you’re not an experienced 4WDer.

For more ideas, have a look at this interactive map. It’s really quite surprising how much there is to see and do around Shark Bay.

If you’re looking for cruises, tours and accommodation around the Shark Bay area, TourRadar have a wide selection for you.

Shark Bay is on Malkana Country.