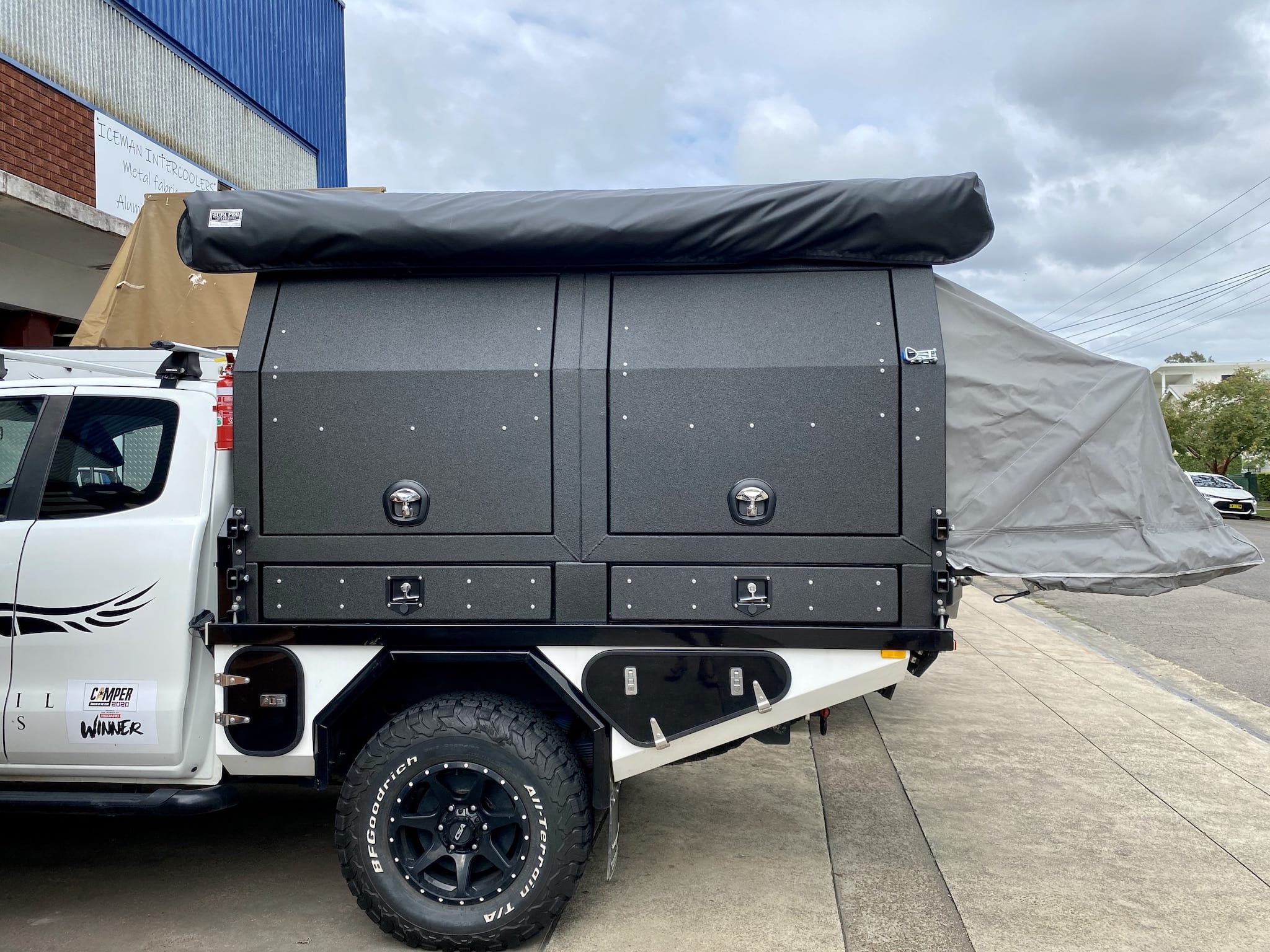 When Wedgetail Campers released their Hawk, they brought a touch of class, style and practicality to the ute canopy camper market.

Far from just another aluminium box with doors, the Hawk carries on the Wedgetail Camper tradition of quality, innovation and versatility.

The Hawk is Wedgetail Campers’ response to the highly popular tray-back canopy camper market. They’ve managed to produce a unit which ticks all the boxes, and then some.

The judges from Australian Camper Trailers obviously agreed, awarding the Hawk the best Slide-On Camper for 2021.

We were fortunate to see one in the flesh recently. It’s an impressive unit.

A Single, Extra-Cab or Dual Cab Camper… Your Choice

Time didn’t permit us to take the Hawk out for weekend review. However, just a quick look-through confirmed this unit has all the goods. And it’s proving to be a remarkably popular unit.

Why wouldn’t it? It’s affordable, lightweight and has an options list as long as your arm.

The Hawk lifts off the tray on a set of legs. So you can have a free-standing slide-on camper and the ability to use your existing work ute.

One of the standout features is its modular design. Let’s strip the Hawk back to bare bones for a second. There’s a base module, which is the rear sleeping compartment.

Then on the front, you specify which module you want… the shorter one for dual-cab utes or longer ones for extra-cab or single cab utes.

Underneath, you can add full-width roller drawers.

We’ll take a look at these modules in more detail.

The sleeping module has a clever innovation… one of those ideas you look at and think, “Why hasn’t anyone done this before?”

The Hawk has a drop-down rear door with an integrated canvas section and large window. Inside is a folding queen mattress. To set up, undo two clips, fold the rear door down, attach a couple of canopy bungee loops, unfold the bed and it’s ready to sleep in.

Total time to set up? About one minute!

Even more importantly, pack-up only takes a minute or two as well.

And while we’re in the sleeping module, here’s a few luxuries you might want. A stereo system, fans, a TV… it’s up to you and your budget.

Large gull-wing doors on both sides give you easy access. You can also choose flyscreens across the door openings, so you can leave the doors open at night without getting smashed by mozzies.

This is where all the “fun bits” live. In the unit we looked at, it was fitted out with some brilliant gear.

First there’s the water tank, with filler on the outside driver’s side. Sitting on top of this is a 10 litre Mercury RV 12/240V hot water system, feeding a shower head and a hot and cold tap on the kitchen (left) side.

And the electrical system is a beauty.

Why all the electrical grunt? Because the passenger’s side reveals a Dometic upright fridge, Travel Buddy 12V oven and a CAMEC 1,000W microwave oven.

Another benefit of the REDARC TVMS is being able to control everything from your mobile phone. Wedgetail Campers have installed central locking on this unit, which is controlled through the TVMS app. A clever touch.

But just because this unit has been set up as described doesn’t mean yours has to be the same.

You can specify anything from an empty box to a fully kitted out module. Many Hawks go out the gate with the ever-popular drop-down fridge slides for example.

You can choose to get the bare-bones unit, a fully kitted-out ute camper like the one we saw or somewhere in between.

That’s why it really is the most versatile ute canopy camper… everything is easy to access and simple to operate. Plus, you get to choose the extras you want and have the option of a single, extra or dual cab version.

In the photo below, you might be able to see a small benchtop screwed into the left (front) drawer. Hiding under that was a portable electric cooktop. So the front drawer doubles as a kitchen bench.

The rollout drawers are huge and hold all those extras you usually don’t have a hiding spot for.

This unit had two awnings, one each side. One was a gullwing awning, giving you a huge undercover area on three sides. A fixed solar panel sat on the roof.

Many owners specify rooftop tents instead. This opens up a whole new world of options. Or you can add roof bars to carry kayaks, bikes or whatever else takes your fancy.

If you can imagine it, describe it and it’s actually physically possible, then Wedgetail Campers will build it for you!

The frame and body are made from aluminium to keep the weight down. Once the modules are assembled, the unit is painted in a special Kevlar paint with a striking hammertone finish.

It looks fantastic, especially the engraved Wedgetail Hawk logo on the rear door and inside the gullwing doors.

Wedgetail Campers are renowned for absolute premium quality products. The experience, knowledge and built quality gained from their premium grand tourer the Wedgetail 22, carries over to the Hawk.

In fact, the Hawk has been so successful that they’ve discontinued the Wedgetail 18. The 18 was a trimmed-down version of the 22, designed to fit on a dual cab ute.

So if you’re after a high-quality Australian-made ute canopy camper, then have a talk to Darren or Lucas at Wedgetail Campers. You can customise it to suit your needs and budget.

And speaking from experience (we have an older model Wedgetail 22), Wedgetail Campers’ after-sales service is second to none.

The Hawk is lightweight, yet strong and competitively priced. Go here for more details on the Hawk.

This really is one of those units you have to see in the flesh to truly appreciate it. It’s a complete package.

Note: We have no affiliation with the Wedgetail Hawk. We have a $500 discount deal with Wedgetail Campers (Wedgetail 22 only). Having said this, all our articles and reviews are 100% upfront and honest. We tell it how it is.