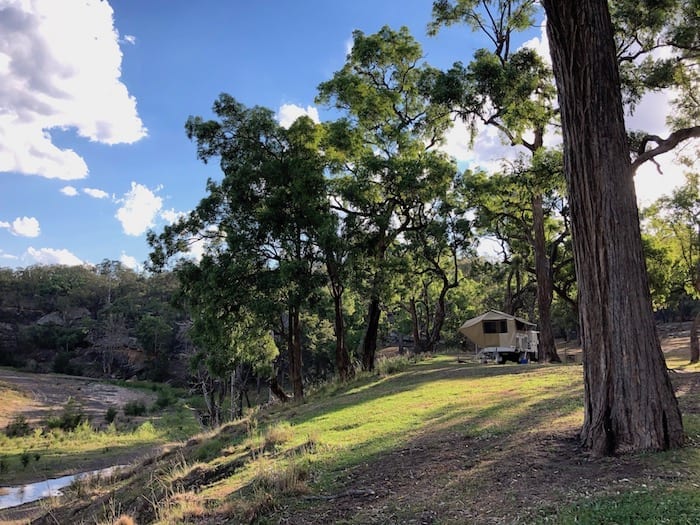 Goulburn River National Park is only 300km North-West of Sydney, yet it feels like a million miles away. If bush camping in a rugged sandstone landscape sounds good, then this place is for you.

Goulburn River National Park sits just North of Bylong and North-North East of Mudgee in New South Wales. Access is from the South, via the village of Wollar.

Wollar is all-but abandoned now, due to the local coal mine. How we allow coal mining in such productive country is beyond me.

You cross a railway line (watch out for the endless coal trains) and the road turns to dirt. This road is fairly corrugated and has numerous rock outcrops. It’s definitely not suited to caravans, however you’ll drag a camper trailer through fairly easily if you take some care.

In sharp contrast to the magnificent countryside around Mudgee, your climb over Munghorn Gap then into the National Park is through a sparse rocky sandstone landscape. In fact, it’s almost barren in places. You really do enter another world.

You have two bush camping sites to choose from. Spring Gully is the main camp site, with Big River a couple of kilometres further on.

Both have numerous camp sites, drop toilets, picnic tables and fire pits with barbeque plates. Make sure you bring in your own firewood and take note of any fire restrictions.

Bring your own drinking water too. National Parks recommend boiling all water taken from the river.

National Parks describe Big River as 4WD accessible only. However the road is no worse than what you’ve just driven on, so I’m not sure what that’s all about. Although, I suggest checking the weather forecast carefully if you’re travelling in a car. It could get interesting in the wet!

Be aware there’s no mobile reception at either campground.

Camping on the River

Both camp sites are on the edge of the Goulburn River. Scramble down reasonably steep banks and you’re in the river!

We arrived mid-February, in the midst of a hot spell. Not surprisingly, we had the entire place to ourselves. So we chose a fantastic site under numerous shady trees at Big River Campground. With a recent dry spell, the river was very low and hardly flowing. However, you’ll find a few decent pools just downstream of the campground.

With temperatures in the low 40’s and a hot Westerly blowing like a furnace, swimming was a welcome respite from the heat. As a reward for your efforts, you might see turtles and large goannas in and around the river.

Our second visit was a couple of years later, in mid-November. Nothing much had changed, apart from the river flowing more strongly and other campers being about. Hot days and warm river water were the ideal combination!

Goulburn River valley was used as a trade route between the coastal and inland Aboriginal people. Apparently, there are many hand stencils and evidence of occupation in some of the sandstone caves along the river.

It’s easy to see how this was a popular trade route, with abundant food and water available and endless shelters provided by the sandstone formations. If I had to walk between the Western Plains and the coast, this is the way I’d be going too. A walk along the river is a much better alternative than pushing through barren sandstone country, interspersed with thick scrub.

Pulling into Big River Campground mid-afternoon, we disturbed a large mob of kangaroos snoozing under shady trees. While they didn’t seem to mind too much, one giant buck was none too pleased. Oh well, you can’t please everyone!

As the afternoon gave way to dusk, the campground came alive with kangaroos and cute red necked wallabies. Up and down the river, there were several roos and wallabies having a drink, getting ready for the night ahead.

After such a hot day, they too needed a good drink. Multi-coloured parrots, cockatoos, crows, currawongs, friarbirds… all sorts of birds. And of course, just on dark the ever-reliable kookaburras welcomed in the evening.

When darkness fell, we were treated to a carpet of stars and a lightning display way off to the East. The wind had dropped and the night noises began… kangaroos snorting, possums arguing and the occasional restless bird deciding to relocate to a better neighbourhood.

This was one of those black-as-ink nights where you lie in your camp chair and just take in nature. Awesome!

Early morning brought the kookaburra alarm clock, then the hundreds of different bird calls after the kookaburras had done their thing.

Then I heard munching sounds…

Gazing out the window through bleary eyes, I saw dozens of kangaroos surrounding our camper. And they were all noisily munching away on grass, getting their fill before clocking-off from another night shift. Can’t say I’ve ever been kept awake by the sound of kangaroos eating before…

Another regular was a family of goannas, one of which was enormous. It appears other campers have had the sense not to feed them, so thankfully they’re not aggressive.

The biggest goanna actually climbed into the (cold) fire pit, had a look around then stepped out again.

They’re amusing to watch. If you approach them, they shrink down to the ground and stay perfectly still. It’s almost like they’re saying, “You can’t see me now, I’m invisible”. Their antics kept us entertained for hours. In contrast, the birds went ballistic when the goannas climbed trees in search of eggs or young chicks. That’s nature.

Goulburn River National Park is a pleasant surprise. Having driven past this area countless times, we had no idea this place existed. We appreciated being able to get into this country and spend some time here.

Take the time to drive in and stay a few days. You’ll be glad you did.